When Post Traumatic Stress Disorder hit me in Fall 2015, the most visible symptom was trichotillomania –  the compulsion to pull out your hair.  I was already familiar with this disorder, which afflicts less than 2% of the population (predominantly women), because I have had a mild case since high school.  At particularly stressful times, without realizing it, I yank at the hair behind my ears.  Pulling my hair out was just another one of the anxiety symptoms I “successfully” coped with during decades of high-functioning dysfunction.

Then PTSD amplified my trichotillomania exponentially.  Every day, all day, I struggle to stop myself from ferociously rubbing my forehead and pulling out the hair on my scalp.  Most of the time I’m unaware it’s happening.  But eventually I notice my arm is blocking my vision, or I feel my forehead throbbing.  By the end of the day my scalp is raw.

Trichotillomania is not just for people living with PTSD, although there is a high correlation.  The Trichotillomania Learning Center, now rebranded as the “TLC Foundation for Body-Focused Repetitive Behaviors,” has a helpful website.  Google sends you to ghastly Pinterest photos of women who have mowed broad bald swaths across their skulls, or compulsively plucked and then eaten their eyebrows and eyelashes.  (Yes we know it’s gross.)  Although my own version of this compulsion hurts and makes me terribly self-conscious, I am relatively fortunate.  As a middle-aged dad with thinning hair, my localized handiwork is pretty inconspicuous.  I just have to avoid posting Facebook selfies showing how my hairline has receded more on the right side than the left, leaving a reddened patch of skin in its place.  Hopefully no one notices me too much as I poke away during the day.  Other than my children, who delight in calling out “Hands, Papa!”

People embrace various techniques to cope with trichotillomania.  I found my fuzzy things serendipitously.  Long ago I had a favorite stress squeezeball, a miniature blue and green Earth I’d gotten as a lefty marketing promotion somewhere.  It was just the right size and soothing squishiness.  So when the scalp-rubbing began driving me crazy, I went to the basement and sorted through all the kids’ old balls to see if I could replace my lost globe.  I felt like Goldilocks, frustrated to discover each was too hard, or soft, or big, or small.  Finally, I found one that felt just right – but it wasn’t a ball after all.  It was a balled-up oversized pipe cleaner, left over from some forgotten art project.  I now buy them in bulk at Michael’s craft store, then cut each up into eight-inch strips.  They’re soft and squeezable, but you can also fiddle with them, or use them to tie up your fingers.  They work pretty well at keeping my hands occupied, or at grabbing my attention as I see them approach my forehead.  But they’re not 100% effective.  And they eventually wear out after a few heavy-duty hours, breaking up into fuzzy fragments with sharp metal protrusions.  In a pinch I once tried using regular-sized pipe cleaners, but they just poked me.  I still end most days with a sore forehead, but it could be worse. 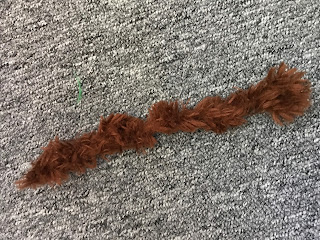 When I was still general-counseling at the university, I felt much less self-conscious during meetings if I fiddled with my fuzzy things rather than picking at my forehead.  For further camouflage – and to impress my mother with my penny-pinching – I bought only the brown ones.  They’re $1.99 for a 6.5 foot brown strand at Michael’s, rather than $2.99 for the more luxurious colored ones.  And on some level the boring brown ones felt a little less obtrusive.

For more than a year, I left a trail of tattered brown fuzzy remnants behind me.  Last summer when Vancouver Men’s Chorus travelled to Denver to sing at the quadrennial festival of LGBT choruses, one of my friends from Seattle Men’s Chorus retrieved a brown fuzzy he’d found on the sidewalk in front of his hotel.  The shallows at our favorite beach on Whidbey Island are filled with short brown seaweed strips at low tide, so it looks like all my brown fuzzies have swum back to find me.

One day I ran out of brown fuzzy things at work, and had to rely on one of the kids’ purple ones during an important presentation.  It made me feel like a peacock with OCD.  I felt compelled to take the opportunity afterwards to privately come out to an important client about my disability, convinced he must have been staring at me throughout the meeting.  Of course he hadn’t noticed anything, but he was gracious nonetheless.  (It turns out the parents of self-conscious teens were right all along – most people are too busy worrying about themselves to pay attention to you.)

Even if they weren’t too oblivious to notice my fuzzy things, most folks in the Pacific Northwest are much too polite (and passive-aggressive) to comment on others’ kinks if they did notice.  Except for baristas and children.  And other anxious people.  Like the Uber driver who let me hold her squeeze ball.  Or last fall, when a stranger in the grocery line admired my fuzzy thing, then showed me the elaborate metal clockwork device she uses to sooth herself.   She claimed she’d made it herself, but it looked like she’d actually broken it off the set of Wicked.  (It turns out she was prescient – fidget spinners are this year’s pet rock or Pokemon Go.  I tried stealing my early-adopting daughter’s metal spinners, but they don’t work for me.)

After I gave up on salvaging my job and chose to come out publicly as a person living with mental illness, I abandoned my cheap brown fuzzy things.  Instead, I started splurging on the fluffy green ones.  They’re more comfortable, last longer, and green has always been my favorite color.  And I don’t want to hide any more. 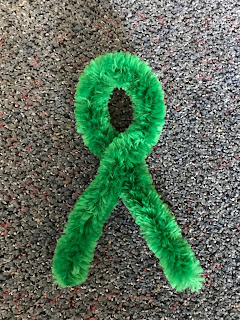 Soon after my PTSD symptoms erupted in 2015, I started rehearsing for my last concerts with Seattle Men’s Chorus.  The commute from Bellingham was miserable, but I wanted to be part of Dennis Coleman’s final holiday concert before he retired after 35 years.  And to earn my 15 year chorus pin.  Then as my symptoms continued to get worse, I began to worry that I wouldn’t be able to perform on stage without either pulling out my hair or fiddling with fuzzy things.  Fortunately, it turned out I can make it through actual performances without any embarrassing incidents.  (TMI:  so far sex is the only other time I’m sufficiently focused to evade trichotillomania.)

I began rehearsals with Vancouver Men’s Chorus in January 2016, just as things with my abusive former colleague were really going to hell.  I soon upped my fuzzy thing consumption like a chain smoker on Death Row.  By the time our first concert approached, I was fiddling with two or three fuzzy things at a time.  I could tell our conductor was alarmed, but also that he was much too gracious and Canadian to say anything to me.  So I took Willi aside and assured him I would be fine during performances.

Willi was right to be concerned.  PTSD also amped up my social anxiety, particularly around gay men.  The result is an awkward paradox – besides my family, spending time in Vancouver with my chorus brethren has been the brightest spot in the darkness, but it’s also excruciating.  I spend most of my nonsinging time alone clinging to the wall, and go through more fuzzy things in an evening of rehearsal or socializing with the chorus than I consume in several days of ordinary life.  But it’s still worth it.  And despite living through a series of biblical plagues over the last two years, and despite being resigned to my bleak professional and social prospects here in Bellingham, I can’t quite give up being hopeful.  (It’s probably yet another curse.)  Chorus helps.

This month I again performed with Vancouver Men’s Chorus in six sold-out shows on Granville Island.  Closing night was amazing, even though by the final curtain I had lost all my green fuzzy things.  (I suspect my friend Jon stole the last one.)  The audience was marvelous, we sang particularly well, I remembered more of my choreography than ever, and the kids were with Jason and Brenden for another week.  Rather than slink away home, I decided I was brave enough to go out to the bar with everyone afterwards, even without any fuzzy things.

Numbers is a longstanding institution in Davie Village, a neighborhood bar that welcomes all types to several floors of dancing, pool, drinking, talking, and karaoke.  I have been coming to Numbers since I graduated from law school, which is longer than my drinking buddy Jon has been alive.  And I have many happy memories from the place, mostly from the early nineties before the Internet ruined gay life, and before having children made me too tired for carousing.  But now those happy Vancouver memories include closing Numbers for my first time ever – further surprised to discover the bar now has a liquor license that goes till 3 am.  I had a blast, drinking and chatting with friends and strangers.  (But not flirting or dancing.  Baby steps.)   After entering the karaoke booth to cheerlead several divas from the chorus, arguably I even participated in karaoke for the first time.  But only if you count harmonizing along with half the chorus in Whitney Houston’s “I Wanna Dance With Somebody.”  Which I don’t, because I’m both gay and suffer from compulsive disorders.  Like trichotillomania.

In any event, I had another great night at Numbers.  And for the first time in over a year, despite being surrounded by other gay men, I went for more than five waking hours without either pulling my hair or clinging to my fuzzy things.

As with so many faery midsummer night fantasies, the next morning I woke up with life back to normal, clutching at fuzzy green straws.  But I can dream. 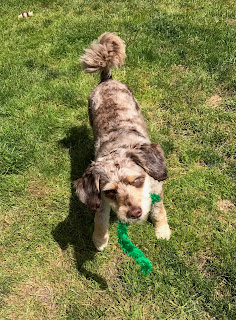