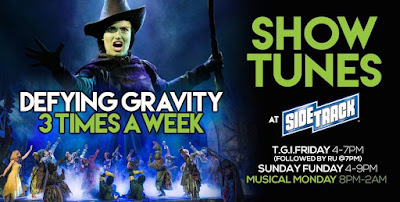 Or anyone else, for that matter.

But I’ll start with an actual fun thing. Many folks consider Chicago’s Sidetrack to be the best gay bar in the country, perhaps in the universe. It is beautifully designed, with multiple bars spread  throughout tastefully designed rooms and patios.  It is conveniently located in the heart of Boystown, just a few blocks from my old apartment. My bartender crush, who still works there, has held up much better than me. He still serves frosty mugs full of my favorite purple frozen slushie drink.  Every week buses stop at the corner of Halsted and Roscoe to unload a new shipment of corn-fed boys from across the heartland, following their gay city dream.

Damn, I miss the old days. Before the internet and smoking bans, when you still had to go to a bar for human contact, sex, or dates. It was well worth coming home with smoky clothes and liver damage.

What makes Sidetrack special is its mix of music and videos, lovingly curated by co-owner Pepe. Thursdays are comedy night, including clips from classic TV shows. Monday nights are my favorite:   Showtunes. My friend Charles and I had a standing date every Monday night. I’d watch “Ally McBeal” alone at home, then walk through the snow to Boystown. We would gossip about Chicago’s A-gays, point out the cute guys as they aggressively ignored us from across the bar, sing along with Seymour and Audrey, or watch Jennifer Holliday belt out “And I’m Telling You” for the millionth time. And we’d each vow to have only two purple slushies. There is a point in those frosted mugs, about a third of the way down your second slushie, where you feel your toes start to tingle. A fourth purple slushie becomes inevitable. Or fifth.

I recently realized my entire knowledge of pop culture comes from the Sidetrack video clips that Charles and I watched during our first vodka-infused slushie each Monday. (After that I can’t remember anything.) 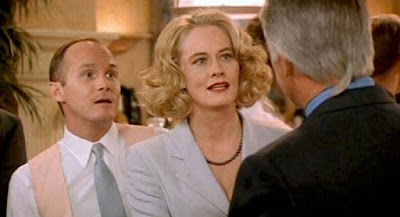 This week we are celebrating the twentieth anniversary of Ellen’s coming out episode. Before Ellen there were lots of gays on TV, of course, including the unnamed bitchy waiter on “Cybil.” I recently stumbled upon an episode featuring him, and realized there were B and C plots I’d never seen. At Sidetrack we only watched the gay subplot, over and over. Cybil invites the waiter home to cheer him up by watching “Mommy Dearest.” She discovers he’s depressed because his boyfriend recently dumped him, and this very night the ex and his new boyfriend are throwing a party at the fabulous apartment the waiter used to share.

Cybill’s advice: “Don’t stay home and be a victim. You crash that party and be a martyr!”

Thursday night was the twelfth annual banquet for members and supporters of Q-Law, the LGBT Bar Association of Washington.  I’ve gone every year. I am one of the distinguished Old Gay Men and Lesbians who serve on Q-Law’s Advisory Committee, so I get to sit at the grownup table with State Supreme Court justices and law school deans.

Last year the Q-Law Banquet was excruciating. Although I was still technically employed at the time as WWU’s general counsel, I was stuck on my abusive administrative leave and about to be fired the following week. So all evening I had to listen to judges and lawyers gushing about my amazing new gig in Bellingham working with the wonderful folks from the Washington Attorney General’s Office.

Ducking questions at Q-Law last year reminded me of when I came home from Chicago for my brother’s wedding. I didn’t want to draw focus by coming out to the various family friends who probably last saw me when I was leaving for my Mormon mission in Korea. However, I had just moved to Chicago with my first boyfriend, to be a LGBT rights lawyer for the ACLU. I didn’t realize that left me with exactly zero nongay material for cocktail chatter. Afterwards I vowed I would never again intentionally or accidentally wander into to such a closet.

This year I could have avoided embarrassment and awkwardness by skipping the Q-Law banquet. I’m sure there are plenty of unemployed lawyers who watched Netflix rather than facing their peers at another painful schmoozefest. But I refused to cower at home as a victim, or to stay unnaturally silent again. Instead, I chose to crash the party and be a fabulous martyr. Pass the dip.