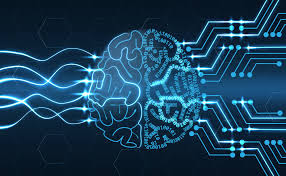 The hallmark of intelligence is learning from experience. To demonstrate “Artificial Intelligence,” a computer must do more than briefly fool you into thinking it’s a real person. Instead, successful AI is capable of updating its own program and adapting to changed circumstances.

AI technology has come a long way in recent years. Have you complimented Siri or Alexa lately for picking up your family’s distinctive speech patterns? Or noticed when autocorrect makes a creepy stalker-esque suggestion for finishing your sentence?

This month I had three dubious encounters with Artificial Intelligence:

Facebook recently updated its algorithm for determining what appears in your newsfeed. Supposedly the changes are intended to make the user experience more interactive, and less driven by Russian trolls.

However, one consequence of Facebook’s changed formula is that my blog readership statistics suddenly dropped precipitously. Friends still get an ample supply of pictures of my adorable children and my beard, but Facebook has decided the blog is too much for most of you.

I’m a codependent person. It only took four tries to figure out it’s not me, it’s you. (Or rather, it’s Facebook – presumably they want me to pay to “boost” my blog posts.)

So if you want to know when I post a new essay you’ll have to do something slightly proactive, such as “following” me on Facebook, or subscribing to my website at www.rogerleishman.com, or just bookmarking the site and checking in on the blog two or three times a week. [Ed. Note: Perhaps on Tuesdays, Thursdays, and Sundays.] Remember you can always search the blog archive to see if you've been mentioned.

I’ve had the same checking account at Seattle-First National Bank since 1989, when I was a summer associate at my now-defunct first law firm. Seafirst Bank is defunct too, acquired by Bank of America long ago. It takes me a while to acknowledge change.

Most of my banking migrated to Washington Mutual years ago. (Yes, I know Chase swallowed WaMu during the financial crisis. Denial.) Nowadays I only use my Seafirst account for foreign travel. Unlike Chase, Bank of America has arrangements with numerous foreign banks that allow you withdraw cash from their ATM networks without fees. For example, when Seattle Men’s Chorus toured Germany a few years ago, I used cash machines at Deutsche Bank and Barclays as I traveled around Europe.

In Canada, our banking partner is the ubiquitous and user-friendly Scotiabank. Scotiabank also happens to be a major sponsor of Vancouver Men’s Chorus. In fact, you can buy some of the few remaining tickets to our Christmas concerts at the Scotiabank branch at Robson and Bute, and the bank will match your purchase with a donation to the chorus.

Anyway, before driving up to Vancouver for chorus last week, I noticed my BoA account had a low balance. I visited the bank branch in Bellingham to deposit a couple of $30 checks I found under a mattress.

Across the border an hour later, I stopped at a Tim Horton’s with a Scotiabank ATM to withdraw cash for my after-rehearsal beer. But my debit card was repeatedly declined.

Assuming it was just a Tim Horton’s thing, I tried the Scotiabank branch on Broadway. This time the ATM told me my account had been frozen.

A few minutes later, I got a text message asking to confirm that I’m really me. An automated alarm had gone off with the bank’s Fraud Protection Services. They didn’t believe someone would deposit beer money into his account, only to withdraw it in another nearby country later that same afternoon. Obviously the bank hasn’t been paying attention to my travel and spending habits for the last three years. 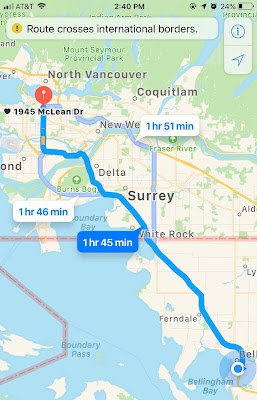 This fall Vancouver Men’s Chorus moved to a new rehearsal space, after decades in the Kitsilano neighborhood near downtown. As you may have noticed, I’m generally against change. Nevertheless, our spacious new location at the Vancouver Opera offers many amenities, including ample parking, a kitchen, and a mirrored wall for observing dance moves. Because my children are coming to rehearsal tonight – tomorrow’s a holiday in the States – I’ve already figured out the WiFi password.

I hadn’t spent much time in East Vancouver before. So I’ve had to reorient myself with new coffee shops, ATMs, and travel routes. Last weekend Siri took me through the suburbs and past the mall at Guildford Towne Square. You’d think by now Siri would know to pick a gayer route.

Then Siri and I had a "HAL from 2001: A Space Odyssey" moment. I’d punched in an East Vancouver address that turned out to be in one of those cul-de-sacked neighbourhoods abutting the rail line. Understandably, I missed a poorly marked intersection.

You know those judgmental messages you get when you don’t follow Siri’s directions? “Recalculating … Return to the route.”

After a couple more erroneous turns, however, Siri decided it was time to change tactics. Instead of the nagging complaints, Siri became patronizing: “Ok, in 90 feet turn right. Now in 30 feet turn right. Good boy….”

The rest of the day, Siri was all over me. But in a patient parental way. And I realized we’ve both learned to use the same soothing tone with our frustrated charges. 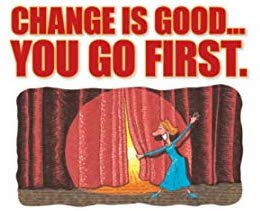