Growing Up with the Chorus 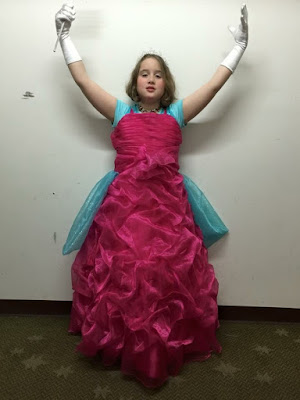 My daughter is a Drama Queen.

Last year Eleanor performed in the annual middle school play together with her best friend, who is the only child of doting academics. They are the kind of parents who enthusiastically support their daughter’s drama bug. During intermission, I asked the couple if they would have kept having children until they got one who liked theater.

Fortunately, I didn’t need to find out for myself. Eleanor has been performing since she was two. Not that I’m a stage father, but everything should be coming up Roger by now.

Unfortunately, my daughter is also a Drama Queen in the metaphorical sense. She’s a mistress of the sarcastic eye-roll and the distraught overreaction, and suffers from chronic hypochondria. Of course, she’s also the child who had emergency surgery when she was one month old, and who was helicoptered back to Seattle Children’s Hospital six years later.

Having a father who sings in a gay chorus didn’t make Eleanor a Drama Queen. But it probably helped. 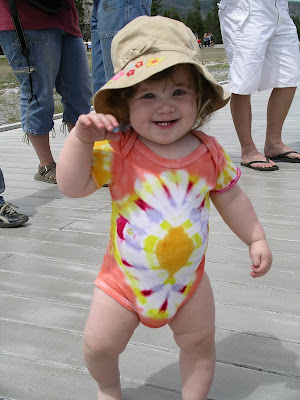 When Eleanor was a year old, she accompanied the Seattle Men’s Chorus and Seattle Women’s Chorus on our “Rocky Mountain” tour to Pocatello, Idaho; Salt Lake City, Utah; Billings, Montana; and Yellowstone, Wyoming. That’s her on the boardwalk at Old Faithful.

I was on the chorus board of directors fifteen years ago when we created the women’s chorus. Several years later, I asked SMC's longtime conductor Dennis Coleman what he found to be the biggest contrast between the two groups. I expected an insight about the essential differences between men and women, or the differing social dynamic when the queer/straight ratio is closer to 60/40 than 95/5. So I was surprised by Dennis’ answer: the biggest disparities between the cultures of each ensemble came from the fact that so many of the women are part of families with children at home.

Although several members of Vancouver Men’s Chorus have kids from youthful heterosexual marriages, I’m the only singer who is currently raising young children as a gay man. Everyone in VMC has welcomed my children as they’ve shown up for the occasional rehearsal. The “guncle” role comes naturally to many singers. Others are more like me when I meet a cute dog – I smile and say hi, but my allergies prevent any actual physical contact.

During my time with Seattle Men’s Chorus we reached a critical mass of fathers, even as we also welcomed a generation of bi, straight, and trans singers. Gay dads still make up a small minority of SMC. But we represent an important part of the community’s evolution. 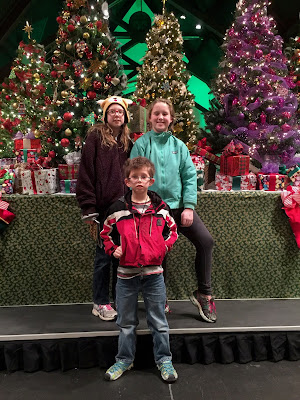 I’ve been dragging all three of my kids to chorus concerts for their entire lives. For many years, Rosalind refused to believe there were men beneath the lavish drag outfits.

Eleanor was always the one who looked forward to the concerts. She listened attentively and remembered the names of all my chorus friends. When she was seven or eight years old, Eleanor became entranced with one of the singers who was featured in the dance ensemble for several concerts in a row. Like Eleanor herself, he had an inviting face and an enthusiastic smile.

For my first Christmas concert with Vancouver Men’s Chorus, I bought tickets for my whole family. I watched from the stage as my father, Rosalind, and Oliver all fell asleep during the singing. Now I only get tickets for my mother and Eleanor. 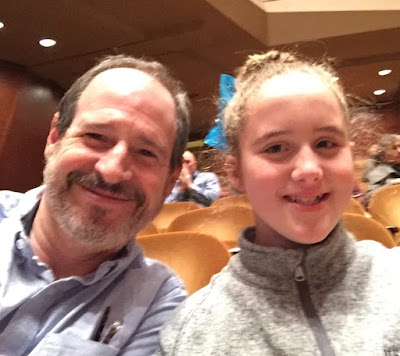 Parents love all their children equally, but you develop a distinctive relationship with each child. As I wrote last year in “Love is Not a Fallacy,” each of my kids can make an argument that one of the others is Papa’s “favorite.” Rosalind is the only one who will ride roller coasters with me, and she’ll probably be the one who takes care of me in my declining years. Oliver’s video game skills and direction sense will make him invaluable during the Zombie Apocalypse.

Eleanor is my go-to theatre date. This was particularly useful when we still lived in Seattle and I had a pair of season ticket subscriptions to the 5th Avenue, the Paramount, ACT, etc. Because of my congenital inability to ask anyone out on a real date, Eleanor got to accompany me to a lot of shows. 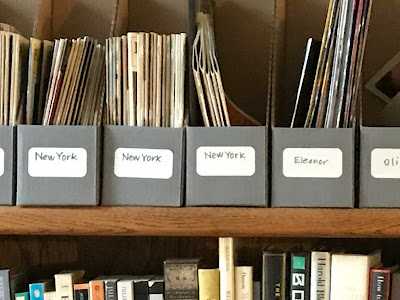 Above the bookcases in our living room you will find my collection of theater programs. Many, many theater programs. Mine fill fifteen magazine storage boxes. As I wrote last month in “Six Degrees of Kristen Chenoweth,” I’ve been doing this for a while.

Eleanor is only thirteen, but she’s almost filled her first box of programs: Peter and the Star Catcher, Mama Mia, Little Shop of Horrors, Hairspray, Oliver!.... Eleanor came with me when I braved the Seattle traffic to to see SMC: Everything Broadway. For her ninth birthday, we took the train to Vancouver to see Wicked at the Queen E. And when Glinda/local heroine Megan Hilty sang with SMC, Eleanor snuck backstage at Benaroya Hall to meet her. 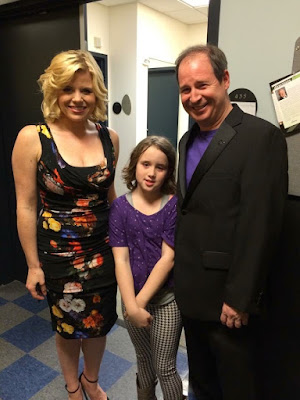 One of my daughter’s most prized possessions is a framed poster from Seattle Women’s Chorus’ sold-out Spring 2015 concert “Reel Women.” The poster is signed by Dennis Coleman and the women of the chorus. 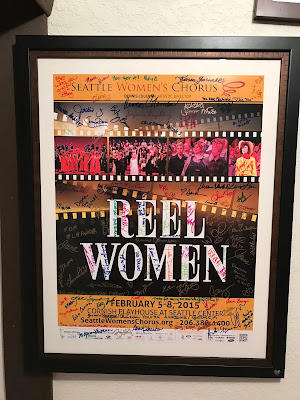 The theme of that year’s SWC concert was women in film. Their set of Disney songs included a skit where a mother pulled out a stack of VHS tapes to play favorite movies for her daughter, including Snow White and Sleeping Beauty.

Nine-year-old Eleanor successfully auditioned for the daughter role. Eleanor explained to her lesbian “mother” and the audience about the new generation of empowered Disney princesses. These days girls have better things to do than sit around and wait for Prince Charming. 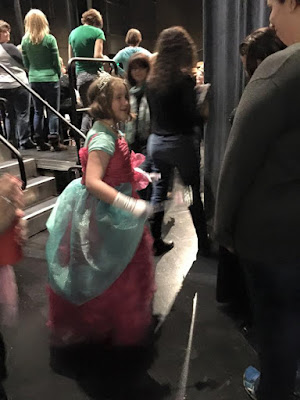 Now we live in a small town, I’m unemployed, and Eleanor is an annoying teenager. Compared to when I was a lawyer in Seattle, we don’t have nearly as many opportunities to go see shows together.

At least the kids are finally old enough to tend themselves on a Saturday evening. Indeed, as long as there’s food and wi-fi in the house, my children would prefer that I stay out of their hair.

As I recently wrote in “What Happens at Retreat,” for the last seven years Seattle Men’s Chorus has held its annual out-of-town retreat at the Bellingham Sheraton, just across the freeway from us. Last weekend I joined my longtime chorus buddies for Mexican food, UW football, and the notorious “No Talent Show.”

When I left to watch college football and then naked boys singing, this was the brief exchange with my daughter: 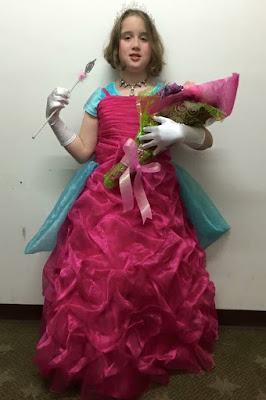 After the Huskies defeated Stanford, my SMC buddies and I left their wine-spattered hotel room to go mingle with the crowd in the ballroom. As the lights went down, I texted Eleanor a picture from this year’s No Talent Show, with this note:

“Your chorus crush Aaron is one of the drag MCs.” 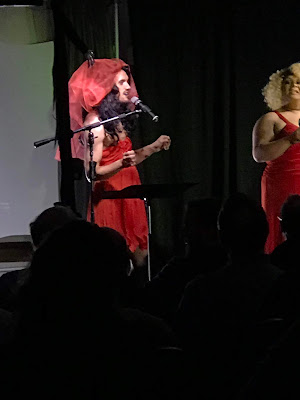 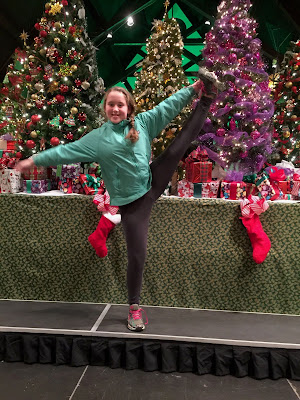