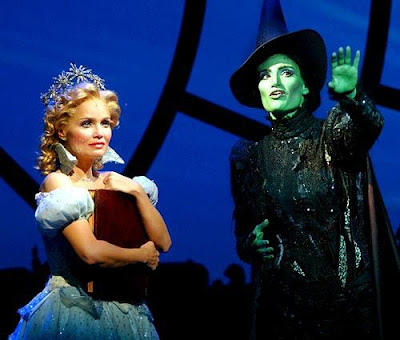 Singing in Vancouver Men’s Chorus gives me a plausible excuse for driving across the border at least once a week. The chorus rehearses on Wednesday evenings, which also happens to be Show Tune Night at XY.

XY is a generic gay night club in Vancouver’s Davie Village. It’s across the street from Pumpjack, the pub where members of the chorus socialize after rehearsal each week. Unlike Pumpjack, the acoustics at XY do not involve the kind of omnidirectional cacophony that promptly ejects me from the bar with an anxiety attack. Instead, inspired by New York’s legendary bar Marie's Crisis, XY’s proprietors offer a weekly sing-a-long piano bar.

The headliner is Kerry O’Donovan. Kerry is a local musician with an extraordinary gift for the unique demands of crowd-wrangling while playing and singing a shifting assortment of standards. Sean Allen, who plays a set each hour during Kerry’s break, is also a gifted performer. (Plus he’s cute and gay.) Show Tune Night is the real reason I go to Vancouver every week. 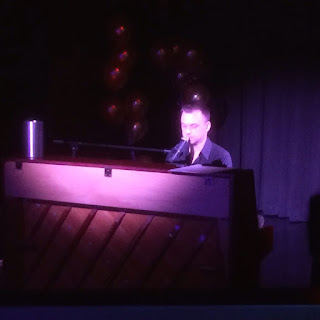 The audience for Show Tune Night in Canada is a mix of middle-aged fans like myself, of all genders and orientations; a bunch of overconfident drama types from the University of British Columbia and/or local theaters; several chorus divas who don’t even bother making an appearance at Pumpjack any more; and a few drunks who probably were expecting to watch hockey on TV. Everyone loves to sing along, even the drunks.

It’s fascinating to see who knows the songs from each era. My own tastes and knowledge of the Great American Songbook are pretty comprehensive. Last week the tipsy housewife next to me at the bar was impressed when I could identify every song, and then improvise harmonies for most of them. I explained to her I’ve always loved musicals, but my repertoire has a gap from 2005 to 2011 when young children interfered with theater trips. (I still haven’t seen Next to Normal or Spring Awakening.)

Listening and singing along with the mix of songs each Wednesday reminds me that memory is not linear. Instead, it’s a web of associations. 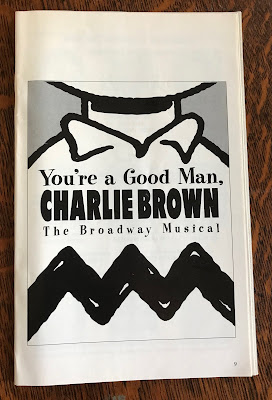 Last Wednesday, I heard Kerry play “My New Philosophy” for the first time. The song is from You’re a Good Man, Charlie Brown, but it wasn’t part of the original production. Instead, another composer (Andrew Lippa) wrote it for the sort-lived Broadway revival thirty years later. The song was sung by Charlie Brown's little sister Sally, who replaced the original Peppermint Patty character in the play. “My New Philosophy” became a powerful showcase for a pint-sized new star, Kristin Chenoweth. She won her first Tony in 1999 for playing Sally. Kristin has gone on to a successful career on television and in movies, but deep down she’s always been a Broadway Diva.

During Kerry’s smoking break, I told him I saw Kristin in the original production of Charlie Brown. It was in November 1998, before the show even made it to Broadway. Anthony Rapp played Charlie Brown, and B.D. Wong was Linus. (Both were already openly gay.) I was working as a gay rights lawyer at the ACLU in Chicago.

Skokie is a Chicago suburb with a large Jewish community, including many Holocaust survivors. Before moving to Illinois, my only association with “Skokie” was as the shorthand for a famous First Amendment episode. In 1978, the ACLU stood on principle and successfully fought for the rights of a group of Neo-Nazis to march through the streets of Skokie. At the ACLU of Illinois, I later worked with many individuals who were involved in the decision and its consequences for the community. My experiences as a civil rights advocate further reinforced my association of Skokie with “Skokie.”

Chicago has numerous suburbs. The only time I’ve ever been to Skokie myself was to see You're a Good Man, Charlie Brown. Before opening on Broadway, the show premiered at the Skokie Center for the Performing Arts. 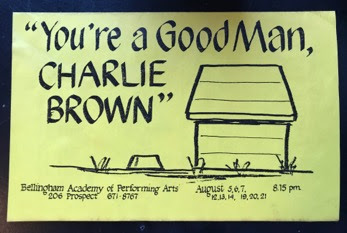 I can’t sing along to “My New Philosophy” – too many words – but I know all the other songs from the show by heart. And I can recite one of the speaking parts.

My parents moved to Bellingham a few months after I graduated from high school in Brigham City, Utah. However, the only time I ever lived in Bellingham before now was during the summer between my freshman and sophomore years of college. Unable to find a temporary McJob in town, I spent my summer vacation doing community theater instead.

Charlie Brown is the ultimate role for any codependent person. The world keeps offering us irresistible footballs to kick, then pulls them away. I can still recite the play’s opening monologue thirty-six years later.

Rather, I can recite what I remember as Charlie Brown’s opening monologue. I haven’t checked it against the script lately. 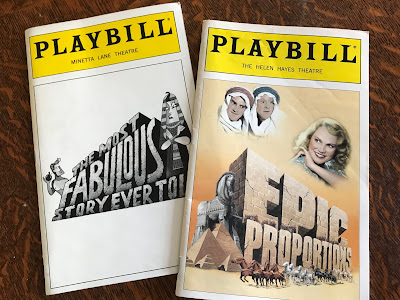 My next Kristin Chenoweth memory turns out to be fake.

For years, my brain filed this memory under “I saw Kristin in a non-singing Biblical role, in that funny play by Paul Rudnick.”

This week, as part of my fact check for this essay, I went through all my theater programs from past trips to New York. I blame lawyer harmony for my over-flowing collection of old Playbills. Despite being a bunch of unherdable cats, the national LGBT legal advocates have managed to achieve some extraordinary victories. We were always colleagues. In fact, when I was in Chicago, the ACLU, Lambda Legal, the National Center for Lesbian Rights, and GLAD brought together all their lawyers from around the country to share ideas and strategize twice a year. Usually these meetings were held in New York. For many years, I regularly gabbed with lawyers, saw great theater, and then drank bad beer while singing along at Marie’s Crisis. By definition, any “dream job” should include regular paid trips to New York.

In 1999, I saw Paul Rudnick’s witty off-Broadway play about the Old Testament, The Most Fabulous Story Ever Told. I remember Jesse Tyler Ferguson, who plays Mitchell in Modern Family, as a naked Adam in the Garden of Eden. (It was Adam and Steve.) And I remember Kristin Chenoweth was in the cast.

Yesterday I pulled out the program for The Most Fabulous Story Ever Told. Jesse Tyler Ferguson was indeed Adam. And the part of Jane was played by … Lea DeLaria.

Then I came upon the Playbill for Epic Proportions, which I also saw on an ACLU trip to New York in 1999. Kristin Chenoweth played the leading female part, “Louise Goldman.” The program says the play is set in “The Arizona desert,” in “The early 1930s.” I infer from the pictures and cast list that the play involves the making of a Biblical epic film.

I still have zero recollection of the play, including Kristin. Reading the Playbill and even peeking at the synopsis on Wikipedia didn’t refresh anything. 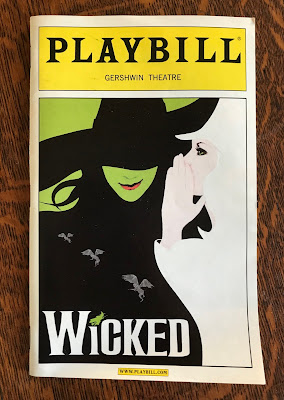 The next time I saw Kristin on Broadway she was singing again. It was her signature role: Glinda in Wicked, opposite Idina Menzel as Elphaba. I saw the original cast, in New York at the Gershwin Theater. They were amazing.

This was my last New York trip before Eleanor was born. I traveled with my Seattle chorus buddy Todd. Our final junket together added numerous other memories to New York’s rich associations: the sexy charm of Avenue Q (which robbed Wicked of the Tony for Best New Musical); waiting outside Lincoln Center after the Sweeny Todd revival so Todd could get Elaine Paige’s signature on his Playbill; and Hugh Jackman’s virtuoso performance as Peter Allen in Boy From Oz.

Actually, all I remember from Oz was the cast staying out on stage after the curtain call to make their annual charity pitch for Broadway Cares/Equity Fights AIDS. Hugh took off his shirt and auctioned it off to someone in the audience. Todd was jealous. 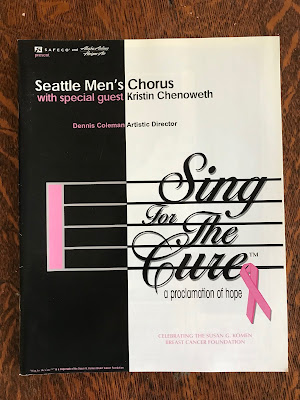 Before seeing Kristin on Broadway in Wicked, I sang with her at the Paramount Theater in Seattle in 2001. Well, me and the rest of Seattle Men’s Chorus.

Like many choruses that year, SMC presented a song cycle promoting breast cancer awareness, “Sing for the Cure.” We invited Kristin to sing the solo parts to this piece, which comprised the second act of the concert.

In the first act, Kristin did her own set as well as singing several songs together with the chorus. Kristin charmed both SMC and the audience throughout her visit. Her stunning “Glitter and Be Gay” was the best I’ve ever heard. But the highlight of the concert was a gorgeous arrangement of “I Could Have Danced All Night,” originally commissioned by the New York Gay Men’s Chorus. The men’s voices weaved together “Begin the Beguine” and other dance melodies as Kristin soared above us with the classic showstopper from My Fair Lady. It was one of the most memorable single performances I’ve ever been a part of. 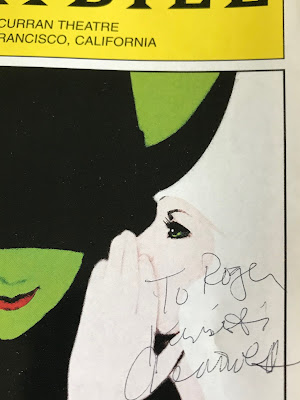 As I went through all my old Playbills, I came upon this oddity: the program from Wicked’s notorious pre-Broadway run in San Francisco in Fall 2004. Signed by Kristin Chenoweth. “To Roger.”

This was worse than Lea DeLaria. True, I’ve seen Wicked three other times, and the show itself blurs together (New York original cast; taking my mom for her 70th birthday in Seattle; and taking my daughter for her ninth birthday in Vancouver). But you’d think I’d remember a rare trip to San Francisco. Let alone getting Kristin’s autograph.

Plus I’m not really the autograph-seeking type. I’m too shy. In fact, the only time I’d ever stood outside a stage door waiting for the star to exit was after a matinee of Assassins in May 2004. My friend Todd was so bitter about missing the production he made me promise I’d get Neal Patrick Harris’ autograph for him.

Then I remembered. Later that year, Todd made a special trip to San Francisco just to investigate the Wicked rumors. He must have gotten Kristen to sign a program, then he gave it to me later. But that I don’t remember. 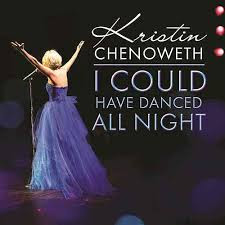