Recently I was taking to my friend Steve at the Official Vancouver Men’s Chorus Pre-Rehearsal Starbucks.

During rehearsal, Steve sits on the other side of an increasingly crowded chorus room. He's lost in the impenetrable wilderness of the B section (baritones and basses). As a result, I only ever exchange words with Steve when we’re far away from the chorus scrum, usually in a place where one or both us is holding coffee and/or beer.

On this occasion I greeted Steve with “Hey, we’re twins.”

Let me pause to note it would ordinarily make sense to think I’m referring to “twins” metaphorically, rather than in terms of physical appearance. Me being a writer and all. Particularly if you’re aware Steve and I have totally different builds and colouring. No one ever mistakenly thinks he’s a Jewish dweeb.

I did not immediately make the minivan connection. Steve was referring to the miraculous fact he’d managed to park his car in Starbucks’ microscopic parking lot, right next to my ancient Kia minivan.1

1Have I already ranted about how Canadians paint their parking spaces and – terrifyingly – also their roads with lanes that are at least a foot narrower than in the States? Vancouver is heaven and all, but even the nose of sheer perfection has a few freckles. Lucky for everyone I’m a master parallel parker. And the minivan is already thoroughly dented.

Our two cars are hardly twins. Steve's minivan is much younger and nicer than my minivan. Probably because his children are older and presumably nicer than my children.

I looked at Steve with a confused expression. This apparently made Steve think he should respond as if we were playing some charades-like game, and I was a young child: 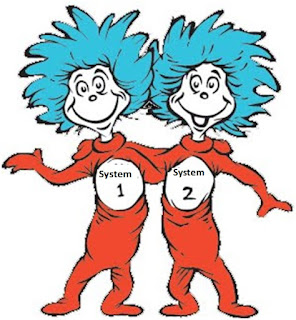 I remember the first time Steve and I had a real chat. He’d returned to the chorus after taking a concert off. We were both having a beer at Pumpjack on a Wednesday evening after rehearsal. [Ed. note: careful readers will note the same thing could truthfully be said about virtually every Wednesday in the subsequent months.]

While chatting at Pumpjack, Steve and I discovered we're both lawyers. We'd each spent years juggling gay choruses and intellectual property legal practices, but both our lives center around our kids. Eventually, both Steve and I walked away from soul-sucking Big Law, as well as from the Big City. When anyone in chorus expresses amazement I drive across the border each week, I point out Steve takes a ferry from Vancouver Island. Steve and I learned we had a lot in common during our relaxed 1-on-1 chat over beers at Pumpjack last year.

“Pumpjack” is not a place. Well, actually the bar Pumpjack indeed exists in Vancouver’s Davie Village gaybourhood, near the space where VMC rehearses. PJ used to be more of hole in the wall leather-ish bar. The owners doubled the space in recent years, and added a dance floor-ette. These days Pumpjack is where everyone who goes out goes when they go out. Instead of to its fading competitor Numbers, where I used to go when I first came out.

But I curmudgeonly digress again.

“Pumpjack” is an idea – an idea of community. After each week’s exhausting/exhilarating rehearsal ends, a critical mass of the chorus membership immediately carpools or walks down the street to the bar. Even our conductor Willi occasionally shows up. There are printed signs on the tables reserving VMC’s corner of Pumpjack. Wednesday night at 10 is a great time to get to know the men and boys, particularly the many folks from outside your own musical section or circle of buddies. Some of us  are late-night regulars at Pumpjack and then the piano bar just across the street (Even on school nights, if the right babysitter is available.) Without Pumpjack, most chorus members would have to wait until our annual rustic Retreat before enjoying a meaningful opportunity to forge bonds with each other.

Similarly, in Windy City Gay Chorus, we all went out to Big Chicks together after rehearsal every Wednesday night. (Remind me to tell the story of the only time in my life my car was towed.)

However, in the much larger and more corporate Seattle Men’s Chorus, chorus members stopped going out together after rehearsal en masse long ago. 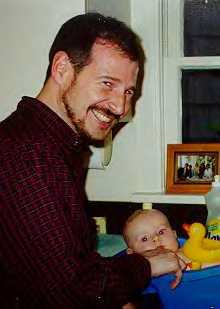 Steve has worn the same beard since I met him. It looks good on him. Like my own perennial facial hair visitation, Steve's beard gets increasingly greyer. We blame the children. For everything.

Anyway, I’d only just recognized the Beard Twin connection with Steve because my own beard is relatively new. Or at least newly returned. Like a rare orchid, my beard blooms once a year.

As I recently wrote in “Keep The Beard?,” every Christmas I stop shaving. Most years I'd be clean-shaven again by the end of February. In 2018, however, the militant Pro-Beard Front launched a particularly effective campaign. (Prior to growing the beard, no one from chorus had ever rubbed his fingers on my chin at Pumpjack, or anywhere else for that matter.) The Pro-Beard Front's ruthless tactics have outweighed the annoying itchiness. For now.

There’s one final reason I introduce Steve as an example of the “Doppeler Effect.” It's another of the many implausibly logomaniacal threads connecting the people in my life.

At the end of our long post-rehearsal conversation over beers at Pumpjack, I finally figured out Steve was that guy whose name I’d forgotten – the guy I was supposed to look up when I first joined the chorus the year before. Because, coincidentally, many years ago, VMC Minivan Dad #2 dated my best friend from Seattle Men’s Chorus.