The Doppeler Effect: I am Rob Lowe 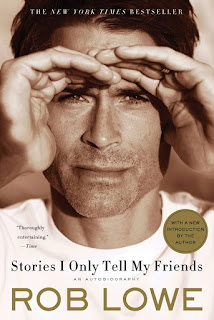 I’ve always been fascinated by the many variations on “doppelgangers” you encounter in your life:  childhood friends marching down the road you were afraid to take, repeated versions of the same patently unsuitable admirer, people you meet just once at camp or a conference who nevertheless manage to change your life, the nemesis who got the job you wanted, etc. These “Doppeler Effect” essays describe doppelers whose lives parallel particular threads of my own story.

When I got my new Bellingham Public Library card this year, the first book I checked out was Rob Lowe’s memoir, Stories I Only Tell My Friends. I opened it with few expectations – a friend recommended the book, Lowe’s Brat Pack movies were a fixture of my youth, I knew from grocery line tabloid headlines he had become a sober family man, and I liked his self-aware comic persona in Parks & Recreation. I hadn’t followed his career closely, however. For example, I never watched West Wing, even though it’s my parents’ favorite show since MASH. (I’m approaching my lifetime binge-watching limit, and in any event I fear the contrast between the idealized West Wing and recent non-black presidents would just upset me.)

So I was surprised by how much I enjoyed Lowe’s memoir. He’s a decent writer, and has interesting material to work with. I particularly liked the chapter where he briefly dates Princess Stephanie of Monaco because each other’s Teen Beat poster hung on their bedroom walls as teenagers. He inhabits an alien and glamorous world. Nevertheless, I was startled to read how our very different lives have followed eerily similar arcs. I am Rob Lowe. 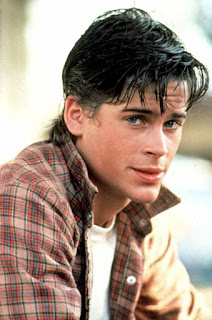 First, Rob Lowe and I have the same initials.  (I just noticed that.)

Second, we are the same age, born within a couple of months of each other. Actually I am the same age as most of the male movie stars who have dominated the box office and People Magazine’s “Sexiest Man Alive” list for three decades:  Tom Cruise, Brad Pitt, Johnny Depp, Keanu Reeves, Charlie Sheen, John Stamos, etc.  I used to think this phenomenon was yet another pathological Baby Boomer legacy. I hypothesized the Me Generation couldn’t stand to look at anyone too much younger than themselves. Lowe’s book disillusioned me by revealing the prosaic explanation: the summer blockbuster era arrived at the end of the 1970s, when we were all in our hormonal prime. Previously, movies were about the adults, and kids had supporting parts. Suddenly Hollywood started making moves with youthful stars, and for youthful audiences. Lowe, Cruise, and the rest of the cast of John Hughes movies came along just in time. They began their careers together in The Outsiders, and never let go of the Hollywood/People throne.

Third, we both have aged gracefully and with a sense of humor. Unlike Lowe, I was not a teen idol. In fact, I was so clueless I entirely missed out on a social life for most of my teens and twenties. I had no idea there was a market for skinny gay nerds when I was one. Fortunately, the whole middle-aged gay dad thing suits me. Now that “dad bods” are a thing.

Fourth, we have both faced codependency. Lowe doesn’t use the word in his book. But he describes very similar habits of thinking and behavior – questioning yourself, coping with crowds as an introvert, struggling to maintain healthy boundaries in relationships, learning how to make important decisions, and relying on crutches that eventually cripple us. Lowe hit rock bottom at age 25. He got clean and sober, married a great partner, raised a couple of sons, eased back on career stress, and learned to find balance. I waited another 25 years to begin my own recovery. But I’m on track.

For me the most interesting parallel was in our origin stories. He grew up in Dayton, Ohio, and had an idyllic childhood, including a passion for acting in community theater. When he was 12, his mother suddenly moved to Malibu, California.  Lowe went to high school as an outsider and overachieving misfit.  Then he hit the world at 17.

Vancouver is not Dayton, Brigham City is not Malibu, and a prodigious academic and legal career is hardly the same as appearing in The Outsiders and on the cover of Teen Beat. But the timing was the same. Lowe muses about how each of those milestones from our youth affected his relationships, career, and ultimate happiness. 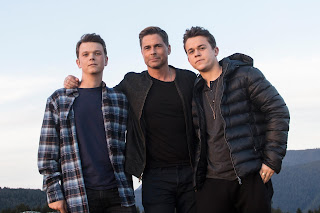 Finally, more than anything else, Rob Lowe and I are dads.
My nine-year-old son Oliver is Papa’s Little Boy. Unlike his older sisters, he runs to hug me, and demands some cuddle time every day. Every night when I tuck him in, Oliver insists I climb in bed with him for a while. Often I fall asleep there myself.  (The girls don’t bother waking me until long past their bedtime.)

Rob Lowe has two photogenic college-aged sons. In my favorite story from his books, even better than meeting Monaco royalty, Lowe writes how his older son always insisted that his father tuck him in bed with dad’s special burrito-blanket fold – until the inevitable day when his son said he didn’t need to be in a burrito to sleep any more. I’m bracing myself for that day with Oliver.

I take comfort from Lowe’s epilogue. When he and his wife dropped their son off for his freshman year at Duke, they helped him set up his dorm room. But that first night their son decided he’d rather sleep at their hotel. And let his dad tuck him in bed.