The Doppeler Effect: Rosencrantz and Guildenstern are Gay Mormons 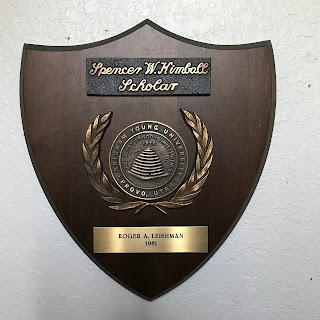 I’ve always been fascinated by the many variations on “doppelgangers” you encounter in your life:  childhood friends marching down the road you were afraid to take, repeated versions of the same patently unsuitable admirer, people you meet just once at camp or a conference who nevertheless manage to change your life, the nemesis who got the job you wanted, etc. Currently I’m working on a book chapter contrasting the two guys I’ve hung out with most this year, Super Fuzzy Thing and Trailer Park Single Dad.

Recently on Facebook, a friend posted a cat-free inspirational poster urging everyone to “Be the hero of your story.” From the context of the post, “hero” was apparently intended as the preferred alternative to “victim.” Frankly there are days when I feel pretty victimized. Usually, however, I manage to swiftly move on to “martyr.” I can only dream of being a hero someday, let alone “the hero.” Instead, I worry I’m the only one who hasn’t figured out I'm either an “anti-hero” or a “villain.”  (Hopefully at least "the villain.")

Mostly I’m aiming for “protagonist.” I fear I've wandered into a production of something resembling Tom Stoppard's Rosencrantz and Guildenstern are Dead (which asks what Hamlet would look like from the point of view of a couple of minor players). Maybe the reason my life doesn't make sense sometimes is I'm merely a clumsy plot device in someone else's much more interesting narrative – such as the guy who stood me up for a date because someone at work tried to cut off his head with a machete.

When I was in theater years ago, directors always cast me in character parts, like the juvenile lead’s dorky best friend. Or I was in the chorus, usually placed in the back row so the audience wouldn’t see my graceless dancing. Don’t get me wrong, I admire great character actors like Sir Ian McKellan and Dame Judi Dench, with their Oscar nominations for five minutes of screen time. But this is supposed to be my story. I don’t want to sit around reading in the green room for an hour so I can be there for the curtain call, too proud to just go home and go to bed like a child actor on a school night.

Still, I’m a trouper.  It’s all about serving the Story.

If Steven Spielberg, William Shakespeare, or Rodgers & Hammerstein were telling the story of one very specific generation of gay Mormons, my own tale would provide the tragicomic B Plot to accompany my friend John Wrathall’s heroic A Plot. One of us will end up happily married, and the other will probably have to settle for a meaningful death (in order to serve the narrative while providing our audience with the appropriate measure of pathos and catharsis). No one knows who will end up with each fate. Yet.  [Ed. note: actually, back in those days any gay character died.] 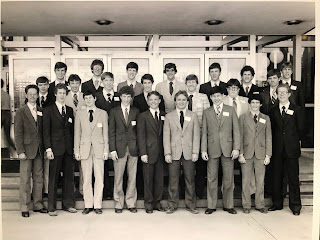 I first met John Wrathall when we both were finalists for BYU’s prestigious Spencer W. Kimball Scholarship. In our era, Mormon youth from around the world applied for the university’s top honor, named each year for the current president of the church. BYU flew the finalists to Utah for an intense long weekend of socializing and competition before they selected twelve winners and two alternates.  (The girl finalists had their turn the following week – God forbid the sexes should intermingle.)  [Ed. note: what about doppelers Michael Pulsipher, M.D., and Jenny Hale Pulsipher, Ph.D., also 1981 Kimball Scholars?]

Somehow God chose both John and me as Kimball Scholars. We lived in the same Honors dorm our freshman year. Here is a Halloween picture of us with our floormates. John is the one in Nazi regalia: 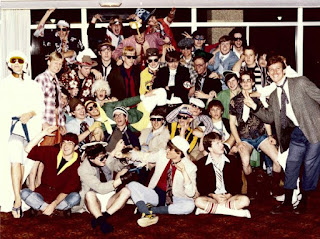 Hey, it was the 80s. [Ed. note: is that the same green bathrobe still hanging upstairs?]

After returning from our missions to Korea and Switzerland, John and I lived together with several other pre- and post-mission friends in a crowded off-campus apartment. John left BYU abruptly in the summer of 1986. During the following school year, I graduated with a B.A. in English as BYU’s valedictorian, co-founded an independent student newspaper, finished my coursework for a masters in linguistics, taught freshman English, finally had my first kiss (with an older woman), competed on BYU's college bowl team, acted in numerous plays in Salt Lake at Hale Center Theatre, had a nervous breakdown over the convergence of religion/sex/depression, and eventually escaped to Yale Law School.

Here’s a quick John Gustav-Wrathall primer covering most of the thirty-one years since the two of us lived together as undergrad roommates without realizing we’re both gay:


John endured one last bout of ecclesiastical abuse by our local bishop, spent the summer depressed in Europe, almost killed himself, came out as gay, became a Protestant, was excommunicated by the Mormons, finished his B.A. and a PhD in history at the University of Minnesota, never quite fit into an academic career, met Prince Charming and got married 25 years ago, and together successfully raised a gay teen who landed in foster care after being kicked out by his fundamentalist parents.

Sounds like a great B Plot to accompany my story, doesn’t it? Impressive, but surely not enough to steal top billing from “funny longtime gay rights lawyer/sorta-Canadian writer/university general counsel/fired when his incompetent employers triggered Mormon PTSD/David versus Goliath litigant/unemployed disabled single father with three photogenic children”? Read on:


Twelve years ago, John heard God tell him both to return to the Mormons AND to stay with his husband. John has already blogged extensively about his experiences, and finished another book. Despite remaining excommunicated, he attends Mormon church services each week, and has devoted an immense amount of time and energy to the Mormon LGBT advocacy group Affirmation, including serving as its president. Last month John finally quit his longsuffering day job as a legal assistant so he could be hired as Affirmation’s first fulltime Executive Director. PLUS John survived a serious bicycle injury four years ago, and his husband Goran is waiting for a new kidney. Unfortunately (fortunately?) brain surgery did not mute the voices, or inspire God to tell John he should take some time off from heroics and just chill with his family.

Frankly even I can’t compete with that. 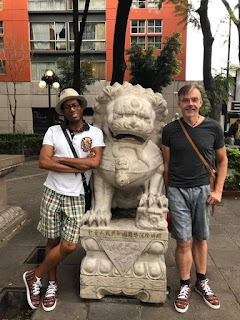 
Here are links to more of my “Doppeler Effect” essays, describing other individuals whose lives have paralleled and/or crossed particular threads of my own story: