I come from a long line of avoiders. We Leishmans avoid conflict, and unpleasant tasks, and talking about our feelings. Actually, we avoid talking about anything messy. Members of my family prefer to communicate via a combination of subtext and telepathy. This approach works surprisingly well, perhaps because our thinking follows similar grooves as a consequence of both nature and nurture. Nevertheless, the system often breaks down – particularly when one of our imaginary communications involves the time or location of family gatherings.

The years between ages 26 and 29 involved a lot of pretty gay things. I went on a bunch of first dates with guys, a few second dates, and zero third dates. I had bad gay sex. I made good gay friends. I came out at work. I got involved in local LGBT politics, and became the pro bono lead lawyer for “Hands of Washington!,” the grassroots political organization that formed in the early 90s to oppose a flurry of anti-gay ballot initiatives.

After a couple of years in my lonely yuppy apartment with the Space Needle view, I rented a newly restored Victorian house together with a couple of friends. The house was on Capitol Hill in the heart of the gay neighborhood. One of my housemates was a corporate lawyer from Seattle’s other big law firm. He arrived from New Orleans with a truckload of antebellum antique furniture and a friendly Labrador retriever. Our other housemate was a fabulous interior decorator. Our Pride party was legendary.

When my gay lawyer housemate moved across the country after meeting his gay doctor husband at the Timberline’s Sunday tea dance, I found a vintage two bedroom apartment in a quieter corner of Capitol Hill. My new roommate Geoff was a gay ex-Mormon from BYU. I met Geoff when he was militantly marching in the Seattle Pride Parade, in full missionary regalia as he held hands with another ex-elder. Geoff dragged me to events for the local chapter of Affirmation, the organization for LGBT Mormons and former Mormons.

That summer I made the mistake of bringing Geoff to a party on a sailboat owned by a gay lawyer friend, where Geoff met yet another gay lawyer. (They’re still together twenty-eight years later.) When Geoff moved in with Mike after a year, I wanted to keep our apartment but couldn’t find a new roommate. I’d recently met my first boyfriend, Evil Josh, who happened to be looking for a new apartment. (The byname “Evil Josh” is not an insult, merely a vestige of lunchtimes with my posse at the law firm. We always referred to each other’s significant others as “Evil Margaret,” “Evil Josh,” “Evil Dave,” etc.) Even though Evil Josh and I had only been dating for a few months, we decided to move in together.

This presented a problem the next time my parents visited Seattle. They liked Geoff, and they’d already met Evil Josh. But we still hadn’t had “the talk.”

Evil Josh was away that weekend with friends. I gave my parents a tour of our reconfigured apartment, with my bed and chest of drawers now tastefully arranged in Geoff’s former bedroom. When we reached the second bedroom, there was a desk where my bed used to be.

My father, who is the member of the family most likely to avoid avoiding, asked “Where does Josh sleep?” I swear I responded “With me, of course.” But my mother interrupted to exclaim “Look, the futon folds out!”

One year later, I accepted a job with the ACLU of Illinois as Director of its LGBT Rights/AIDS & Civil Liberties Project. That weekend I drove the ninety miles from Seattle to Bellingham, where I confessed to my parents that I was gay, and that I was moving to Chicago with my boyfriend to be an LGBT rights lawyer for the American Civil Liberties Union.

The ACLU part was the hardest piece of news for my staunchly Republican father. We agreed on a cover story to tell my parents’ friends:  I’d been disbarred and gone away to prison. 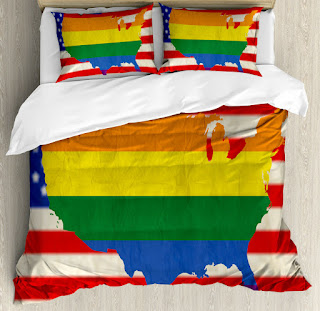 Actually, my parents have been endlessly supportive, both before and after “the talk.” My father later told me he’d known I was gay ever since I was a child. But my mother was taken by surprise. Her brain wasn’t prepared to make the obvious connections, just like my own.

The most interesting revelation came years later. My parents disclosed that they’d never discussed my sexual orientation with each other before “the talk” – even after they knew I’d left the Mormon church, that most of my friends were gay, that I was distracting myself from my law firm day job with gay rights cases, and that Evil Josh didn’t sleep on the futon. 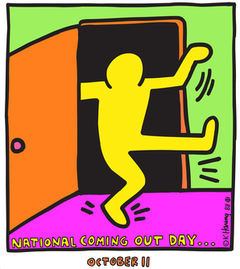