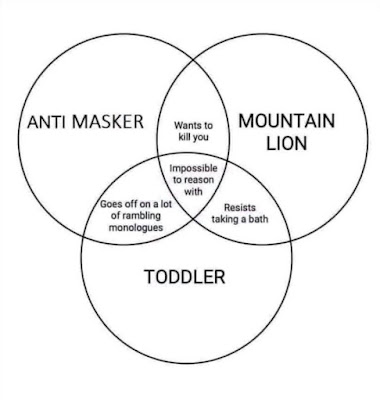 Who predicted I would turn out to be an anti-masker? 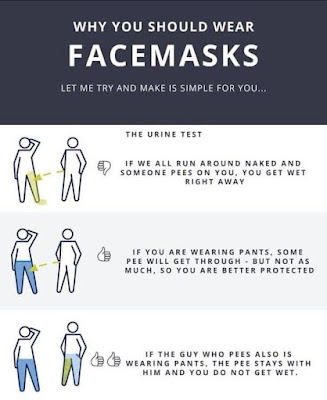 I’ve always been terrible at therapy. But I believe in it, so I keep trying.

In hindsight, I recognize my various therapists were handicapped by focusing on anxiety or depression, rather than addressing the impact of trauma on my psyche. We should have treated the cause, not just the symptoms. The wrong diagnosis can easily lead a patient or practitioner astray about the nature of the beast, like the blind men in the Buddhist parable who leap to erroneous generalizations about elephants after each feels only the trunk, tusk, foot, or hide. Nevertheless, I’ve come out of each round of therapy with some useful puzzle pieces.

Ten years ago, it was time to talk to another Seattle therapist about work and family anxiety. He suggested I read Jon Kabat-Zinn’s Full Catastrophe Living, and gave me a copy of Kabat-Zinn’s classic mediation tapes from the Stress Reduction Clinic at the University of Massachusetts Medical School.

I was mindful before it became a fad. 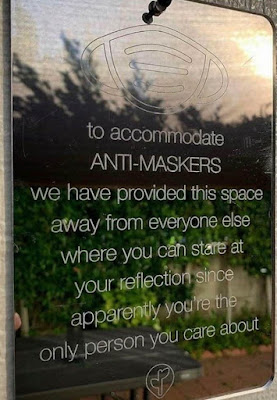 Actually, I used to be terrible at meditation, too. The problem was breathing.

Mindfulness meditation is rooted in various ancient practices. In each tradition, the focus is on focus – pointing your mind toward a specific object or mantra, or even toward unfocused diffusion. Almost anything can become a helpful tool for observing how your mind works, especially the constant interplay between senses, thoughts, and feelings. You quickly realize how easily your mind is distracted by all three.

These days anyone can choose among many mindful guides, from Jon Kabat-Zinn’s pioneering work to Andy Puddicombe’s excellent Headspace iPhone app, which is what I now rely on. Nevertheless, all these guys tell you to start your meditation practice by using your own breathing as the primary focus.

I’ve heard various explanations for meditation’s emphasis on breathing. My theory is that it’s a question of efficiency. There’s no need to invest in fancy equipment or secret passwords when you embrace meditation – your own breathing will always be there, ready to receive your attention again as soon as you realize you’ve become distracted. Which inevitably happens.

However, I’ve discovered two problems with mindfulness’ near-universal focus on breathing. My first quibble comes from the fact that human breathing can be either voluntary or involuntary. If you don’t consciously take a breath to speak, sing, sigh, etc., your brain’s unconscious limbic system will eventually take over breathing for you, without your awareness.

So when Jon or Andy’s soothing mediation guide voice tells me “Don’t attempt to control your breathing,” I freeze. It’s like when you’re driving with the car set on cruise control, then something suddenly makes you tap the brake. A real life application of the Heisenberg uncertainty principle: if you tell me to pay attention to my breathing, I won’t be able to “just breathe.” 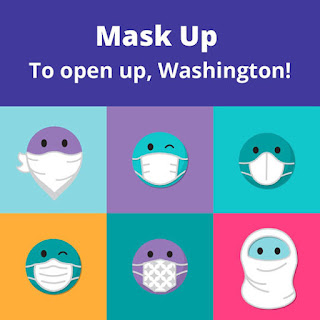 Fortunately, I’ve learned to duck the mindful “Just breathe” command by directing my attention somewhere else as I meditate. The rhythm of breathing becomes one more thing I can pay attention to as I learn through experience and observation how my mind works.

Unfortunately, my second problem with mindful meditation is the fact that I’ve gotten even worse at breathing over the last few years. [Trigger warning: this next bit is gross.] For decades, interacting cycles of stress and seasonal allergies gave me chronic sinus infections. Then PTSD amplified my formerly mild case of trichotillomania, i.e. uncontrollable hair pulling and skin picking. In addition to rubbing my forehead till it throbs, I wake each morning with bloodstains on my sheets. It turns out compulsive nose-picking is another delayed trauma symptom. All day long. Our dog Buster has developed a disgusting taste for bloody Kleenex.

I inherited my nose from my father, or at least the inside of my nose. We snore the same snores, and swear by the same Canadian over-the-counter allergy medicine. Years ago my father had surgery on his sinuses in an effort to improve air flow. It didn’t seem to make any difference. But his experience inspired me to ask my insightful Bellingham physician if there was anything I could do to improve my breathing. Dr. Heuristic sent me to an ear, nose, and throat specialist.

The ENT peered deep up my sinuses, and said everything was structurally sound. No excuse for surgery. Then the doctor recoiled at his magnified view of my flayed nostrils, and told me to stop picking my nose. (As someone living with PTSD, including compulsive body-focused behavior symptoms, I've grown accustomed to hearing variations on “Snap out of it!”) Fortunately, the ENT was able to suggest another inexpensive over-the-counter hack. Have you seen those little bottles of nasal saline spray? The “Ayr”-branded spray contains silicone; it also comes in silicone gel form. Ayr soothes my wounds and slowly shrinks my scabs.

Nevertheless, even with Ayr my nostrils are perpetually raw – a nosebleed waiting to happen. As a result, every mindful meditation tape or podcast is filled with potential triggers. For example, at one point during his thirty-minute body scan, you hear Jon Kabat-Zinn’s soothing voice say “As long as you’re breathing, there’s more right with you than wrong with you.”

Sounds Pollyanna-ish to me. On good days my nose feels like a war zone – an obstructed World War II trench after yet another bombing. On bad days I look like W.C. Fields. 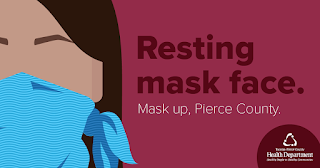 Have you heard of “waterboarding,” the Bush-era torture practice that simulates the experience of drowning? That’s what wearing a mask feels like for me. I start out fine, with my brain getting enough oxygen despite a further decrease in air flow. But after a few minutes I catch myself gasping.

Wearing a mask on the trail with Bear would take all the zen out of our walks. Fortunately, masks are unnecessary in the wide open outdoors. And I have no problem wearing my mask for short periods of time, long enough to order coffee or pick up the mail. Like a deep-sea diver, I’ve even learned to endure a mask long enough to finish grocery shopping for a family of four. But if you thought I was a fast shopper before, you haven’t seen me sprinting through Trader Joe’s lately. 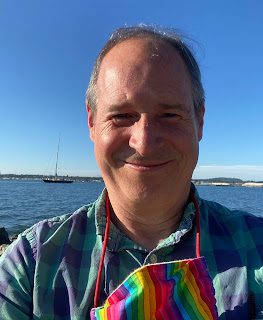 I suppose I could hand out cards saying I have a medical condition that interferes with wearing a mask. Or I just could start wearing a MAGA cap in public.

This summer my non-Zoom social interactions have been limited to dog people. While the kids were visiting my ex in the Midwest, the dogs and I took advantage of Bellingham’s marvelous network of trails, parks, and off-leash areas. Recently Bear and Buster were frolicking in the off-leash meadow behind another Bellingham amenity, the World’s Loveliest Sewage Treatment Plant. One of the crochety old mutt owners apparently saw me as a kindred spirit. He started kvetching about the government’s jack-booted dress code, and how he feels like people in Bellingham judge him because he doesn’t have a mask.

I told my Trump-voting comrade that I have a medical problem with masks, so I usually only wear them indoors. But his comment made me realize that I get a more positive reaction from strangers on the trail when I walk with a mask around my neck. Since then I’ve made a point of grabbing a mask on my way out the door with the dogs, even if I’m not expecting any undistanced socialization.

At the beginning of quarantine, when masks and toilet paper were in short supply, my mother sewed us a bunch of cloth masks. Sometimes I choose the mask with red Canadian maple leaves, or the small faded black one I can almost breathe through. But usually I wear my rainbow mask – never miss an opportunity to come out.

It’s also a great conversation starter with the dog crowd. When someone admires my mask, I tell them my mother also made the huge rainbow flag PFLAG carries in the Pride Parade. 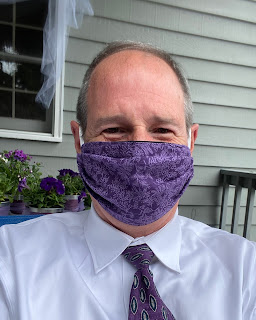 Now that I’m an old man I can wear purple. But only on special occasions.

Ordinarily, good Mormons get married in one of the church’s specialized temples as part of the sect’s most sacred rites. Only “worthy” church members may enter the temple and attend the actual wedding ceremony – everyone else just shows up for the reception. My last Mormon wedding was in 1987, in the historic Salt Lake Temple, where I was a witness as my BYU roommate Bill married Melissa.

In 2020, the coronavirus pandemic changes everything, even weddings. Mormon temples are closed. So last month I attended a Mormon wedding in my parents’ backyard. It was lovely.

My eldest niece, who is the best elementary school teacher in Provo, Utah, was the first member of my kids’ generation of Leishmans to tie the knot. She married my eldest nephew’s BYU roommate. The groom’s parents, siblings, nieces, and nephews all drove up from Utah. The bride’s family drove up from Utah and from British Columbia, where my brother lives. Well, most of the bride’s family drove to the wedding. My Canadian sister-in-law, the only member of her family without dual citizenship, was turned away at the border. Apparently the overgrown Boy Scouts who guard the US side of the Peace Arch crossing don’t think a daughter’s wedding is “essential.” Fortunately, my sister-in-law was able to fly from Vancouver to Seattle instead. Her side of the family watched the ceremony on Zoom.

It was a very 2020 wedding – hastily rescheduled and rearranged; filled with logistical nightmares; socially distanced; and in the most inconceivable of locations. Still, love brought everything together.

The bride and groom were radiant. My parents’ yard and house looked perfect. My brother with spine cancer walked his daughter down the aisle, holding one of his canes as he leaned on the bride. A family friend made a beautiful cake. Another friend sewed masks for everyone in various shades of purple. I picked a mask that matched the purplest power tie in my ex-lawyer closet.

As the wedding date approached, everyone worried about everything. Except for the serene bride. Eventually we all had to follow her lead, and let go. That’s what you do in 2020. The New York Times recently observed in one of its living-with-covid features that the process of breathing itself can be soothing. Plagues and disasters surround us all. The future is uncertain. Yet now that I’m with my family once again, I’m as happy as I’ve ever been in my life. 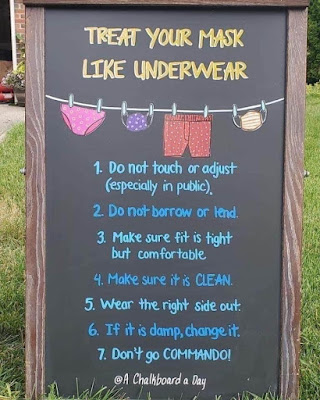