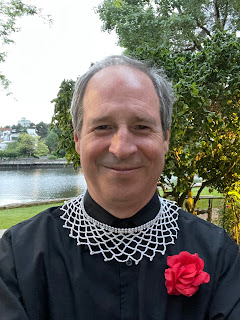 Yesterday I received the nicest compliment ever.

It was closing night of a successful series of Vancouver Men’s Chorus concerts entitled "R-E-S-P-E-C-T: Celebrating Women's Music." Afterwards a woman came up to me in the parking lot on Granville Island to say how much she enjoyed watching my face during the performance. She said, “Years ago in high school, my choir conductor kept telling us to smile. Now I know what he meant.”

I said thank you, and told her they were a great audience. Then we discussed how the first tenor next to me had the second-brightest smile in the chorus – so maybe our conductor Willi should consider spreading the joy and separate us a little. (Not coincidentally, when an elderly couple came up to compliment my smile after an earlier performance, they said the nearby “Asian guy” and I seemed to be enjoying ourselves more than anyone else on stage.)

The reason our gushing patrons noticed my smile was because despite many challenges these days I’m happy, the kids are alright, and I’m enjoying the best mental health of my life. It shows.

More importantly, they were able to observe my freakishly expressive face because I stood in the front row. Previously the combination of anxiety issues and terrible dancing would have protected me from being placed in such a vulnerable and exposed position. In fact, after twenty-five years singing in gay choruses, Willi was the first person to put me in the front row of anything. 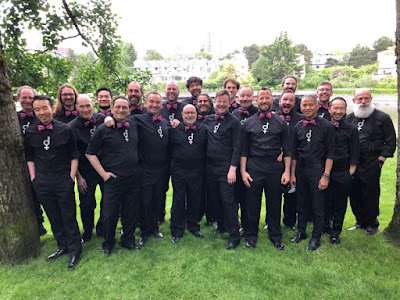 I joined Vancouver Men’s Chorus in January 2016, just two months after the shock of being diagnosed with Post-Traumatic Stress Disorder. Abusive workplace dynamics at my new job in Bellingham had triggered a host of strange new anxiety symptoms. A few months later, they fired me based on my disability. This further exacerbated my injuries, and exposed long-avoided psychological fault lines. Rock bottom occurred during my first year in VMC.

I spent the last six years slowly rebuilding my mental health, while simultaneously dealing with distractions like raising three kids during a pandemic and suing my former employer. At this point I accept that many of my tics and twitches will never go away. Fortunately, I’ve learned to recognize triggering situations, identify reasonable accommodations, and mitigate the impact of trauma.

Meanwhile, I’ve finally begun making progress on the social aspects of my disability. Before getting the correct trauma-based diagnosis, I used to think I was just a typical introvert who struggled with social anxiety. Now I recognize that even without the effect of trauma I would still be neurodiverse. I could have grown up to be the gay English Major version of Sheldon from Big Bang Theory. Trauma merely bumped me a few notches further along the autism spectrum. As a result I’ve lost much of my already dubious ability to read ordinary social cues. Paradoxically, despite having an exceptionally expressive face myself, other people's emotions remain a mystery. I can’t tell if someone is hitting on me, or challenging me to a duel. So I mostly stay quiet.

As I faced various challenges over the last few years, Vancouver Men’s Chorus provided my greatest lifeline other than my family and my writing. In particular, VMC allowed me slowly crawl out of my shell in the safest possible corner of humanity: a gay Canadian choir.

Ironically, however, my disability disproportionately affects my relationships with other gay men. When I began singing with VMC, I was practically catatonic – barely able to engage in any social interactions, and completely unable to speak to strangers. I was also essentially face blind. Eventually my brain started adapting. But it still played weird tricks, like remembering guys only as cartoon characters. Then covid closed the border and silenced choirs for a couple of years.

Fortunately, by the time the border reopened and we began rehearsing again last fall, I was thinking much more clearly. I could finally tell guys apart. But I still have problems with basic things like eye contact, and knowing when to start or stop talking. So I seldom initiate conversations with anyone other than the handful of other tenors I’ve known for years. Socially I’m like a vampire – someone else has to be the one to open the door and invite me in. 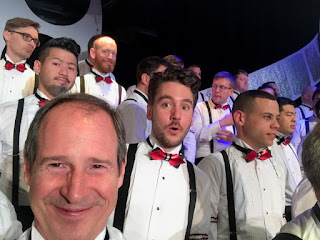 One way to measure mental health progress is to compare the story of my smile. Five years ago, I published “If You Just Smile” after my very first VMC concert. The opening anecdote was eerily similar to this year’s essay:

Vancouver Men’s Chorus recently finished a successful run of concerts on Granville Island. After one of our final performances, a middle-aged straight couple came up to me in the lobby. They both loved our show, and gushed about the marvelous singing and entertaining dancing. They sought me out afterwards to say “You had the best smile! Only a few of you up there looked like you were having fun the whole time, but you definitely did!”

I get that a lot. I have a mime-ishly expressive face, often without realizing it. (Sometimes your eyes just roll.) After forty years of performing, I’ve embraced numerous directors’ and conductors’ admonition to let the audience see you are enjoying yourself. But I smile almost all the time offstage as well. Everyone says my smile is my best feature. Seriously – eHarmony has statistical data proving this. …

If that straight couple had come to opening night of the recent Vancouver Men’s Chorus concert, I know they would have loved the fun but less polished show. They might have not noticed me fiddling with fuzzy green things offstage to distract myself from pulling my hair out. But unless they are both legally blind, they would have seen the smile of an anxious second tenor overwhelmed by the scrum of gay men backstage, and remembering such a low percentage of his choralography he should not be placed in the front row. Ever again. Hint, hint.

“If You Just Smile” told the story the story of how my personal traumas began. When I was a teenager, my family moved from Vancouver to a repressive Mormon small town in Utah. I got the nickname “Smiley” from my bullying classmates. I began compulsively clenching my teeth and smiling because I knew if I started to cry instead I would lose it all. I spent the next thirty years blinding people with that same smile, regardless of whether it was real.

At my first VMC concerts my smile was just as bright before and after I learned the choreography. But Willi sensed my discomfort, and never put me in the front row again until this year.

As I wrote last week in “True Stories,” an evening of gay men singing songs by and about women requires a little extra context. Willi therefore asked for volunteers to introduce several of the numbers with personal stories about their connection to the songs. I was one of three singers who introduced the song “Chosen Families.” It wasn’t a diva solo or flashy dance number. But it came at the emotional climax of the concert.

Willi is an expert at guiding audiences on an entertaining and cathartic journey. Sure enough, each of our three very diverse stories about chosen families left the audience and chorus in tears. Paul told about how he and his husband Gerry moved to Vancouver from the U.K. and found a home with the chorus. Two years ago, Gerry died of cancer in Paul’s arms, surrounded by friends from VMC. I spoke about being both a PFLAG son and a PFLAG father.

Yogi’s story is about how he came from Indonesia to Vancouver at 18 knowing only two words in English. His biological family had given him two months to choose between “stop being gay” and leaving the country. Now Yogi is a pillar of the arts and queer communities, and President of VMC. 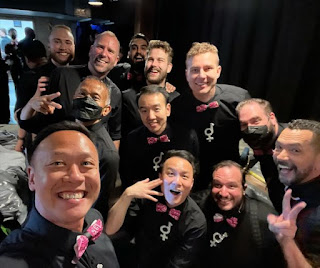 So how did I end up smiling at the audience from the front row?

Yesterday between shows, Willi asked me whether I enjoyed my experience standing in the front row. I explained that my “Executive Function” had been challenged by the cumulative effect of multiple stressors, including kids, legal work, commuting from another country, foreign language memorization, and – my traditional nemesis – choreography. But I survived.

I also told Willi about the audience members who had complimented me on both my speech and my smile. Willi was pleased. He said he was confident I would have said something to him if I thought I couldn’t handle the pressure.

As a writer and a lawyer who has cross-examined numerous witnesses, I have an acute built-in bullshit detector. This set it off. Willi is a brilliant conductor and programmer. He is also one of the most Canadian people I know other than myself. This means he’s preposterously kind and nice, but also passive-aggressively manipulative and ruthlessly efficient.

Over drinks at PumpJack last month, I already told Willi about my first-row struggles. He said he would change the configuration at the next rehearsal. Then he “forgot.” It wasn’t merely his glass of wine. During that conversation, alarm bells also went off when Willi explained I belonged in the front row because of my “height.” I sing in a gay choir filled with Asian tenors. Lots of guys who are just as tall or shorter than me spent the concert safely hidden on the second row.

But I forgive Willi for pushing me a little, and thank him for the opportunity to share my story and my smile. 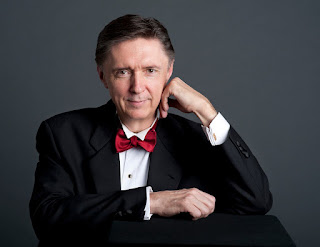 Here’s how Yogi began his speech:

“People ask why I’m always smiling. I guess it’s because I’m so happy.”

Yogi’s and my blinding smiles each began in trauma. But now they’re real. And according to the woman who complimented me after the last concert, she could feel our joy. 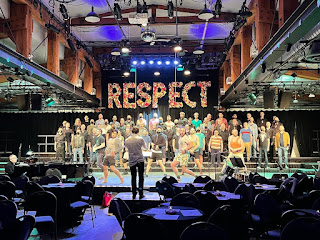