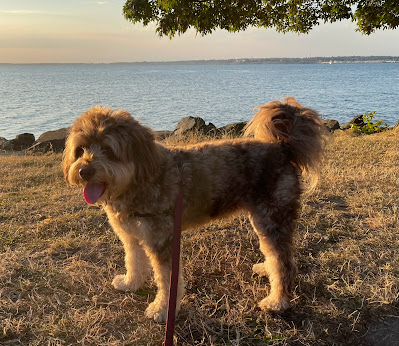 Bear is approaching peak foliage. I can tell from the sudden spike in gushing compliments as we walk along the trail.

Although Bear’s glorious autumnal pelt will be on display for the next few weeks, we didn’t purposely aim to accent the fall leaves with his hairdo. As with every other necessity of life during these trying times, dog grooming appointments are hard to find. Bear and Buster are scheduled for haircuts in October. Until then an increasing proportion of enchanted strangers will swoon on the Boardwalk, and say things like “Your dog is so cute!” and “Aw, fluffy!” 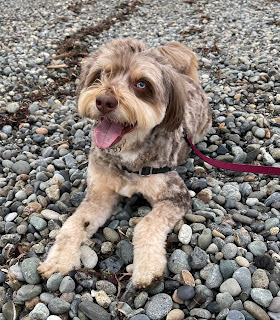 I prefer Bear’s “little rascal” look in the weeks after his haircut. With short curls he looks and feels like a pied plush toy. He doesn’t overheat on walks, or smell too much between baths. And without the wild bangs, it’s easier to see Bear’s charming face and his expressive one-blue-and-one-brown eyes. 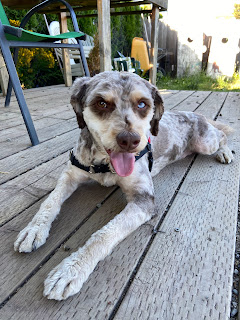 Before I was in charge, everyone just let the dogs’ hair grow. Eventually the tangles and mats get so bad there’s no alternative to getting a buzz cut. My son says when Bear is shaved he looks like a blotchy weasel. 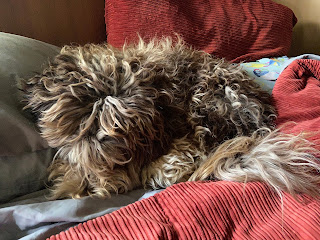 If you wait long enough, Bear’s hair gets so long he looks like a Tina Turner wig. Or a tribble. 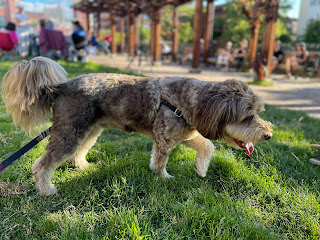 Other than during his blotchy buzzcut phase, Bear is a handsome and well-proportioned canine specimen. (In contrast, Buster has stubby legs and the dead eyes of a serial killer.) Bear is more attractive than anyone I’ve ever dated, and obviously way out of my league.

Bear is also blessed with smarts and a charming personality. If a merchant offers him a treat once, we can never walk past that store again without trading cuddles for snacks. (In contrast, Buster is skittish and has zero recall – each treat at Village Books is an awkward surprise.) Bear has become the favorite of every barista, book clerk, and ice cream scooper in Fairhaven. 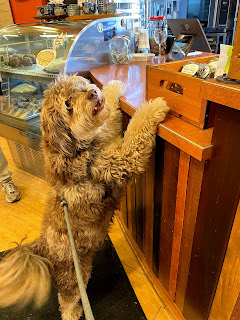 I know it’s time to schedule a haircut when folks start referring to Bear as “fluffy.” (Personally, I prefer the word “shaggy”; “fluffy” feels like poodle shaming.)

But I recognize Bear is more universally attractive when his hair gets a little longer. He’s like the ideal dog produced by an algorithm – not too big for people who like small dogs, not too yappy for people who like big dogs, and with perfect hair for everyone. If Jennifer Aniston were a dog, she would look just like Bear.

So for the next few weeks I will overhear a lot of “oohs” and “ahs.” I will answer questions about Aussiedoodles. I will explain “heterochromia” is the word for having two different colored eyes. I will thank smiling strangers for their compliments, and let them cuddle with Bear.

I won’t tell them I’m not a dog person myself. I’m a Bear person. Bear’s person. 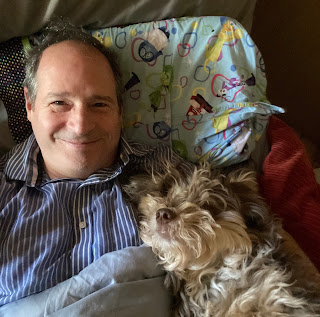