Peacekeepers in the War on Christmas

Vancouver Men’s Chorus is a nation of immigrants.

Almost half of our 100-plus singers were born outside of Canada. We have native speakers who can coach our pronunciation of lyrics from Afrikaans to Yoruba. However, currently I’m the only member of the chorus who commutes to rehearsal from another country.

Each December during the run of “Making Spirits Bright,” VMC’s Asian-Canadian cohort assembles for their annual group photo. If you’re wondering, the membership of the “Vancouver Gaysian Men’s Chorus” is not co-extensive with the tenor section of VMC. This year’s VGMC photograph includes two Basses, five Baritones, five Second Tenors, and five First Tenors. Yogi, who is missing from the photo because he was busy selling raffle tickets during intermission, breaks the three-way tie. Yep, Yogi is a First Tenor.


Vancouver Men’s Chorus presents its major concerts in December and June, with six or seven shows spread over a couple of weeks like glitter. Many community choruses rehearse for months in preparation for just one or two performances. I prefer doing a show multiple times. Opening night offers a thrilling adrenaline rush, but it’s more fun to achieve a smooth routine. Eventually you have the words, notes, and even the choreography down. The audience gets a polished, unterrified performance. The conductor zeroes in on artistic details. Everyone else spends their extra time taking selfies and flirting.

Nevertheless, before each performance we still gather on stage to warm up and review problem spots. Now that the concert run is over, I can reveal my own hopeless causes from Making Spirits Bright XXXIX:

Second, by opening night I accepted I would never memorize every line of rapid lyrics from our Haitian Creole carol. Frankly, there’s no way I can squeeze any more nonsense syllables into my brain without deleting whatever’s left of the seven-times multiplication table.

After the Gaysian photo session last year, we had time to arrange portraits of various other VMC caucuses. The Australian and the Irish contingents each had three singers, which together equaled the six Americans.

One of the other American singers moved to Vancouver with his Canadian husband a few years ago. Mike sang in the Portland Gay Men’s Chorus when I was singing in Seattle Men’s Chorus. Every time our conductor Willi casually refers to Making Spirits Bright as “the Christmas concert,” Mike and I exchange glances.

No one from an American gay chorus has referred to singing in a “Christmas concert” since sometime in the last century. In Seattle and Portland, we always carefully called it “the Holiday concert.”


Despite its No. 1 ranking, Yale Law School is notorious for lax graduation requirements and the absence of real grades. As the Dean said in his welcome address to now-Supreme Court Justice Brett Kavanaugh, me, and the rest of the Class of 1990, “Our goal is to get 90% of you into the top 10%.”

In our day, law students were required to complete one “substantial writing” project at some point before graduation. I did mine for a seminar on religion law, where I compared the American and Canadian constitutions. In the United States, the First Amendment includes two separate clauses guaranteeing the “free exercise of religion” but prohibiting any “establishment of religion.” Everyone agrees American religion jurisprudence is an incoherent mess.

In contrast, the Canadian Charter of Rights and Freedoms simply recognizes “freedom of conscience and religion” among the nation’s fundamental freedoms. Canada’s religion jurisprudence can be summarized as Be More Chill. 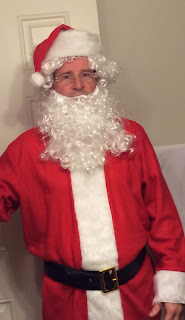 Both Seattle Men’s Chorus and Vancouver Men’s Chorus actually perform songs from an eclectic mix of holiday traditions and in a variety of musical styles. One perennial favourite of Seattle audiences is “A P.C. Xmas,” composed by the talented Eric Lane Barnes. Eric moved to Seattle from Chicago the same year I returned home to the Pacific Northwest, so we ended up working together during both my five years in Windy City Gay Chorus and my fifteen years in Seattle Men’s Chorus.

“A P.C. Xmas” is narrated by Marge Williams, the Pacific Corporation human resources manager organizing this year’s office holiday party. Her verses consist of increasingly frustrated company-wide emails, beginning with her announcement that a local chorus will be entertaining employees with traditional Christmas carols during the office party.

After the Second Tenors sing the first chorus, “Gloria in Exelcis Deo,” Marge responds to employee complaints by assuring folks the party will also feature a selection of secular Christmas songs. For the second chorus, the Lower Baritone section therefore joins the Second Tenors’ “Gloria” with a contrapuntal “Santa Claus is Coming to Town.”

After each bewildered email from Marge, the other choir sections add new layers to the chorus. The Upper Baritones provide a suitably minor-keyed reminder of Hanukkah. The Basses sing about Kwanzaa. The First Tenors offer a devout solstice hymn to the Moon Goddess.

Ultimately, the P.C. office holiday party is canceled. An overwhelmed Marge takes the rest of the year off.

In Canada, Marge would have been chill.

This winter marks my fourth anniversary both as a person living with Post-Traumatic Stress Disorder and as a member of Vancouver Men’s Chorus. In writing about my experiences with SMC and VMC, I hope I haven’t left you with a negative impression about either organization. Both choruses are deservedly respected around the world as exceptional arts institutions and vibrant gay communities. Both choruses have saved countless lives, including mine.

Four eventful decades after their founding, the two organizations have chosen very different paths. SMC has a $4 million annual budget, a large professional staff, and a successful younger sibling in Seattle Women’s Chorus. In contrast, VMC still relies primarily on member volunteers and collaborative governance. At the announcement break in each regular Wednesday night rehearsal from September to June, we sing a rousing “Happy Birthday” to all the guys with birthdays. If there aren’t any birthdays that week, we sing to some of the members with summer birthdays. And when someone becomes a citizen, we sing “O Canada.”

These days Vancouver rather than Seattle is the ideal commute for me, literally and figuratively. As I keep noticing, everything is better in Canada.


Even after a quarter century of gay choruses, I’m too much of an introvert to audition for an actual solo. Nevertheless, the last two years I confronted my anxieties by volunteering for a four measure micro-solo in VMC’s Christmas show. Each occasion involved a primarily dramatic rather than musical role. It turns out the contemporary choral repertoire includes a striking number of holiday songs where a lonely Jewish singer attempts to sing “The Dreidel Song” before being shushed by white supremacists. Even though my heritage actually is Mormon, in both “Making Spirits Bright 2017” and “MSB 2018” I was faux typecast as the outnumbered Jewish guy.

Sadly, despite the best efforts of VMC’s diligent Music Selection Committee, we couldn’t squeeze any jovial anti-Semitism into this year’s MSB theme of “The Colours of Christmas.” It’s probably for the best. This was my first chorus concert as a fulltime single dad, so I wasn’t sure whether I could commit.

In the end I crossed the border for five out of VMC’s seven performances, plus the tech rehearsal, as well as outreach performances in both Victoria and Vancouver. Nevertheless, as usual I skipped the wrong performance. I missed seeing longtime SMC conductor Dennis Coleman in the audience for a rare Vancouver visit. And regardless of your “Where's Waldo?” skills, you won’t find me in the chorus photo at the beginning of this essay.

Here’s what I posted to the internal Facebook page for chorus members:

Once again, I’m missing from the official VMC picture. I blame my children. For everything. (Or being American. Or Jewish.)

It’s important to perpetuate stereotypes, even false ones.

Merry Christmas and Happy Hanukkah
from Bellingham and Vancouver