Numerous studies show the immense social and mental health benefits from singing in a community choir. In particular, nothing has contributed more to LGBT progress over the last four decades than the voices of gay choruses.

This year Vancouver Men’s Chorus marks its fortieth anniversary. We planned a season filled with spectacular celebrations, including a concert with visiting members of the San Francisco Gay Men’s Chorus, the leather granddaddy of LGBT choruses. SFGMC is three years older than each of the exceptional gay choruses I’ve sung with over the last quarter century: Windy City Gay Chorus, Seattle Men’s Chorus, and now VMC. As a 50-something gay man, the difference between ages 40 and 43 seems trivial. On the other hand, as the parent of two fifteen-year-old girls and one twelve-year-old boy, I know three years can make a lifetime of difference. 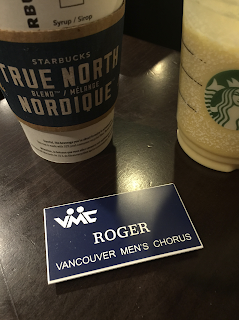 VMC is Canada’s oldest gay chorus, and one of the country’s most successful and resilient arts organizations. Willi Zwozdesky, our founder, is the longest-serving conductor in the worldwide LGBT choral movement. I joined VMC in January 2016 after fifteen years singing in SMC and five years singing with WCGC. Gay choruses save lives, including mine.

According to the president of Chorus America, news coverage about the Skagit Valley Chorale tragedy was “a huge wake-up call that saved lives.” Choruses cancelled all rehearsals and performances. Theaters went dark. A year later, we still cannot blend our voices.

My generation of gay men already endured a deadly plague. At the height of the AIDS epidemic, at least we could sing together. This time our singers face both loss and loneliness. 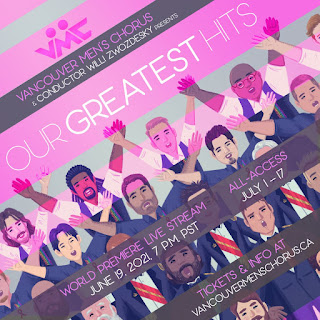 Like many choruses, including Skagit Valley Chorale, this year Vancouver Men’s Chorus turned to Zoom rehearsals and online performances. We’re currently working on a forty-year “Greatest Hits” concert. Yesterday I put on a variety of vintage VMC outfits so my daughters could videotape our first batch of songs. The dogs helped. 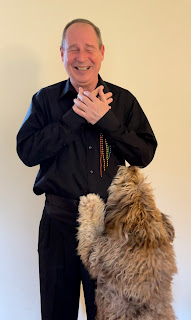 One of the selections in VMC’s upcoming online Greatest Hits concert is a classic French-Canadian folk song, “Un Canadien errant,” which is French for “A Wandering Canadian.” Antoine Gérin-Lajoie wrote the poem in 1842 when he was a young law student. The song originally commemorated patriots who were deported after an unsuccessful rebellion. It has become an anthem for every Canadian who endures the pain of exile.

VMC’s arrangement of “Un Canadien Errant” is by our gifted accompanist and resident composer, Dr. Stephen Smith. Stephen set a simple choral melody against a gorgeous piano accompaniment that ripples like waves under the men’s voices. 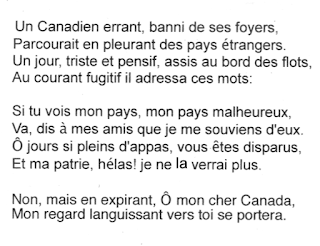 Vancouver Men’s Chorus performs “off-book,” which means we have to memorize all our music. Fortunately, VMC prepares rehearsal tracks that let you hear your part in one ear, and the rest of the chorus in the other ear. Most songs worm their way into memory with enough repetition. However, some numbers need extra effort.

I knew I didn’t have enough time or bandwidth to record all of the songs in the batch of Greatest Hits videos that were due this week. During triage I therefore eliminated the most obvious candidate – a perky dance number from a VMC concert years before my tenure. I was fine with learning new music and lyrics, but memorizing “choralography” is always a challenge. Particularly when I’m trapped at home with three teenagers and two dogs who mock my unswiveling hips.

Fortunately I still remembered a couple of the songs from recent concerts, even with their minimal choreography. And I quickly picked up the new song in English. But I’m terrible at memorizing songs in foreign languages. Most languages involve meaningless nonsense syllables that just don’t stick in my brain. Nevertheless, I’m even worse memorizing songs in French, even though I’ve studied the language. Because I’ve studied the language. Sorta knowing a language turns out to be a distraction. So I need to memorize both the French original and an English translation. I suspect I would have a similar problem with Korean if one of my gay choruses ever picked a K-pop song.

As I wrote last month in “Deadlines,” my improved mental health means an improved relationship with procrastination. I’m better at teamwork. And even when I need more time, I’m better at recognizing avoidance. In this case, I love Stephen’s arrangement of “Un Canadien Errant” and wanted to sing it. But I wasn’t able to finish recording my tracks earlier because the song reminds me I haven’t crossed the border to Canada in over a year:  my longest period of exile since I was a Mormon missionary in Seoul in 1984. 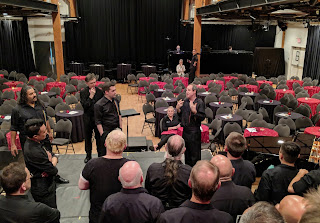 I began publishing essays on this blog four years ago, eighteen months after I was first diagnosed with Post-Traumatic Stress Disorder. By April 2017 I had barely started on the long road to recovery. Nevertheless, I knew I was on the right track when three decades of terrible writer’s block lifted, and I finally began to find my voice. I wouldn’t have made it this far without my family, my writing, the dogs, and Vancouver Men’s Chorus.

Although April is National Poetry Month, I hadn’t written any fiction or poetry since I was in college. I still haven’t yet. But this week I passed another mental health milestone. Here’s my poetic translation I used to help memorize “Un Canadien Errant”:

A wandering Canadian, banished from home,

Traveled through foreign lands in tears.

He sat by the shore, and whispered to the fleeing current:

“If you see my homeland, my tragic homeland –

Go, tell my friends I still remember them,

Even though our days filled with delight are gone.

Be that as it may be. As I take my last breath, my beloved Canada,

I will look back longingly toward you. 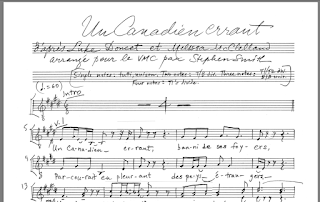