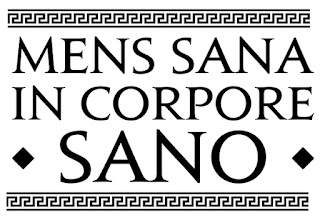 According to the Roman poet Juvenal, a good life begins with Orandum est ut sit mens sana in corpore sano:  “Pray for a healthy mind in a healthy body.” Philosophers and scientists have been arguing for millennia about the relative significance of mind and body .

So where does your brain fit into a mind/body dichotomy?

The evolutionary history of your brain can be compared to piling scoops of ice cream on a cone. At the bottom is the reptilian vanilla scoop of our brain stem. Even the simplest animal has a similar need for these neurons dedicated to basic life support and motor functions. Natural selection subsequently piled on extra scoops to handle our more sophisticated motor needs as mammals.

Meanwhile, evolution added scoops of the fruity flavors that create, regulate, and respond to emotions. Perched precariously on top, at least for humans, is a final delicious scoop containing such revolutionary flavors as the prefrontal cortex, Executive Function, and Theory of Mind. But the ice cream scoops all tend to blend together.

Your brain is the greediest organ in your body – comprising only 2 percent of your mass, while consuming 20 percent of your fuel. The brain’s energy-sucking chemical and electrical processes generate what you experience as your mind. Both mind and body are all about connections:  100 billion neurons linked to each other and to the rest of your body in innumerable combinations and recombinations. Your brain is both hardware and software.

Unsurprisingly, our wires can get crossed. Sometimes in very similar ways. 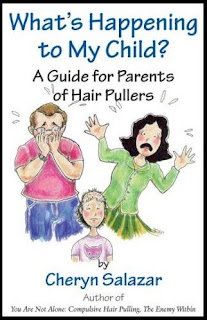 When my physician diagnosed me with Post-Traumatic Stress Disorder almost six years ago, the most obvious indicator among my strange new symptoms was virulent trichotillomania, i.e. compulsive hair-pulling, that primarily targeted my forehead. I’ve made significant progress toward managing the impact of trauma and triggers on my thinking, but my trichotillomania, stammer, humming, and other body tics have only gotten worse.

In my search for answers, I’ve learned how much mental health involves contested labels. For example, in 1973 the American Psychiatric Association removed homosexuality from its Diagnostic & Statistical Manual’s catalogue of mental illnesses after a contentious campaign.

A particular symptom may be listed among the criteria defining multiple disorders, may be identified as its own syndrome, or may be normalized as an example of neurodiversity and healthy variation. We find ourselves using multiple labels to describe basically the same behavioral consequence of crossed neural wiring – including terms like trichotillomania, tics, echolalia, coprolalia, stimming, and stereotypies. 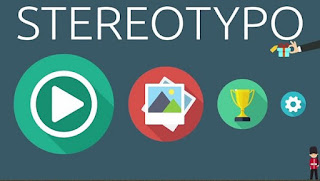 The first time I read the word “stereotypy” I thought it was a typo.

Apparently so did the copy editor at the New York Times. In “The Case Against Zoos,” a guest essay by Emma Marris, the word appears spelled both correctly and incorrectly in the same paragraph:

In many modern zoos, animals are well cared for, healthy and probably, for many species, content. Zookeepers are not mustache-twirling villains. They are kind people, bonded to their charges and immersed in the culture of the zoo, in which they are the good guys.

But many animals clearly show us that they do not enjoy captivity. When confined they rock, pull their hair and engage in other tics. Captive tigers pace back and forth, and in a 2014 study, researchers found that “the time devoted to pacing by a species in captivity is best predicted by the daily distances traveled in nature by the wild specimens.” It is almost as if they feel driven to patrol their territory, to hunt, to move, to walk a certain number of steps, as if they have a Fitbit in their brains.

The researchers divided the odd behaviors of captive animals into two categories: “impulsive/compulsive behaviors,” including coprophagy (eating feces), regurgitation, self-biting and mutilation, exaggerated aggressiveness and infanticide, and “stereotypies,” which are endlessly repeated movements. Elephants bob their heads over and over. Chimps pull out their own hair. Giraffes endlessly flick their tongues. Bears and cats pace. Some studies have shown that as many as 80 percent of zoo carnivores, 64 percent of zoo chimps and 85 percent of zoo elephants have displayed compulsive behaviors or stereotypes.

I encountered the term “stereotypy” last year in Temple Grandin’s book Animals Make Us Human. As a leading expert on animal behavior, Grandin helps pet owners and farmers understand how each species’ brains work, and how humans can create a healthy environment for each type of animal.

Grandin describes animal species responding to frustration and captivity with similar patterns of abnormal repetitive behaviors. For example, gerbils in the wild dig for shelter; caged gerbils dig compulsively, with no productive purpose. As Grandin observes, both humans and animals resort to “normal stereotypies” in “high-tension moments.” A life of near-constant stress can result in a life of near-constant stereotypy. 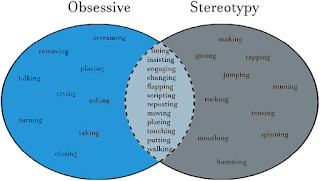 Years ago, a physician friend came back from a global health conference and told me Bill Gates definitely is on the autism spectrum. “Did you examine him? Did he come out from the podium?” I asked.

She said no – she just observed Bill as he rocked back and forth during the speeches. 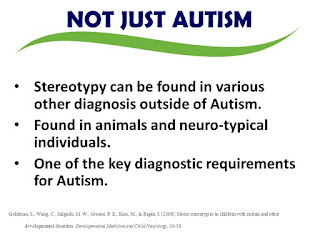 In addition to her experience with animal husbandry, Temple Grandin also is a leading expert on living with Autism Spectrum Disorder. Grandin sees a parallel between animal stereotypies and similar repetitive behaviors in humans who have been diagnosed with various mental disorders, including autism and what used to be called “Asperger’s Syndrome.” (DSM-5 now puts the formerly separate diagnoses of autism and Asperger’s on the same A.S.D. spectrum.)

I never noticed the word “stimming” before this year, but apparently it’s been in use for a couple of decades, particularly within the autism community. Stimming refers to "self-stimulating behaviors, usually involving repetitive movements or sounds." 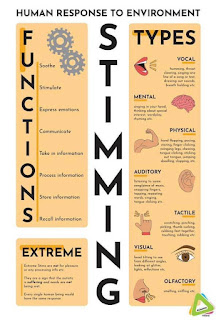 This year I’ve been reading my way through all of Oliver Sacks’ books. Dr. Sacks, a gay Jewish British immigrant who died in 2015 at age 82, was a distinguished neurologist and a best-selling author who wrote with elegance and humanity. Dr. Sacks always maintained a busy clinical practice. The real-life neurological case studies he explored in his various books provide another illuminating perspective on how the neural networks connecting our brains to our bodies’ motor functions can get their wires crossed.

Many of Dr. Sacks’ patients suffered from Parkinsonism and related disorders where the mind loses control over the body, including dyskinesia and Tourette’s Syndrome. Doctors treat these diseases with the same types of anti-psychotic medications as they prescribe for serious mental illnesses like schizophrenia. On a cellular level, thinking and acting are a matter of chemistry.

According to the Oxford Dictionary, “coprolalia” is “the involuntary and repetitive use of obscene language, as a symptom of mental illness or organic brain disease.” (I’m not a lexicographer, but should we really think of “mental illness” as some kind of inorganic brain disease? Mind/body dualism fails us once again.) Coprolalia is seen in some people with Tourette’s Syndrome – but also in nursing home residents whose stroke damage or dementia lesions have targeted particular brain regions, resulting in little old ladies who swear like sailors.

Oliver Sacks offers the hope of integration. In Musicophilia: Tales of Music and the Brain, he writes about professional musicians with Tourette's Syndrome who are able to harness the energy fueling their tics and direct it toward their creativity:

Tourette’s brings out in stark form questions of will and determination: who orders what, who pushes whom around. To what extent are people with Tourette’s controlled by a sovereign “I,” a complex, self-aware, intentional self, or by impulses and feelings at lower levels in the brain-mind? Similar questions are brought up by musical hallucinations, and brainworms, and varied forms of quasi-automatic echoing and imitation. Normally we are not aware of what goes on in our brains, of the innumerable agencies and forces inside us that lie outside or below the level of conscious experience—and perhaps this is just as well. Life becomes more complicated, sometimes unbearably so, for people with eruptic tics or obsessions or hallucinations, forced into daily, incessant contact with rebellious and autonomous mechanisms in their own brains. They face a special challenge, but they may also, if the tics or hallucinations are not too overwhelming, achieve a sort of self-knowledge or reconciliation that may significantly enrich them, in their strange fight, the double lives they lead. 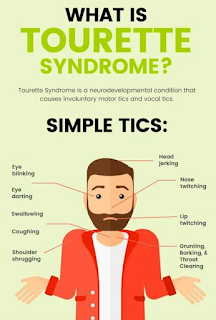 Our dog Buster is a bundle of tics. Most recently, Buster gave himself an unsightly bald patch. It’s on his butt, instead of on his forehead like my own trichotillomania handiwork. 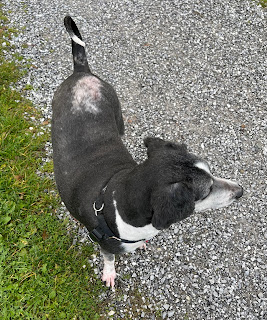 Whenever Buster’s fur reaches a certain length it becomes hopelessly matted. “Mats” form when dog fur becomes tangled and wraps around itself, forming tight clumps of dead and live fur. “Doodle coats are a blend of a curly coat and a double-coat, making them the perfect storm for matting.” Eventually there’s nothing the groomer can do besides give them a buzzcut.

Aussiedoodles are supposed to be “non-shedding.” It’s true to a point. This year when Buster’s fur reached critical mass he started scratching uncontrollably as he tried to pull out all the mats. The floors became covered with black clumps that looked like furry cockroaches.

It takes six weeks to get a dog groomer appointment. Buster couldn’t wait. Fortunately, we found a friend with canine clippers who volunteered to relieve Buster’s distress. Unfortunately, some of the mats were too close to his skin. An unrecognizable Buster came home shorn and with a few razor nicks – which he couldn’t resist scratching.

We had to get the Cone of Shame out of the garage. Buster is spending a few days relying on this plastic restraint to moderate his compulsive scratching – just like Papa fiddles with unfuzzy things to keep his hands away from his scalp. In the last few years I’ve learned a lot about impairments to both human and canine mental health. I’ve started to remove the cause. But not the symptoms. 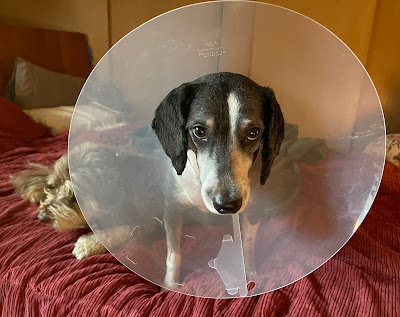