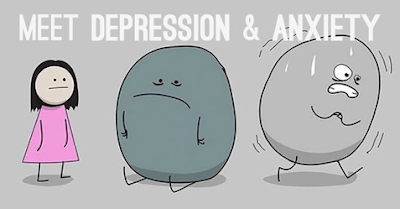 “Depression” and “Anxiety” are labels for the two categories of mental illness that affect the largest proportion of the population. Here is a model I’ve found useful for contrasting these two distinctive types of mental experiences:

I was introduced to this dichotomy years ago when I read Andrew Solomon's The Noonday Demon: An Atlas of Depression. Solomon described depression and anxiety as "fraternal twins." As Michael Pollan recently observed in his excellent new book How to Change Your Mind, "Both reflect a mind mired in rumination, one dwelling on the past, the other worrying about the future. What mainly distinguishes the two disorders is their tense."

The skewed responses of anxiety and depression are rooted in powerful emotions that generally benefit the species. Humans should worry when a saber-toothed tiger is approaching at high speed. And we should grieve at the loss of a loved one. When these two healthy emotions lose proportion and negatively affect important aspects of our lives, however, they become potentially deadly disorders. 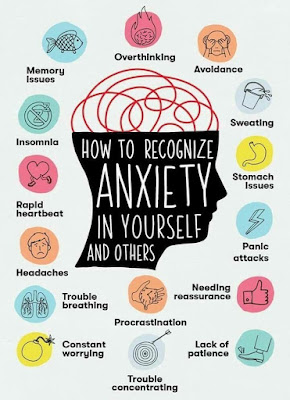 As I described yesterday in “Lawyer Personalities,” lawyers rank in the bottom percentile for “resilience,” which Dr. Larry Richards describes as “the degree to which a person bounces back quickly from criticism, rejection or setbacks.”

I’ve had less personal experience with depression, and much more experience with anxiety. It’s exhausting. Sustained stress wears out our bodies and minds. This is the lack of “resilience” Dr. Richards sees in lawyer personalities. We’re much too concerned about what might go wrong, and what other people might think. You know the cliché “A coward dies a thousand deaths, a brave man only one”? An anxious person endures endless imagined death wounds.

When bad things actually happen to me, I’m usually “resilient” in the word’s ordinary sense – exhibiting grace under pressure, and bouncing back from actual adversity.1 It turns out I’m much more afraid of potential failure than I’m ever hurt by actual failure (or rejection, or disaster, or disappointment….) That’s the evolutionary advantage of being an anxious person: things seldom turn out nearly as badly as you imagine. And on those occasions when things are as awful as you feared, you get the compensating satisfaction of being right.

1Adversity and trauma are not necessarily the same thing. I’ve written about how unresolved trauma may result in Post-Traumatic Stress Disorder, which is a separate type of mental illness. Nevertheless, PTSD correlates with depression and/or anxiety, and involves some of the same symptoms. 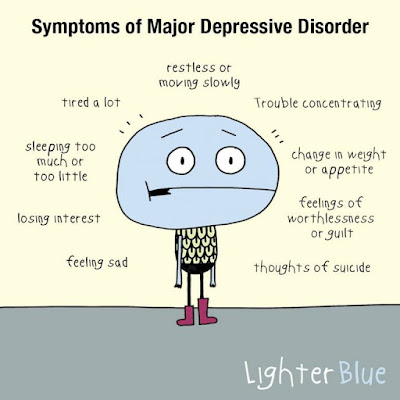 In contrast with my mostly managed anxiety, I’ve personally experienced major depression only a couple of times in my life: thirty years ago at BYU, and a couple of years ago at the nadir of my struggle with discriminatory and hostile employers.

Both times my mind responded to traumatic life events with sustained anhedonia and destructive impulses that were out of proportion to actual events, horrific as they were. Both attacks left me beyond the reach of reason, and exceeded the capacity of my ordinary mechanisms for coping with grief. 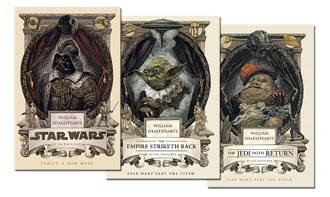 I love Star Wars. I practically worship Shakespeare. Surely I would be the perfect audience for a series of dramatic adaptations written in Elizabethan verse? Ya’d think.2

2My lawyer-honed skepticism was well founded. A small bookstore sample confirmed the gimmick was unsustainable/unreadable beyond a page or two.

I’m very picky about my genres. A “genre” is a “category of artistic composition, as in music or literature, characterized by similarities in form, style, or subject matter.” Some genres by their nature are likely to attract me: writer memoirs, cozy murder mysteries, BBC comedies, impressionist painters, etc. Other genres offer less promising candidates: Alexandrine verse, rap music, country music other than Christmas albums by Amy Grant.

Nevertheless, I’m also attracted to works that perfectly exemplify, transcend, or subvert any genre. Which brings me to a very contemporary genre: the TED Talk. 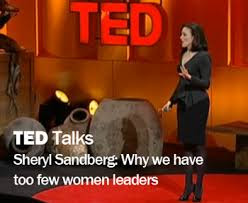 Sheryl Sandberg is the Chief Operating Officer at Faceback. She’s the author of the bestselling book Lean In. I haven’t read the book or seen any of Sandberg’s numerous TED Talks and other speeches. A cursory look at Wikipedia suggests Lean In is some kind of post-capitalist-neo-feminist manifesto. Not one of my go-to genres.

Recently I picked up Sandberg’s subsequent book, Option B, from the “New Arrivals” section at Bellingham Public Library. According to the book jacket, it’s a memoir about how Sandberg processed the loss of “Option A” from her life. Sandberg’s husband died from a sudden heart attack, leaving her with two small children, a high-powered career, and a global communication platform. I figured I had made enough progress with my own grieving process that I was ready either to appreciate Sandberg’s wisdom, or to fling the book across the room in bemused disgust.

At first, I found Sandberg’s style exasperating. Although Option B purports to be told from Sandberg’s first-person perspective, the book was obviously written by a committee. The kind of committee involved in Hillary Clinton’s inept presidential campaign. Sure enough, Sandberg’s voluminous Acknowledgements section identifies numerous co-writers, editors, and researchers. The result:  Inoffensively bland prose. Humble-bragging anecdotes (Did you know Sandberg had the honour of throwing a dinner party for Nobel-winning-girl-advocate Malala?). Home-spun factoids that could have come from the pages of USA Today, or from one of Ronald Reagan’s notecards. An affirming ending.

Then something clicked. I realized I wasn’t reading an ordinary book – I was consuming a TED Talk in book form. A practically perfect TED Talk.

Although I’d never heard Sandberg speak, my brain immediately generated the corresponding voice in my head for her narrator. It was the kind of voice you associate with flawless nails and perfectly timed PowerPoint slides. With Malcolm-Gladwell-New-Yorker-article-counterintuitive-but-not-really insights. Focus-group-tested timing. And sensible but intimidating high-heel shoes.

This may be a dated reference, but the associated image came not from Sandberg’s dust jacket portrait, but rather from a speech at the 1996 Republican National Convention. Do you remember when Elizabeth Dole introduced her presidential-candidate husband? Senator Bob Dole was the Senate leader and a modest war hero. As she spoke, his wife “casually” walked among the convention delegates with a hand-held mic. The text of her speech was just as shellacked as her Southern hairdo. Dole's rhetorical performance eerily anticipated speakers like Sheryl Sandberg and the whole TED Talk genre. 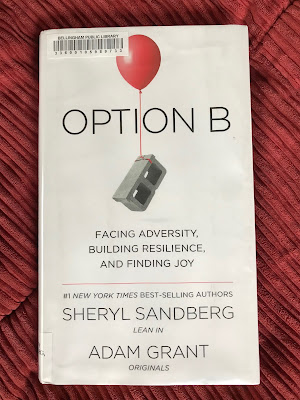 As someone with a lot of book learning as well as even more real-life experience dealing with trauma and grief, I would recommend Option B as useful primer on the subject. Not just as a quintessential example of the TED-Talk-in-print genre.

But I probably can thank Sandberg’s named co-author for the one mental PowerPoint slide from Option B that still sticks with me weeks after finishing the book. Adam Grant is a prominent psychologist who teaches at Wharton Business School. Dr. Grant presumably is the source of much of the book’s clinical advice, including the following:

After spending decades studying how people deal with setbacks, psychologist Martin Seligman found that three Ps can stunt recovery: (1) personalization – the belief that we are at fault; (2) pervasiveness – the belief that an event will affect all areas of our life; and (3) permanence – the belief that the aftershocks of the event will last forever. The three P’s play like the flip side of the pop song “Everything Is Awesome” – “everything is awful.”  The loop in your head repeats, “It’s my fault this is awful. My whole life is awful. And it’s always going to be awful.”

Hundreds of studies have shown that children and adults recover more quickly when they realize that hardships aren’t entirely their fault, don’t affect every aspect of their lives, and won’t follow them everywhere forever.

I wish I had figured out the three P’s a long time ago. 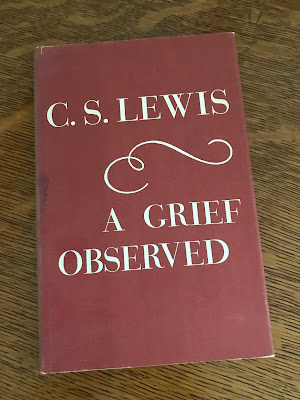 Perhaps TED Talks are not your cup of tea. If you want to read what an actual writer has to say about passing through grief, track down a copy of C. S. Lewis’ slim A Grief Observed.

It’s no surprise Sheryl Sandberg name-checks Lewis’ 1961 classic on first page of her introduction. Lewis was a confirmed bachelor who married late in life, only to lose his wife to cancer within a few years. A Grief Observed is his powerful journal.

Sandberg quotes Lewis’ opening sentence: “No one ever told me that grief felt so like fear.” Ever elegant and insightful, C.S. Lewis captured how the symptoms of anxiety and depression can ultimately converge.

Don’t be afraid to ask for help. 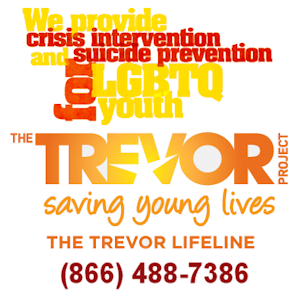