The Tragedy of the Commons

For the umpteenth consecutive year, my parents are spending most of January in Hawaii. FYI, fabulous gay retirees snowbird in Palm Springs instead. Unemployed middle-aged single dads are stuck in the grey Pacific Northwest with their children and a bottle of Vitamin D pills.

This year I’m house sitting for my parents while they’re gone. Their house comes with the keys to my mom’s Honda Accord, which gets much better gas mileage than my ancient Kia minivan. The Accord sports numerous bells and whistles that weren’t available ten years ago, at least in Korean minivans. Refreshingly, my mom’s sedan also lacks the visible scars left by a decade of ravaging children. On the other hand, the Honda is so much lower than my car that I feel like I'm driving a go kart.

I bought the minivan exactly ten years ago this month, when I had three young children in clunky car seats and needed lots of extra room. If you haven’t already guessed, I loathe my car. Unfortunately, I can’t afford to trade in the minivan until my employment situation improves.

Nowadays my parents’ house also comes with my nephew, who is living with them while he finishes high school. This week I had my kids as well, so my nephew stayed with us across town. (Yes, Mom, I turned the thermostat down while we were gone.)

Over the MLK long weekend, I begrudgingly left the Honda in my parents’ garage. I wanted the kids to unplug, go outside into the unexpected sunshine, and enjoy some family adventures each day. An Accord is not designed to simultaneously accommodate three teenagers and a fifth-grader – not to mention my kids’ two energetic Aussiedoodles, who are obviously unwelcome in my mother’s pristine vehicle.

After a long weekend with the kids, the dogs, and the minivan, I couldn’t resist switching back to Mom’s Honda. For the gas mileage, of course. 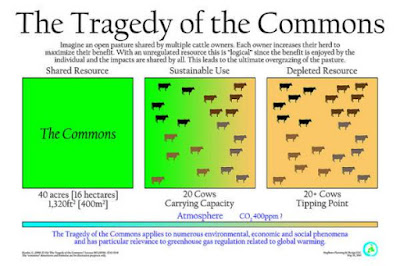 Ecologist Garrett Hardin’s 1968 Science essay “The Tragedy of the Commons” is one of the most cited and reprinted scholarly articles of all time.

As Hardin describes, before the modern era many communities shared a common pasture. Each citizen had an equal right to use this land. Numerous New England towns are still arranged around a venerable “Commons,” although cattle are no longer welcome to graze in what are now public parks.

Hardin’s article explains how perverse individual incentives can ruin things for everyone. Each farmer correctly determines that introducing one more cow to the Commons isn’t going to result in overgrazing. But if everyone adds one more cow, the total number of cattle will quickly exceed the pasture’s capacity. The consequence of such collective overgrazing is to degrade the Commons to the point that it will no longer support any cattle.

Free markets are good at many things, such as encouraging innovation, and efficiently communicating information about the preferences of numerous independent actors through the mechanism of pricing. On the other hand, markets can also fail. The Tragedy of the Commons provides a useful introduction to various destructive examples of market failure, including “negative externalities” like pollution, monopolies, “free rider” problems, political gridlock, and accelerating inequality. 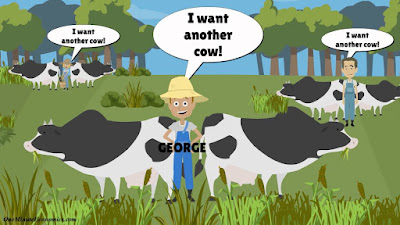 While my nephew was staying with us, each morning I drove him across town to the new high school near my parents’ house. On Tuesday morning, one of my exertion-avoiding children decided to hitch a ride to school with us rather than walk down the hill. That evening, all three of my children announced they wanted a ride to school the next day. 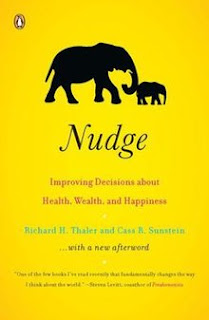 The Tragedy of the Commons, like other market failures, arises when individual incentives conflict with collective goals.

As I’ve previously discussed in various blog posts, psychologist Daniel Kahneman offers a useful model of how our brains rely on two contrasting mental processors, which I've referred to as Thing 1 and Thing 2. The first system is fast and automatic, constantly multi-tasking as it retrieves memories and generates intuitions. In contrast, the second system allocates our brains’ limited conscious attention to effortful mental tasks. Thing 2 would prefer to lazily coast along with the information and unconscious assumptions it receives from Thing 1. As a result, human decision-making is subject to various predictable biases.

In 2008, law professor/Obama buddy Cass Sunstein and Nobel laureate/behavioral economist Richard Thaler published an influential book entitled Nudge: Improving Decisions about Health, Wealth, and Happiness. Sunstein and Thaler argue that policy makers should promote positive outcomes by taking advantage of the brain wiring biases identified by psychologists like Kahneman. For example, we can dramatically increase the participation rate for retirement savings accounts by setting up automatic enrollment programs, and then requiring employees to opt out of them rather than affirmatively opting in. 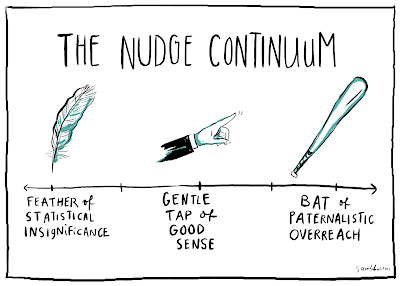 Before bedtime on Tuesday night, I announced that anyone was welcome ride to school with us in the morning – but they would have to get up 15 minutes early in order to accommodate the additional drive time.

Sure enough, on Wednesday morning my little nudge deterred at least one of my indolent children from riding in the Honda and overcrowding the rest of us. Tragedy averted. 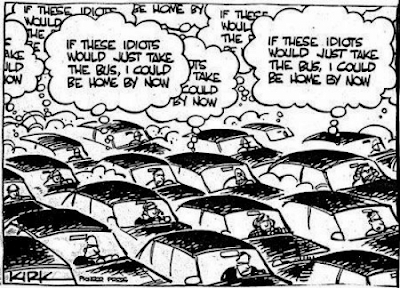