The Shelf Life of Metaphor 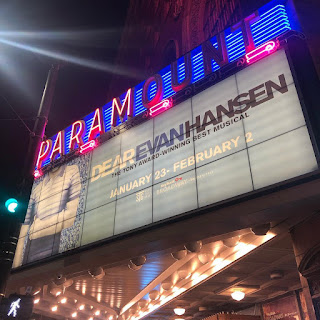 The correct answer is (b). Obviously.

As Dear Evan Hansen teaches us, social anxiety can be a lonely thing. Fortunately, one of the advantages of having a Drama Queen daughter is you’ll always have someone to accompany you to the theater.


You also get to banter like Jack & Karen, or sometimes Will & Grace, while the other two family members stare in confusion. I recently wrote in one of my notebooks that “Eleanor and I are in a different area code compared to Rosalind and Oliver.” The two of us belong in the (212), while they're more bus-and-tunnel. 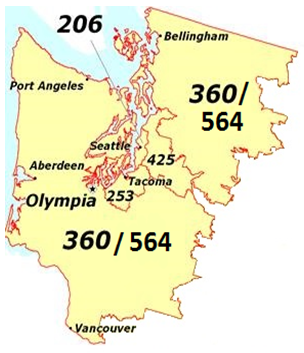 Area codes are not just a metaphor.  As Eleanor would say, for once correctly, she and I "literally" have a different area code than her brother and sister. Eleanor and I got our first iPhones when we still lived in Seattle, so we’re (206). Rosalind and Oliver are (360).

I only know my kids’ area codes, not their actual phone numbers. Instead, I rely on my electronic Contacts list to keep track of my kids’ phone info, just like everyone else.

In fact, I only know four phone numbers by heart: my own cell phone number, my ex’s cell phone number, the Bellingham landline number my parents have used for 37 years, and my childhood phone number in Vancouver. Frankly, the only reason I can still remember the first three is that I’m constantly filling out the paperwork for school field trips.

My children were unimpressed that Grandpa milked cows twice a day by hand when he was their age. Nor did they think much of my feat of memorizing all my friends’ phone numbers in high school.

However, they were amazed that I only had to dial five digits to call my friends. In rural Brigham City during the 1970s, all the phones in town still were on the same exchange. 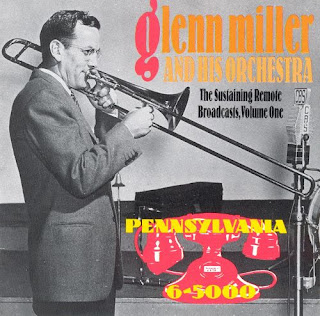 Beginning in the 1930s, urban phone numbers were written in the “two letters, five numbers” format. For example, PEnnsylvania 6-5000 was and is the phone number of the Hotel Pennsylvania in midtown Manhattan. Like the hotel’s neighbors, its phone number began with the two-letter abbreviation for the Pennsylvania exchange, which served the area around Penn Station.

By the 1980s, you needed seven numerals to write down someone’s phone number, regardless of where you lived. Like the song “Jenny.” As you will recall from AM radio, Jenny can be reached at 867-5309.

Back then, a single area code covered a vast geographic territory. Today the same song wouldn’t work in most cities, because any helpful bathroom graffiti artist would also include Jenny’s area code. 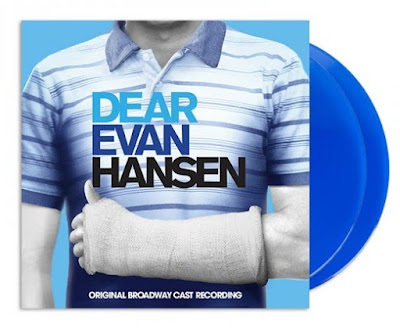 I’ve been listening to the original cast album from Dear Evan Hansen on repeat ever since I got back from seeing the Broadway musical in Seattle last weekend with my daughter and nephew. I love it. If you haven't noticed already, I'm completely obsessed.

Currently, my favorite song is “Waving Through a Window.” This is Evan Hansen’s first solo in the show. He describes how his debilitating social anxiety makes him feel alienated from everybody else:

ON THE OUTSIDE ALWAYS LOOKIN’ IN
WILL I EVER BE MORE THAN I’VE ALWAYS BEEN?
‘CAUSE I’M TAP-TAP-TAPPIN’ ON THE GLASS
WAVING THROUGH A WINDOW

OH
CAN ANYBODY SEE?
IS ANYBODY WAVING BACK AT ME?

The song’s primary image is a person standing on the outside looking in, unable to be seen or heard. But the song actually begins with a different metaphor:

I’VE LEARNED TO SLAM ON THE BRAKE
BEFORE I EVEN TURN THE KEY
BEFORE I MAKE THE MISTAKE
BEFORE I LEAD WITH THE WORST OF ME….

Evan sings these same words one other time near the end of the play, right before the climax of his final anthem "Words Fail": 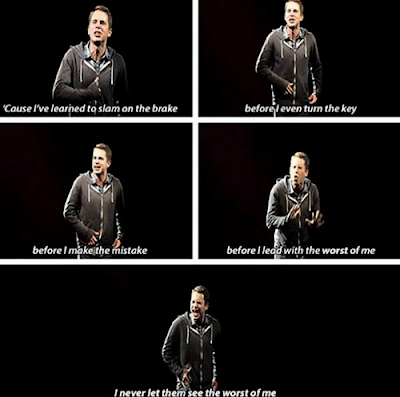 As I recently mentioned, while housesitting for my parents this month I’ve been driving my mom’s spiffy Honda Accord. It’s a huge step up from my ancient minivan. For example, a video screen helps me back up. And I can plug my iPhone into the stereo system and listen to showtunes.

The Accord also features a keyless ignition. As long as the electronic fob is in my pocket, I can open the doors and operate the car just by pushing a button. However, as a safety precaution, the car won't start unless you press the brake pedal before you turn on the engine.

I’ve barely met Evan’s brake-and-ignition metaphor, and it’s already out of date. Dear Evan Hansen is ruined for me. 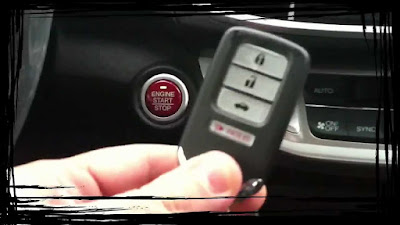 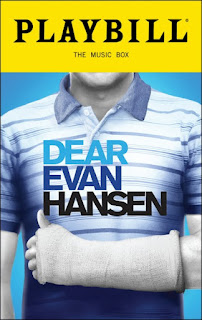