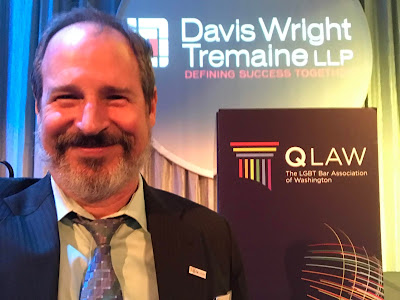 Last week I braved Seattle traffic to attend the annual LGBT lawyer banquet. The event’s lead sponsor was the law firm where I used to be a partner. I hugged lots of old friends, and watched the Davis Wright Tremaine logo behind the podium all night.

During dinner I sat next to the keynote speaker, Victoria Baranetsky, who is General Counsel at the Center for Investigative Journalism. These are challenging times for free speech and a free press. As the LGBT and LGBT-friendly audience listening to Victoria recognized, vulnerable communities depend on journalists with the courage to speak truth to power. 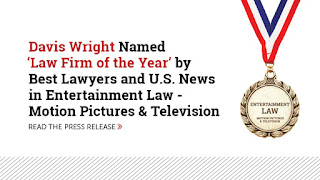 I served as a volunteer attorney, board member, or staff lawyer with the American Civil Liberties Union for most of my legal career. For the last three decades, LGBT rights have been an essential part of the ACLU’s mission. And for over a century, the ACLU has been the preeminent advocate for free speech and other civil liberties guaranteed by the First Amendment. I’m proud of my long association with the ACLU.

Even if they’re familiar with the ACLU’s work, most folks haven’t heard of my former law firm Davis Wright Tremaine. Beyond its home in the Pacific Northwest, DWT is primarily known for its media and First Amendment work. The same day as the Q-Law banquet, The Hollywood Reporter published an article about DWT under the headline “Meet Trump's Least Favorite Lawyers.”

While I was at DWT, our media attorneys in the New York and Los Angeles offices represented literary clients like J.D. Salinger and the Oscar Hammerstein estate, and broadcasters like CNN and CBS. (My DWT partners successfully challenged the FCC's sanctions after the infamous Super Bowl “Nipplegate.") More recently, DWT has advised John Oliver and Samantha Bee, and defended Buzzfeed’s disclosure of the Steele Dossier.

DWT’s press clients also play offense – such as arguing in federal court that the public had the right to know the identity of Michael Cohen’s other, non-Trump client. (FYI, Sean Hannity definitely needs shady real estate advice.) When Donald Trump threatened to sue the publishers of Fire and Fury: Inside the Trump White House, DWT responded with a scorching letter reminding the Trump Organization that attempting to use private nondisclosure contracts “as a blanket restriction on members of the government speaking to the press is a perversion of contract law and a gross violation of the First Amendment.” 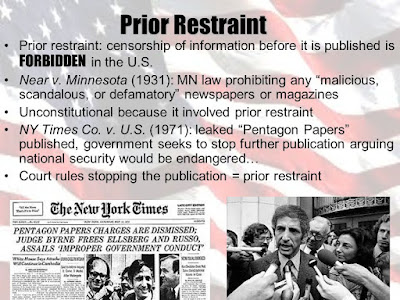 The First Amendment forbids the “prior restraint” of free speech or a free press. Robust dialogue is essential to any functioning democracy. Even in these dark times of kleptocracy and Fake News, the remedy for bad speech is eternal vigilance, together with more – and hopefully better – speech.

On the other hand, just because you can say something doesn’t mean you should. Writers need to take responsibility for their actions, and to anticipate the consequence of their words. Whenever I wonder about the advisability of publishing something, I ask myself “If I could afford to hire Bruce Johnson or Liz McNamara at DWT, what would they tell me to do?” 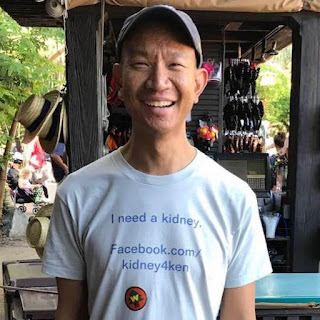 In “Enough Hope,” I recently outed my friend Dr. Ken as a kidney patient and dessert addict. Of course I texted to give him a heads up.

Roger:         Ironically, I just started a new essay named “Prior Restraint”
I offered to run my recent blog posts before my family first, but they would rather rely on guilt

Dr Ken:       I don’t need to approve before publishing  Lol

Roger:         See, now you’ve snuck your way into yet another blog post. Before it was just my mom. And my former law partners.
Are you competing with Eleanor for the Drama Queen crown?  Have you been watching too much RuPaul’s Drag Race? 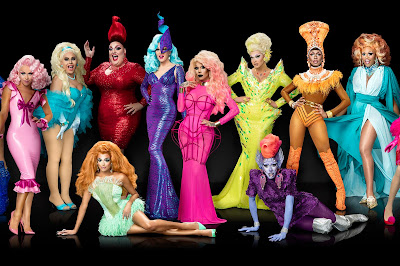 Although my family turned down the opportunity to review blog material in advance, they still make sure to inform me when they disapprove of something I’ve published. In their passive-aggressive way.

For example, last month in “Prodigals” I wrote about my parents’ house becoming overcrowded as multiple children and grandchildren invite themselves home to roost. I knew exactly which sentence in the original version of the essay would bother my mother. It bothered me as I wrote it:

My parents have been luxuriating in retirement for more than a decade – cruises, winters in Maui, golf, bowling, PFLAG meetings, bridge, book club, dance classes, sports on TV, innumerable books…. Sadly, as with so many disrupted empty-nesters nowadays, the party’s over.

Sure enough, the following week after dinner my mother quietly observed they’ve never spent a whole winter in Hawaii.

In “Shaving the Beard,” a blog post I published almost a year ago, I provided additional details about my parents’ post-retirement travel habits:

Every winter, my parents and their longtime best friends make a snowbird pilgrimage to Hawaii. What began as a couple of weeks of Maui sun has expanded to almost a month. At least for the wives. After wearying of golf and papaya, the husbands generally fly home a week early.

In contrast, my more recent post's snowbird reference was just one item in a long list of retirement pastimes. As I was drafting, I also tried “cruises, an annual month-ish in Maui, golf, bowling,” etc. But that was wordy, and threw off the sentence’s rhythm. Both “a month in Maui” and “months in Maui” would be misleading. Finally I gave up tinkering and went with the exaggerated “winters in Maui.” But the sentence kept gnawing at me.

As sometimes happens, I couldn’t resist a little post-publication editing. Microsoft Word accepted either “Januaries” or “Januarys” in Maui, but both looked wrong to me. Eventually I went with “January in Maui,” which is reasonably accurate and scans well. If you check the link to “Prodigals,” you’ll see I already made the correction. Even before mom said anything.

For the record, the “Grandma” who appears in various narratives should be distinguished from my actual put-upon mother. Similarly, I assume everyone realizes the Drama Queen/ hypochondriac character named “Eleanor” is not the same as my real-life teen-aged daughter Eleanor. (Although I challenge readers who are familiar with both to identify any differences. Go ahead, text me.) Dr. Ken is a figment of my imagination.

I’ll leave it to their consciences to find the truth in each story, just as they leave it to mine.