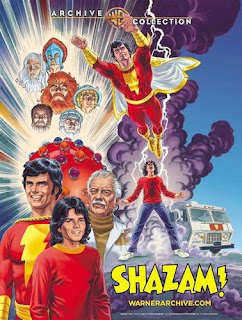 I've never been into comic books, and I grew up before Christopher Reeve’s Superman kicked off the cinematic superhero renaissance. Instead, I saw my first superhero on Saturday morning television. My introduction to the caped-crusader universe was Shazam!, which ran on CBS from 1974 to 1977.1

1Adam West’s TV Batman is not an actual superhero, and he doesn’t have real superpowers. He’s more of a camp icon, like RuPaul.

“Shazam” is the magic word teenaged Billy Batson says when he transforms back and forth into his buff alter ego. It’s an acronym that comes from the names of the six heroes who give Billy his superpowers during the series’ animated title sequence - Solomon, Hercules, Atlas, Zeus, Achilles, and Mercury.

When the character made its comic book debut in 1939 he was named “Captain Marvel.” Subsequent trademark disputes left DC Comics owning the character but not the title, so he’s been re-branded as Shazam. The exclamation mark must be a surname. 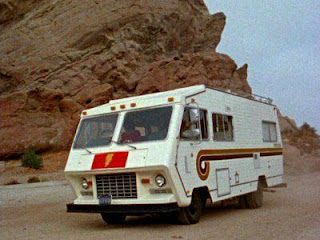 Appropriately for its 1970s Saturday morning timeslot, Shazam! was a blatant Public Service Announcement, with cheesy production values. Billy rode around California with his unimaginatively-named mentor “Mentor.” He performed such heroic deeds as preventing reckless joyriding, and catching high school students who cheat on tests. Each 30-minute episode ended with a clumsy moral lesson. I don’t remember much else about the show, other than the rad mobile home and the mounds of feathered hair.

Shazam! was paired with The Secrets of Isis, which Wikipedia helpfully encapsulates as a show “about an Ancient Egyptian superheroine resurrected in the body of a schoolteacher.” Like Shazam, Isis would say her ancient name in order to switch between alter egos. However, instead of provoking lightning bolts, her transformation involved an eerily diminishing echo: “Oh Mighty Isis” (“Isis Isis Isis Isis….”). I still mimic its timing in my head every time Vancouver Men’s Chorus sings a decrescendo.


My son Oliver is currently in fifth grade, which means this is the last year we’ll enjoy elementary school early release on Thursdays and get to see matinees without his sisters.

It's been a while since we went to a movie. Oliver turned up his nose at Missing Link and How To Train Your Dragon 3, and I vetoed Hellboy and Pet Semetary. Obviously we’ll be seeing Avengers: Endgame soon. In the meantime, this week we agreed on the new Shazam! movie. 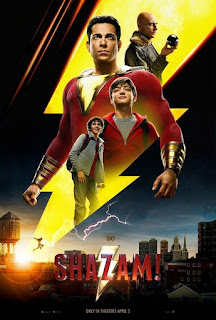 We both enjoyed Shazam!  In contrast with DC Comics’ recent string of dark and brooding movies, it was refreshing to watch a superhero having unadulterated fun.

As I’d gathered from the pre-opening buzz, Shazam! is reminiscent of 1988’s charming Big. Like Tom Hanks, actor Zachary Levi does an excellent job of channeling teenaged Billy’s glee with his new powers to zap things and to buy beer without an ID. The homage is not limited to subtext. During a chase in a mall, Shazam comes upon an oversized piano keyboard on the floor, and can’t resist pausing to stomp out a few notes. 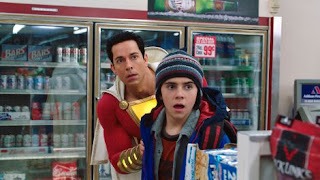 What surprised me about Shazam! was how long it took to get to the fun – and the emotionally bleak landscape we had to wander through first.

The movie begins with a couple of flashbacks. The future hero and the future supervillain both are rejected by their families of origin, and grow up bitter and broken. Young Billy Batson’s story begins with his single mother at an amusement park. His mom wins a lame plastic compass at a seedy arcade game, rather than the cool tiger Billy had his eye on. She tells him the compass will always lead him home. Billy immediately drops his compass, and then gets lost in the crowd as he tries to retrieve it. His mother disappears, and Billy grows up in the foster system.

During the next decade, Billy runs away from numerous foster homes because he’s on a quest to find his mother. For the first thirty minutes I kept wondering if we'd wandered into the wrong movie theatre. 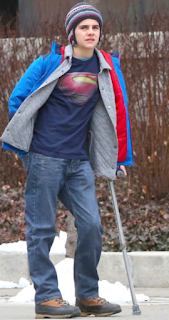 Billy’s foster system origin story shouldn’t have come as a complete surprise. When I saw the Shazam! trailer the last time Oliver and I went to the movies, my favorite moment came when Billy meets his new foster brother. Freddy is a motor mouth who can’t help joking about disaster, and everything else. He ends his spiel to Billy with a deadpan “You look at me, and you’re like ‘Why so dark, you’re a disabled foster kid – you’ve got it all.’”

Midway through the movie, Billy is placed in an ideal group home, headed by an interracial couple who both are alumni of the foster system themselves. My favorite character in the movie indeed turned out to be Freddy, who copes with challenges he can’t hide by saying too much. The other foster kids in the home take different approaches to their situation: the wordless big guy, the overachieving good girl, the Asian teen who disappears into technology, the excessively-affectionate little black girl. Like all coping mechanisms, eventually each approach can get in the way of your growth.

The group home’s multiracial mix feels like the kids were ordered off a menu from Central Casting. But one of the pleasures of a non-biological family is how it stirs up the gene pool. You’re much less likely to end up with four brothers sharing identical foreheads and the same stoic sarcasm.

After some initial prickliness, Billy bonds with his new siblings. The Asian hacker brother tracks down Billy’s birth mother, and he confronts her in a brutally unsentimental reunion. She’s in another abusive relationship, and can’t let him into the apartment. She admits that she saw young Billy after he disappeared into the crowd at the amusement park, but she decided he was better off without her. Before returning to the group home, Billy gives her the plastic compass, saying she needs it more than him. His mom doesn’t even remember it. As one critic observed, the scene is an example of “what Shazam! gets right about the emotions of foster children.”

As I’ve previously recounted, the foster system is filled with tragedies and epic failures. Nevertheless, there really are heroic foster/adopt parents out there who take on tough challenges like Billy and Freddy. Kudos to intrepid foster parents like Amanda, Goran & John, and Jack. 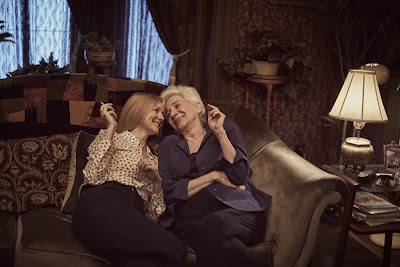 This June for Pride Month, Netflix is releasing a sequel to the classic miniseries based on Armistead Maupin’s Tales of the City. Laura Linney and Olympia Dukakis will return as Mary Ann Singleton and her mysterious landlady Anna Madrigal.

Maupin titled his recent memoir Logical Families. Like Maupin’s novels – and indeed like a significant percentage of all queer literature – his memoir focuses on the “logical” families people find or create when their “bio-logical” families cannot or will not welcome them. Gay choruses, lesbian friendship clusters, LGBT softball leagues, and similar chosen families provide the safe space we all need to thrive.

Watching Shazam! with the son I adopted from the foster system reminded me of the wide variety of non-biological families that can rise from the ashes of tragedy and disappointment – still broken in some ways, yet stronger together. 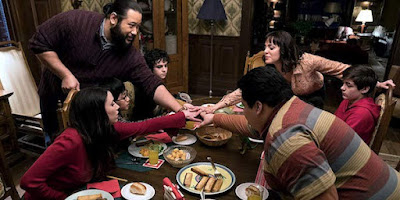 These final two sections are adapted from an essay I published in October 2017, “Sure of You”:

A couple of years ago my son came home from school with a homemade Mother's Day card and a letter addressed to his birth mother. In the letter, Oliver explained that he misses his mom, but he understands she’s been busy dealing with stuff, and he hopes that she’s doing well and can see him again soon. He made me promise to mail the card to her. So I tracked down a current address in another part of the state, added a few extra pictures and a note from me, put some stamps on a bottle, and sent my son’s hopeful message out into the world. 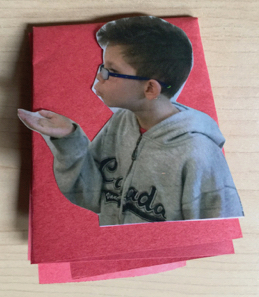 A few weeks later, my parents invited the kids and me across town so they could check all four of us for signs of scurvy. Inspired by signs of incipient maturity, for the first time Grandma assigned Oliver to set the table solo before we all sat down to an excellent meal.

That night as I tucked him in bed, Oliver whined about Grandma’s slave driving. But he knows I will defend my mom no matter what, just as I will defend his birth mother, too. As we lay in the dark a few minutes later, my son quietly asked why his mom hadn’t responded to his Mother’s Day card. [Ed. Note: Oliver’s birth mother still hasn’t responded.]

I told Oliver she probably didn’t feel ready yet, and it might make her sad to see how much he’d grown in the last seven years. I assured him she’s welcome to spend time with him, and reminded him that no one can take him away from our family, even though she will always be his mother. I said she might be afraid he would judge her, or worry that he wouldn’t have enough love left for her. But I told my son he has such a big heart that I know he has enough love for all of us.

Oliver sleeps in the queen-sized guest bed, and ordinarily I have lots of pillows and space to myself when we cuddle at bedtime. But that night he pulled me next to him and tightly held my arms as he fell asleep.

Happy Easter from Bellingham and Vancouver