Adoption Stories: Sure of You

Piglet sidled up to Pooh from behind.
‘Pooh!” he whispered.
‘Yes, Piglet?’
‘Nothing,’ said Piglet, taking Pooh’s paw.
‘I just wanted to be sure of you.’

I have been reduced to writing blog posts on recycled scraps of paper. In pencil. A particularly dull Number 2 pencil. Because my desk has been looted of both my beloved mechanical pencils and my pencil sharpener. And because the girls have commandeered both computers to finish interminable writing assignments for school.

My disparate daughters have the same 7th grade core class, Language Arts/Social Studies, but they were placed in very contrasting sections. I’ve met both Mr. Sturm and Mr. Gillman. One is a hip dude, sleep-deprived and woozy from new fatherhood. The other is a tightly wound ultra-marathoner. Even though both daughters are studying something called “The Middle Ages,” it makes perfect sense that one is writing a thought piece about feudalism interspersed with dialogue transcribed from the CW network’s Riverdale, while the other is weaving/annotating the story of Macbeth in the style of the Bayeux tapestries, but with emojis.

At our house these days, Writing is the new Reading. I have to compete with the girls for computer time. But so far this year the family's best piece of writing was by my son Oliver, in a home-made Mother’s Day card. 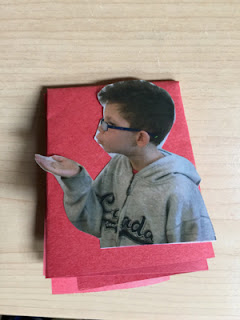 The schools in Bellingham do an excellent job welcoming children from all different kinds of families. The kids’ teachers always remember they need to make at least two Father’s Day cards. Meanwhile, Grandma is the recipient of the Mother’s Day cards and various other objets lovingly created each May.

This year, however, my son came home from school with a card and letter addressed to his birth mother rather than Grandma. In the letter, Oliver explained that he misses his mom, but he understands she’s been busy dealing with stuff, and he hopes that she’s doing well and can see him again soon. He made me promise to mail the card to her. So I tracked down a current address in another part of the state, added a few extra pictures and a note from me, put some stamps on a bottle, and sent my son’s hopeful message out into the world. 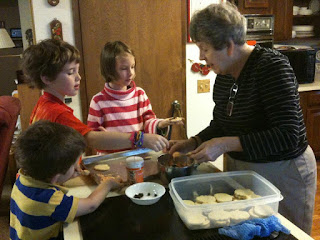 This week my parents invited the kids and me across town so they could check all four of us for signs of scurvy. Grandma observed the girls have grown almost as tall as her. Inspired by signs of incipient maturity, for the first time she assigned Oliver to set the table solo before we all sat down to an excellent meal.

Later that night, as I tucked him in bed, Oliver whined about Grandma’s slave driving. But he knows I will defend my mom no matter what, just as I will defend his birth mother, too. As we lay in the dark a few minutes later, my son quietly asked why his mom hadn’t responded to his Mother’s Day card.

I said she probably didn’t feel ready yet, and it might make her sad to see how much he’d grown in the last seven years. I assured Oliver she’s welcome to spend time with him, and reminded him that no one can take him away from our family, even though she will always be his mother. I said she might be afraid he would judge her, or worry that he wouldn’t have enough love left for her. But I told my son he has such a big heart that I know he has enough love for all of us.

Oliver sleeps in the queen-sized guest bed, and ordinarily I have lots of pillows and space to myself when we cuddle at bedtime. But last night he pulled me next to him and tightly held my arms as he fell asleep.