Get Out and Stay Out

Despite a title that could have come from one of Harvey Milk’s speeches in 1978, this story is not about the closet (except in the sense that all of my stories are about the closet). The title actually refers to a song by Dolly Parton, from the Broadway musical version of 9 to 5.

One way we know things have gotten better is that LGBT folks no longer wait till their thirties and forties to come out. My best friends in Bellingham and Vancouver both happen to be flakey 20something gay millennials with naturally curly hair. The Vancouver curls are a little darker and longer. My children refer to him as “Your friend from Chorus with The Hair.”

The first time my Bellingham friend hitched a ride with me to Vancouver, he stopped by to check out the Vancouver Men’s Chorus rehearsal. Out together at the pub later, more than one catty VMC queen observed “Hmm, we can see Roger has a type – and it runs the gamut from Light Roast to Dark Roast.”

Before leaping to any conclusions, however, you should be aware that my best gay friend in Seattle is a forty-eight-year-old African-American who shaves his head.  [Ed. note: Does that make him Extra Dark Roast?] Shame on you for your mean stereotypes and hasty generalizations.

Unfortunately/fortunately, my Bellingham friend was so impressed by VMC – both during his initial visit to rehearsal and then over his beer with the guys afterwards at Pumpjack – that he came back the next week, auditioned the following Wednesday, and has joined the Chorus. Now I’m doomed to months of leers and bad jokes. I’ve already gotten “I didn’t know your son was old enough to get into a bar.” Twice. Sigh. At least now I have someone to car pool across the border with.

In addition to weekly chorus rehearsals from September to June, Wednesdays are also Show Tune Night in Canada. After I had been singing with VMC for a year, someone finally told me I could have clicked my heels together at any time and gone across the street to a club called XY. There I would find a little piece of Marie’s Crisis, my favorite piano bar in New York.

One night a week, coincidentally (?) right after chorus rehearsal ends, anyone in Vancouver can hear and sing great music live. The audience is a mix of middle-aged show tune fans like myself, of all genders and orientations; a bunch of overconfident drama types from the University of British Columbia and/or local theaters; several chorus divas who don’t even bother making an appearance at Pumpjack any more; and a few drunks who probably were expecting to watch hockey on TV. Everyone loves to sing along, even the drunks. It’s fascinating to see who knows the songs from each era. My own tastes and knowledge are pretty comprehensive, other than a gap from 2005 to 2011 when young kids interfered with theater trips.

Previously, my friends Light Roast and Dark Roast would humor me by accompanying me across the street. (Dark Roast would humour me.) But piano bars are not really their thing. So I’ve given them permission to stay at Pumpjack on Wednesdays with their own tribe. 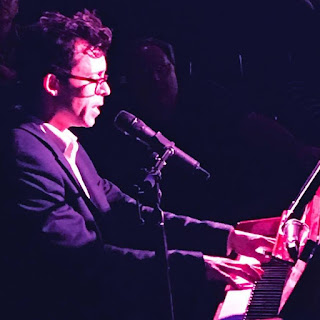 Several talented pianist/singers regularly play on Wednesdays, but the headliner is Kerry O’Donovan, a 30something straight millennial with good hair. Kerry grew up in Vancouver. He makes his living as a musician, stringing together enough local music director and performance gigs to follow his passion. That's a lot easier to do in Canada, with socialized medicine and a real safety net.

Kerry is an exceptionally gifted musician. I haven’t seen him in other settings, but as an habitué of piano bars in New York and elsewhere, I can testify Kerry performs at the very highest level. He could make it anywhere, so we’re lucky he’s right across the border from Bellingham. Some weeks the only reason I go to chorus is to hear Kerry play “Piano Man” and “New York State of Mind” after rehearsal.

Tonight is a special celebration for the second anniversary of Wednesday Show Tune Night, and I’ll be there. Not at Pumpjack. Well, maybe after one beer with the boys. 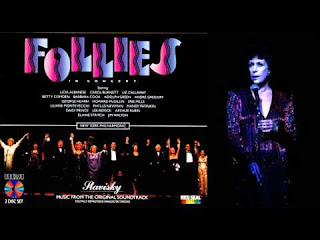 Live shows have the potential for magic no film or recording can conjure. Every night, the audience and the performer experience an unrepeatable moment. Sometimes everything just comes together. For example, in September 1985, Lincoln Center in New York hosted a concert staging of Stephen Sondheim’s Follies. An unparalleled cast of Broadway legends sang some of Sondheim’s best songs. (Barbara Cook sings “Losing My Mind”! Carol Burnett sings “I’m Still Here!” Elaine Stritch rasps her way through “Broadway Baby”!) As James Kirkwood wrote in his liner notes for the album, it was one of those extraordinary events that leave people asking “Where were you on the night of September 6?”

That’s how I felt last week a little after midnight. Without fanfare, Kerry introduced the next song by saying “I love this song so much I asked my friend _____ to come sing it. It’s by Dolly Parton, from 9 to 5.”

I know now that Dolly wrote “Get Out and Stay Out” for the Lily Tomlin character Judy to sing near the end of the show. Judy finally has the courage to say no when her abusive ex-husband wants her back. But I’d never heard the song before. Instead, it unfolded for me as a blonde stranger, accompanied by an amazing pianist, began quietly pouring out her soul. The final chorus was triumphant, ending with “So get out and stay out, I’m taking back my life.” 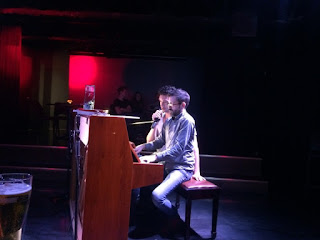 After the audience’s rousing ovation, there was a moment of awed silence. The tallest of the UBC boys said, “Well, I guess we can all go home now.” But Kerry is such a good musician he managed the transition to his next set, and I enjoyed some more songs and my buzz. Note that after almost two years with VMC, this was my first week where someone else was responsible for driving across the border. I really enjoyed more songs, and especially my buzz.

For the first time, I also had a cozy booth to myself, rather than an uncomfortable and exposed stool. After receiving the usual cryptic millennial text followed by radio silence, I assumed Light Roast would eventually come get me after giving Dark Roast a ride home from Pumpjack. So I let the music wash over me, and mused about some writing I'd been working on. The buzz took me into a trance where I would visualize who might slide into the booth next to me ideally – my date from the week before who hadn’t returned my last text? My drama queen daughter? The cute new tenor? The ambiguously gay UBC theater dude who always asks Kerry to play that song I don’t know from Spring Awakening?

Eventually the fantasies got even wilder: my Seattle choir crush from 1992, now bald? My long-dead childhood best friend from Burnaby? Prince Charming?

When I opened my eyes, Light Roast and Dark Roast were both there to take me home. It’s good to have friends.