My children are away on an end-of-school road trip, so I’m alone with the dogs. We’re enjoying the routine of our daily walks together.

Of course, having the kids around wouldn't alter the dog walking situation. I’m the only one who ever walks Bear and Buster. As with anything involving the outdoors, my children respond to the prospect of walking their dogs with wailing and gnashing of teeth.

Obviously if we make it out the door everyone would have a perfectly lovely time. But as the First Law of Parenting says, “pick your battles.”

Besides, I like being the designated dog walker. I enjoy leisurely wandering through Bellingham. It only makes the dogs love me even more. Regular walks are the perfect Guncle move.

The dogs and I will miss the children. Eventually. 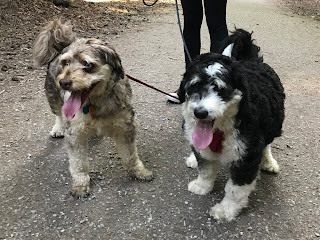 In my previous incarnation as a fabulous gay uncle, I ostentatiously refused to learn how to change a diaper. That’s a task for parents. However, after living with teenagers, I have to warn prospective parents that diaper changing is the least of your worries.

So when I began guncling a pair of Aussiedoodles, I was fine with picking up pooper scooper skills. Of course, if the kids were here I’d make them clean up after their dogs.

In general Bear is mellow, and Buster is the rambunctious one. But not when it comes to bodily functions. Bear insists on raising his leg like a ballerina as we approach each prominent rock, tree, or fire hydrant. Then as soon as we’ve reached the maximum distance from a garbage can and it’s time to poop, everyone for miles knows exactly what Bear is doing. Drama queen.

In contrast, I’ve never seen Buster publicly urinate. For our first few walks, I also thought Buster was constipated. But then I realized he’s a stealth pooper – slowing down to a trot and casually flinging his waste along the wayside, like a redneck in a pickup truck littering on the highway. 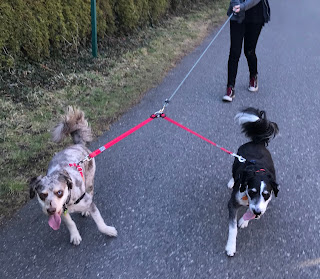 We live at the top of one Bellingham’s many hills. Rather than end every walk with the same sweaty climb, this week the dogs and I have been hopping in the minivan and exploring Bellingham’s amazing network of trails.

Bellingham also has a couple of friendly off-leash parks. However, they’re wasted on Bear and Buster. After tiring themselves out with some initial wind sprints, all they want to do is herd me around the park. I guess that’s their Australian shepherd heritage. Even when they’re back on the double leash, Buster frequently looks back to make sure I’m still holding the other end.

Bear and Buster also think they’re hunting dogs. They’re constantly distracted by mysterious smells. But as I was telling the dogs on one of our walks last week, no matter how good they taste or smell, Twinkies are bad for you. 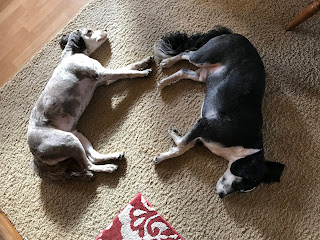 When the dogs are too muddy to ride in the minivan, but we’re not in the mood for a steep hike up the hill, we have the choice among three gentle hilltop routes: forest trails in the arboretum; shopping for Victorian mansions on South Hill; or walking across campus to the park.

If this were a democracy, Bear and Buster would always pick the campus route. They’re social animals, preferring people to nature. Conversely, not everyone likes dogs, but most people like these dogs. Folks are always asking about their breed, or admiring Bear’s mismatched husky eyes. Strangers want to pet them, and Bear and Buster will always oblige. (They’re the worse guard dogs.)

Yesterday a dad suggested I get a skateboard and let them pull me. Today on the boardwalk an elderly lady exclaimed “They’re the happiest ones out here!” But my favorite endorsement this week was the little boy who excitedly told his grandpa, “I want 100 dogs like them, and one Dalmatian!”

The best thing about walking Bear and Buster is that everyone we encounter is smiling at us. Yes, I know they’re not smiling at me. But they’re smiling at us – and at everyone else for a little while. Surely that makes the world a slightly better place. 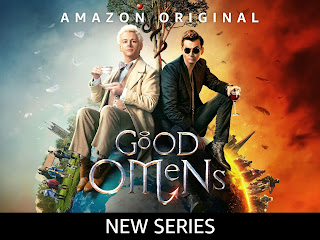 Have you watched Amazon Prime’s new adaption of Good Omens? The 1990 novel, by Neil Gaiman and Terry Pratchett, is a family favorite. The TV series is fun and true to the book, with David Tennant playing the ambivalent demon Crowley, and Michael Shannon playing the fussy angel Aziraphale.

Good Omens is the story of how the Apocalypse gets derailed when the Spawn of Satan is accidentally switched at birth. Instead of being raised surrounded by demonic power, he grows up in an idyllic English village.

In his life, there are no moral greys, and he feels obliged to tell the world about the difference between right and wrong. His chosen forum is “the letter column of the Tadfield Advertiser,” which can no longer print all the letters he sends. After “composing a lengthy mental letter on the failings of the youth today,” he has an ambition of getting published in The Times.

While out walking his wife’s poodle Shutzi one fateful night, Mr. Tyler runs into demons, angels, witch-hunters, and all four Horsemen of the Apocalypse, each asking for directions to Armageddon. An increasingly disgruntled R.P. Tyler mentally composes increasingly indignant letters to the editor. 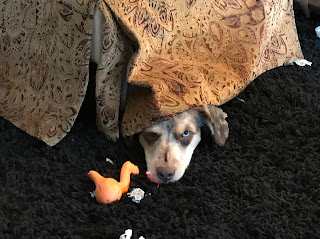 As Pavlov would have predicted, the dogs now begin demanding a walk as soon as they finish their breakfast. I’ve had to be firm with them. I explained that we’re not allowed to go outside until I finish my work. (With the kids gone, I’ve been talking to Bear and Buster; it’s nice to be around someone who listens to me for a change.)

As we begin our walks, I’m often still stewing over some lawyerly letter, or another futile job application, or a Machiavellian public records request. I’ve turned into cranky R.P. Tyler from Good Omens as he walks Shutzi – writing letters in my head in response to each indignation.

Fortunately, Bear and Buster refuse to put up with lawyer talk. We check out the sailboats, and smell things, and talk to the friendly people along the trail. Eventually cheerful essays write themselves in my head as we walk. Like this one. 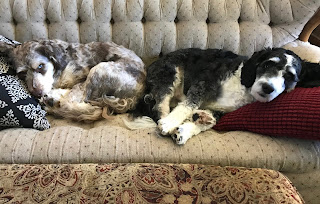 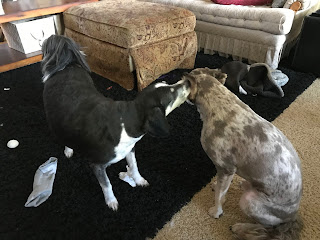 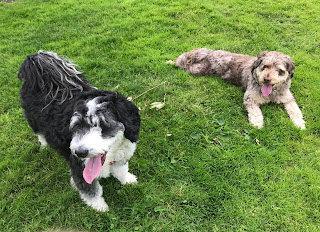 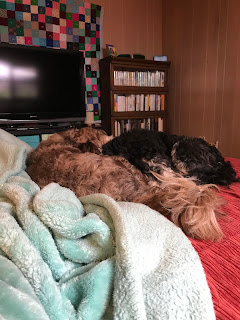 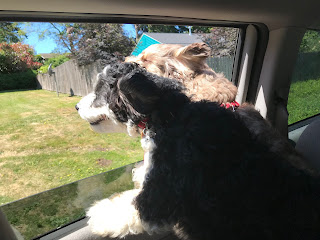 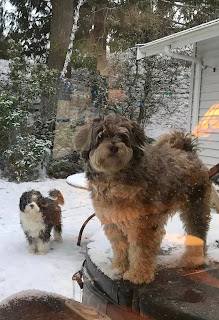 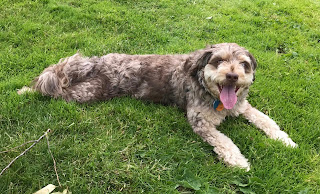 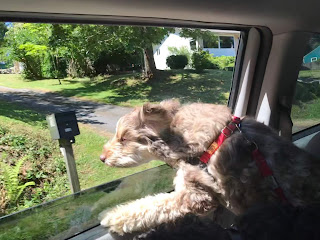