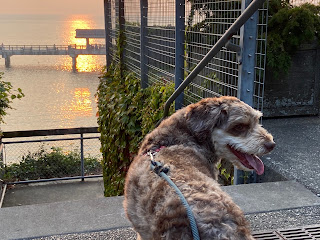 I was prepared for the extra long Q-tip snaking up my nose. However, no one told me a Covid-19 test involves repeatedly sneezing afterwards. 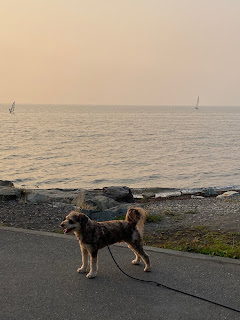 I’ve lived with chronic ear, nose, and throat problems ever since I was a teenager. Once or twice a year, allergies and stress converge for a bout of sore throat and congestion. The first time it happened I was in high school. In a cosmic joke that recurs every few years, I lost my voice for several weeks, even after the more painful symptoms subsided. I was performing in some show at Palace Playhouse at the time. The director’s advice to the rest of the cast: “If everyone talks quietly when Roger’s on stage, maybe the audience won’t notice.”

In a bad year, I’ll get a high temperature that signals bacterial infection. More than once I’ve been told if I’d waited another day to come in for antibiotics I’d already be in the hospital, or dead. Fortunately, Bellingham has an excellent walk-in urgent care clinic. Nowadays when I recognize the nasal warning signs and can’t get an appointment with my regular physician, Dr. Heuristic, I promptly pay a visit to Dr. Practical at her clinic.

This year I didn’t have a fever to accompany my sore throat, nasal congestion, and cough. So I assumed I had the usual malaise, and I’d just have to wait in misery while the crud ran its multi-week course.

On the other hand, the same symptoms could also point to Covid-19. Right after the kids flew back from the Midwest, they went in for regular wellness visits. Their pediatrician said if any of them had Covid-like symptoms I should call her office and she’d order a test. But when I called my grownup doctor’s office, they told me if I wanted a Covid test I had to go to the walk-in clinic and be triaged in their parking lot first.

So last week I had I nice drive-through chat with Dr. Practical about our kids’ Zoom high school experiences, picked up a prophylactic antibiotic prescription, then drove down the street to another parking lot where a nurse stuck a Q-tip up my nose. 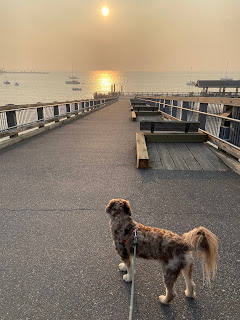 This summer as Bear and I went on longer and longer treks around Bellingham, I recognized what an important role our walks play in my thinking, writing, and general mental and physical health. Among other benefits, I have the opportunity to try out new material on dog owners, or at least on dogs. Or dog. It turns out Bear is a marvelous conversationalist.

As soon as we arrived home from each long Real Walk, I now transcribe our Bear Dialogues. Here are some recent examples:

“I told you we were walking back to the car, not the house. Ha! Who’s the Guide Dog now?”

“Only one of us can be the most passive aggressive, and you win.”

[At PAWS, Bellingham’s bar for dogs and dog owners]  “Buster hasn’t texted, so I guess we can order another cider and stay a while.”

[Also at PAWS] “Poor Buster. At least this time we fed him before we left.”

“Can’t you find a park where the benches have back support?”

“What’s the collective noun for a bunch of cute nerds?”

“You’re just as bad as my children.”

“Is my mother paying you to scare away twentysomething nerds?”

“We’re going to the off-leash park, not the dog bar. We can’t have alcohol.”

“If we keep having such a good Friday every week you’ll have to vote for Trump.” 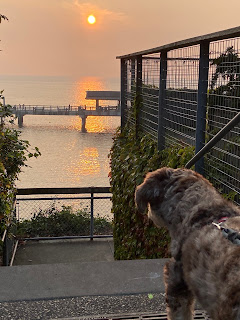 That final line of Bear Dialogue, which I posted to Facebook last Friday, tempted fate a little too much.

As expected, my Covid-19 test came back negative, which was the real point of my visit to Dr. Practical. Unfortunately, her antibiotics didn’t make a difference, other than upsetting my stomach. Instead, as I suspected, this year I have the lingering non-bacterial version of la grippe. My nose finally feels better, but as usual I’m now hoarse. And the congestion has decided to settle in my chest for a while.

Meanwhile, the horrifying forest fires across the West are sending clouds of toxic smoke our way. Everyone who is already staying indoors is supposed to stay indoors even more. Buster, Rosalind, and Oliver are thrilled to have yet another excuse to avoid exercise. Eleanor is compensating by doing twice as much indoor and online teenager stuff. And Bear and I are frustrated and irritable.

On Saturday evening, I was exhausted from work and congestion. I wasn’t up for a Walk or even a mere “walk.” But after being spoiled by months of regular exercise, Bear obviously needed a Real Walk. Right Now.

Desperation began to alter Bear’s personality. Abandoning his usual aloof and cat-like passive aggression, Bear tried cuddling with everyone. Even Eleanor. When we filled the dogs’ supper bowls, the normally anorexic Bear ate first for the first time ever. Out of Buster’s bowl. Buster frantically wagged his tail nearby in terror.

Then Bear sat on my chest and batted his blue and brown eyes. I couldn’t stand it any more. I crawled out of bed, changed out of my pajamas, and got out the leash. Bear bounded toward the door. Buster remained curled on the floor in the living room, rolling his eyes at us like we’re both crazy.

Last month in “Just Breathe” I wrote about how my PTSD-amplified trichotillomania makes wearing a mask feel like I’m being waterboarded. I can handle a few minutes in the post office and grocery store, but that’s about it. Nevertheless, relying heavily on mouth breathing, on Saturday night Bear and I made it from the end of the Boardwalk to Boulevard Park and back to the car before I had to rip off the mask and gasp. 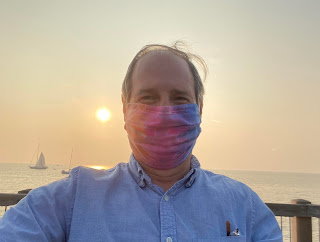 Air quality throughout the Pacific Northwest keeps getting even worse. After the briefest of “walks” with Buster yesterday morning, Bear and I were trapped inside the house with the children all day.

Happily, after dinner a surprise shower finally cleared the air a little. As soon as the rain stopped, Buster and the children kicked us out of the house. Bear and I enjoyed a delightfully mask-free Real Walk across the hill to our favourite Victorian mansion.

When I posted my first excerpt from the Bear Dialogues to Facebook a few weeks ago, here’s what it said:

Tonight’s New Yorker cartoon caption, overheard in a dark wood nearby: “You said you’re the ‘Guide Dog.’ Does no one here have night vision? Shouldn’t that fact have come up on an earlier date?”

We’ve learned our lesson. Last night Bear and I stayed on lighted sidewalks and avoided the woods. Instead, here’s the Bear Dialogue you would have overheard on South Hill last night:

“We’re not going to get run over. Half our hair and both your legs are blindingly white.”

“You really don’t have any sense of smell, do you?”

“Didn’t we leave Buster at home? Who’s that huffing and puffing, you or me?” 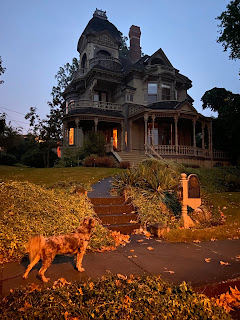