The Secret Policemen's Other Ball 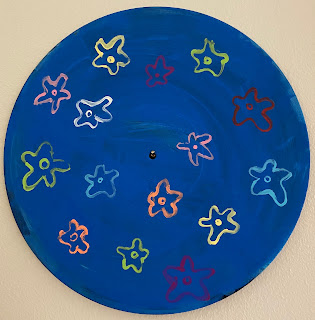 A couple of months ago, back in an innocent time before international coronavirus quarantines, the dogs and I were trapped at home with my children for a week of “snow days.” For one of their mandatory art projects, the kids painted designs on a stack of old vinyl records we bought at Value Village.

With the recent improvements in my mental health, I can finally share my deepest, darkest secrets with my family and readers. Here’s a gem, now hidden under my daughter’s pastel flowers and blue paint:

The very first concert I ever attended was at the Marriott Center in Provo, Utah, on September 17, 1981. I’d arrived as a clueless freshman at Brigham Young University three weeks before. 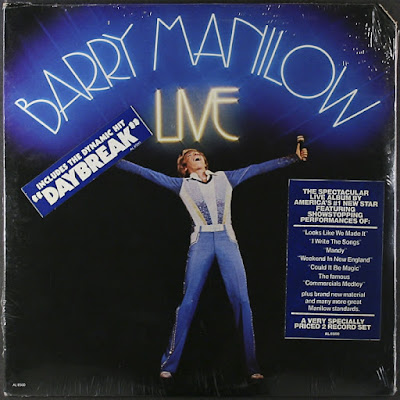 During my time at BYU, I was confused about my own sexual orientation. I was also oblivious to the fact that most of my college friends were actually gay, too. And the fact that Barry Manilow is gay.

Several years later, someone who had been part of BYU’s secret gay underground told me a story about the Barry Manilow concert. Apparently afterwards an unmarked car full of BYU security officers followed Manilow and his posse forty-five mile north to the Sun Tavern, Salt Lake City’s gay bar.

Perhaps it’s just a 1980s urban myth. But based on what I know about Mormons, institutional homophobia, BYU, its Orwellian “Honor Code Office,” and campus police, the story is probably true. 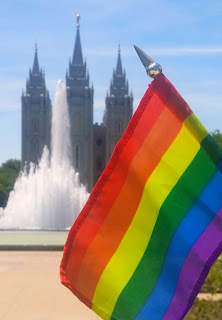 Like too many other Mormon youths, thirty years ago I was the victim of relentless emotional abuse from a pervasively homophobic community. The Mormon Church’s authoritarian message denied the very existence of LGBT people. Those unhealed wounds reopened thirty years later when I again experienced “unrighteous dominion,” this time at the hands of ignorant employers, unethical lawyers, and dishonest bureaucrats.

Ironically, one of the signs that helped my healthcare providers quickly identify the nature of the trauma underlying my PTSD symptoms again involved the Mormon Church. On November 5, 2015, the Church of Jesus Christ of Latter-day Saints confirmed rumors that its Prophet and Apostles had adopted a new policy forbidding children living in same-sex households from being blessed or baptized.

This is what I wrote on Facebook that day:

To my Mormon friends and family – in the last thirty-five years I have endured and observed a horrifying litany of abuse by the LDS Church against LGBT individuals, from electroshock therapy, to suicides, to election fraud, to ecclesiastical abuse. But this step may be the most profoundly evil and unchristian act I can imagine – punishing children for the “sins” of their fathers.

According to the Gospel of Matthew, when Jesus’s disciples blocked some little children from coming to hear him, Jesus said “Whoso shall offend one of these little ones which believe in me, it were better for him that a millstone were hanged about his neck, and that he were drowned in the depth of the sea.”

As the parent of two ten-year-olds and a seven-year-old, I am shocked to hear that a Christian sect would withhold the purportedly essential ordinance of baptism out of pique. I do not want my name associated in any way with an organization that would rather children go to hell than have gay parents. This is far beyond being sore losers in the legal and culture wars. Indeed, “collective punishment” is considered a war crime under the Geneva Convention. I can no longer defend Mormons from the accusation that they aren't Christians – because I can't imagine anyone who would defy Christ’s actual teachings and perpetrate such evil.

Here are a couple of other Facebook examples of my unfiltered PTSD rage from November 2015.

Five years later, Church bureaucrats finally watered down their anti-child policy, and replaced some of the leadership handbook’s most virulently homophobic language with facially neutral statements. Separate bureaucrats at the church-owned Brigham University immediately updated the university’s strict Honor Code to remove its section titled “Homosexual Behavior,” which previously banned students from “all forms of physical intimacy between members of the same sex.”

Some of BYU’s LGBTQ students and alumni rejoiced. Encouraged by the new policy, many current students came out of the closet. However, within days the Church forced BYU to retract its hopeful message.

This clumsy flip flop should come as no surprise. Years before the Mormon Church finally ended its ban on black priests in 1978, students and administrators at BYU already wearied of their role as one of academia’s most notoriously racist punching bags. Similarly, everyone associated with the nation’s largest private college would obviously prefer to avoid well-founded public accusations of anti-LGBT discrimination. Nevertheless, even in 2020, the university community is powerless to escape from ancient prejudices held by the Church’s gerontocratic leadership.

Gay Mormon filmmaker Kendell Wilcox published a commentary in the  Salt Lake Tribune last week about the Church and university’s “horribly mismanaged rollout of a sanitized-for-public-relations-and-correlation-purposes draconian policy that opened the door for misinterpretation and misplaced hopes”:

[U]ltimately, this whole mess is due to the persistent and erroneous belief that the “Law of Chastity is applied the same way for all Mormons - straight and gay.” Or as President Dallin Oaks put it in April 2019: “Immoral conduct in heterosexual and homosexual relationships will be treated in the same way.” Church and BYU leaders continue to believe that this legalistic and vague wording will afford them the appearance of fairness and placate their critics.

But the Law of Chastity has not been, and may never be, applied the same way to straight and gay members. Straight members are encouraged to pursue marriage by dating (and all the things that dating people do) while gay members are told to deny themselves of all of this. In other words, per Oaks’ statement, in the church’s eyes all “conduct” in a homosexual relationship is considered “immoral conduct.” There is no moral conduct in a homosexual relationship.

Once again, LGBT Mormons and their families are left with “uproar and outrage and heartache.” 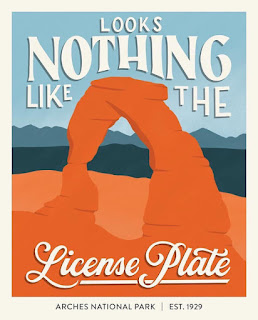 The First Amendment protects freedom of religion. As with earlier generations who used the Bible and Book of Mormon to defend slavery and then segregation, Mormon leaders are welcome to worship a God of Hate. Of course, the First Amendment also guarantees the right of other people of faith, and outspoken respecters of human dignity, to call out the current leadership of the Mormon Church for their lack of Christian charity.

However, BYU’s recent anti-gay flip flop puts the university at a very visible crossroads. Just as BYU’s prior racism resulted in NCAA boycotts in the 1970s, academic accreditors must carefully examine the university’s values today.

More importantly, BYU and the Mormon Church have an obligation to protect the naïve LGBTQ students who publicly came out in response to BYU’s deceptive welcome. There can be no witch hunts. No retaliation by the Honor Code Office. No electroshock or conversion therapy. No one placed at risk of losing their expensive educational investment. No demands for lists of other “perverts.” No entrapment by campus police. And no searches of the parking lots at Salt Lake's gay bars.

Instead, each member of the BYU community must ensure the safety of these students while they remain at BYU, and their safe passage to welcoming institutions and communities if they choose. When every member of this newest generation of LGBTQ+ Mormon abuse victims finally escapes from Provo, I hope they – and you – will join me in shunning Brigham Young University. At least until the university becomes worthy of our respect. 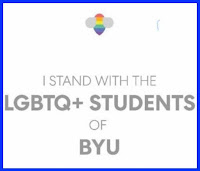