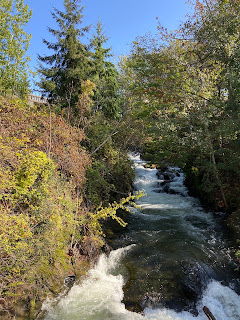 Whatcom Creek flows four miles from Lake Whatcom to Bellingham Bay. This summer Bear and I tried walking the length of the creek.

Our trek began easily at the dam in Bloedel-Donovan Park, near my parents’ house on top of Alabama Hill. Together with the creek itself, hikers then drop 300 feet in elevation along the network of trails through Whatcom Falls Park. You’ll observe energetic young salmon leaping at the fish hatchery, and foolish young humans diving at the cliff pools. 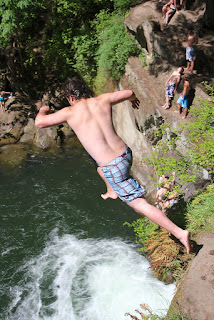 The trail peters out after you pass the cemetery and leave Whatcom Falls Park. There’s a stretch between the car dealerships and the freeway where blackberries would scratch you to death if you insisted on walking next to Whatcom Creek. Bear and I decided to fast forward instead.

The trail markers begin again as you approach downtown, although the path merely connects a series of parking lots. The creek, park, and trail finally converge again across the street from Bellingham High School. The greenery has mostly recovered from the rupture of the Olympic Pipeline in June 1999, when 277,000 gallons of gasoline poured into the creek then exploded.

The last stretch of creek and trail meanders behind City Hall and through Maritime Heritage Park to Bellingham’s waterfront/Superfund cleanup site. This is the sketchy part of downtown, with numerous primitive campsites intended for homeless people and substance abuse. Bear felt safer in the blackberry brambles. 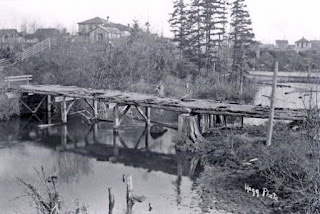 Whatcom Creek’s last cascade pours into the salt water of Bellingham Bay at the site of the city’s original saw mill. It’s also the site of the first bridge across the creek.

Before white settlers and lumberjacks arrived, Coast Salish people from the Lummi tribe thrived in the narrow strip between the bay and the old growth rain forest. In 1856, the United States decided to build a fort to “protect” the settlers from Russians, Brits, and natives. The Army sent Captain George Pickett to supervise construction of the fort and a military road, including a wooden bridge across Whatcom Creek.

Captain Pickett also built a frame house on the hill above the creek. Pickett House is the oldest house in Bellingham, and the oldest house on its original foundation in the entire Pacific Northwest. Pickett married a local Native American woman named Morning Mist. Their son Jimmy Pickett was born in the house in 1857, the same year as the original bridge’s completion. Jimmy worked as a journalist and artist before dying in Portland in 1889. 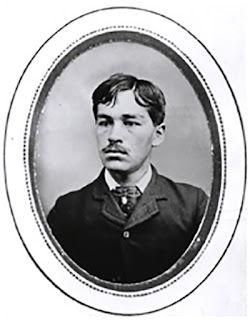 The current cement bridge at the mouth of Whatcom Creek was built in 1920, just like the Peace Arch on the Canadian border twenty miles up the road. You can see a sliver of the century-old bridge in the upper left corner of the photo at the top of this essay.

George Pickett began his military career by graduating dead last in his class at West Point. Just like George Custer. A year after graduation, Pickett served as a lieutenant in the Mexican-American War. He was promoted to captain for heroically carrying the battalion flag to the roof of the enemy fortress in the Battle of Chapultepec.

Captain Pickett’s next assignment after building a fort, house, bridge, and biracial son in Bellingham was to command American forces on nearby San Juan Island during the 1859 “Pig War” against the Hudson’s Bay Company and the Royal Navy. The two nations went to war because an American settler shot a British pig. (And because they couldn’t agree where to draw the international border between the mainland and Vancouver Island.)

This time Pickett delegated responsibility for building the fort to Lieutenant Henry Robert, who had recently graduated fourth in his West Point class. Roberts’ staunch abolitionist father was the first president of Morehouse College. After building the American fort on San Juan Island, Lieutenant Roberts went on to serve as a Union general in the Army Corps of Engineers. And to write Robert’s Rules of Order.

During the Pig War hot-headed local military leaders, including Pickett, wanted to escalate the hostilities on San Juan Island into a full-blown international conflict. Which horrified their commanders when news of the pig incident finally reached Washington and London. Fortunately cooler heads prevailed. After twelve years of begrudging joint British-American occupation, an arbitration commission under the Kaiser’s leadership drew the international boundary in Haro Strait between the Canadian Gulf Islands and the American San Juan Islands. 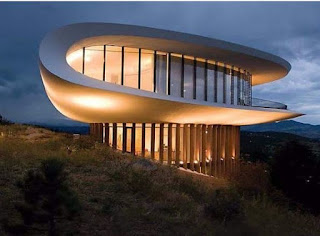 In my Thursday blog essay last week, I wrote about the pop standard “Everything Happens to Me,” which Frank Sinatra introduced in 1940. My favorite versions are by Chet Baker and by The Whiffenpoofs of 1990.

While researching the history of the song, I discovered that Timothée Chalamet recently performed “Everything Happens to Me” in the 2019 film A Rainy Day in New York. Chalamet was adorable as an openly gay youth in Call Me By Your Name, and then as the obviously gay character “Laurie” in Greta Gerwig’s remake of Little Women. I’m sure Chalamet would be adorable singing “Everything Happens to Me.” However, A Rainy Day in New York is Woody Allen’s latest film. So I couldn’t even watch Chalamet’s YouTube clip.

I don’t have enough information to know what happened thirty years ago when the Mia Farrow and Woody Allen households faced each other in courtrooms and across Central Park. It appears that everyone involved sincerely remembers and believes his or her own story, even though their memories conflict.

Meanwhile, a cascade of recent revelations about sexism and privilege has nudged society forward. With enough asterisks I could probably watch Woody Allen’s early funny work, or his brilliant middle films. But not the new stuff. If Me Too can’t change a man, it should change his art. Or at least our response to his art. 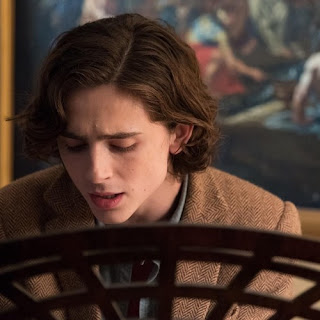 When the Civil War broke out, Virginia-native George Pickett was stationed on San Juan Island. Pickett immediately sailed across the bay to Bellingham for the purpose of resigning his commission. His commanders told Pickett he had to resign in person at Army headquarters. So Captain Pickett sailed to Tacoma, caught a steam ship to Panama, trekked across the isthmus, sailed to Virginia, then rode to Washington D.C. to finally resign from the Union Army in June 1861.

Pickett had already been sworn in as a major in the Confederate Army three months earlier. During the Civil War he rose to the rank of brigadier general. Despite his various Pacific Northwest adventures, history only remembers George Pickett for “Pickett’s Charge” on July 3, 1863 at Gettysburg – the bloodiest clash at the bloodiest battle in the bloodiest war in American history. 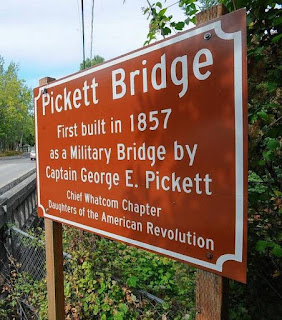 The current bridge at the mouth of Whatcom Creek was named “Pickett Bridge” when it was built a century ago. The Pickett House on the hill above Whatcom Creek is now a museum, with extensive written material that tells the story of early Bellingham and George Pickett, warts and all.

After white supremacists marched in Charlottesville in 2017, the Bellingham City Council voted to remove the modern sign next to the bridge over Whatcom Creek. The sign was a monument to a monument to a man. The man himself was complicated and interesting. But we don’t need a plaque, a bridge, or a road sign to tell George Pickett’s nineteenth-century story. Or to tell our shared story today. 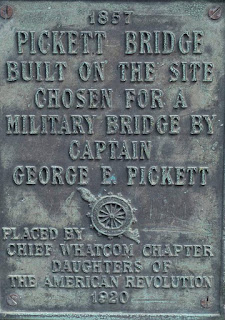