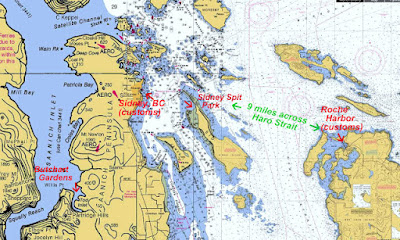 During the 1990s, my friend Jim regularly invited me on his spring sailing trip from Seattle north to the San Juan and Gulf Islands. We would arrive in Victoria’s Inner Harbour in time to watch our more intense sailor buddies compete in the annual Swiftsure Yacht Race. After a fun weekend in Victoria fraternizing with friendly Canadians, our group would sail off to explore otherwise inaccessible gems like Wallace, Prevost, Sucia, and Patos Islands, before returning home to the drudgery of legal practice.

One of my favourite spots was Sidney Spit, just across the border in the Gulf Islands. We tied the Stella Maris to a mooring buoy in the bay, opened some refreshing beverages, and relaxed at the centre of the Salish Sea.

From Sidney Spit you have a stunning view of four major mountain ranges:  the Olympics to the south, Vancouver Island to the west, the B.C. Coast Range to the north, and the Cascades to the east.

As the crow flies, Sidney Spit is about thirty miles due west of Bellingham. On a clear day, the dogs and I can see the same four mountain ranges on our morning walk. 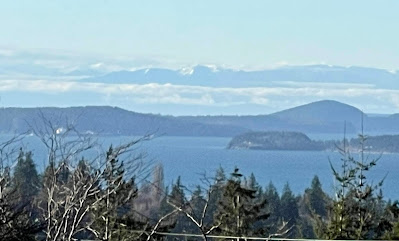 Last Friday morning Bear, Buster, and I began the walk in our own backyard on Bellingham’s South Hill. To the southwest we could see the Olympic Mountains looming in the distance beyond the San Juan Islands. 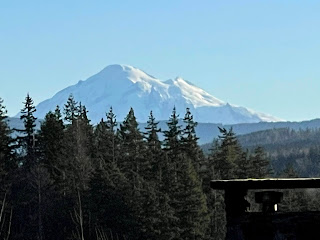 Crossing the street, from the neighbors’ driveway we saw the Cascade Range and Mount Baker to the east. As with so many other Northwest landmarks, Captain George Vancouver named the mountain during his voyages on H.M.S. Discovery. Joseph Baker, Vancouver’s third lieutenant, sighted the mountain on April 30, 1792. The native name for the mountain is “Kulshan,” which also refers to a local brewery and a middle school.

Mount Baker is the third highest peak in Washington, the second most active volcano, and the largest glacier field. Mount Baker ski area holds the world record for snowfall, with a total of 95 feet falling during the 1999 season. Like Mount Rainier and Mount Saint Helens, Mount Baker is part of the Cascade Volcanic Arc which extends from Mount Shasta in California to northern British Columbia.

“Coast Range” and “Cascades” are actually names for the same set of mountains in two different countries. Geographers drew their boundary not at the 49th parallel but rather at the Frasier River, thirty miles north of the border. On our walks the dogs and I can see the Coast Range from the boardwalk at the foot of South Hill. 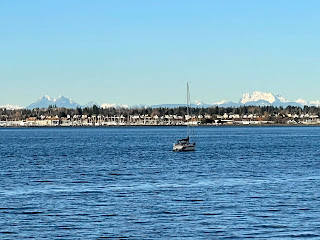 The fourth mountain range we saw on our morning walk is the spine of Vancouver Island in the distance to the west. 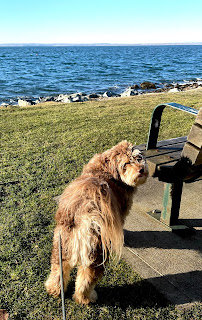 It was easier for Bear and me to see Vancouver Island during our sunset walk Friday evening: 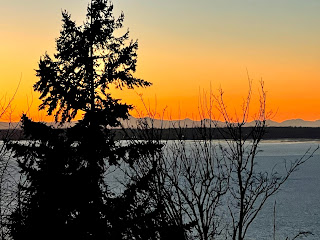 You can’t actually see any mountains from our house itself – only from the top corner of the backyard. In contrast, at our previous rental house I could see a mountain in Canada with a distinctive double peak as I brushed my teeth in the master bathroom. It’s part of the Coast Range.

A couple years ago in “Photographic Memories,” I wrote about trying to identify the jagged mountain due north of Bellingham. Here’s how I drew it from memory: 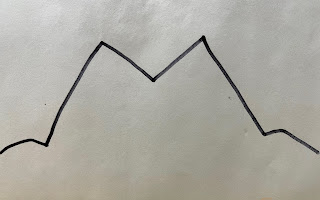 Now that I have a fancy new iPhone with a telephoto lens, I can zero in on distant vistas. I figured out the name of the double-peaked mountain to the north is Golden Ears. 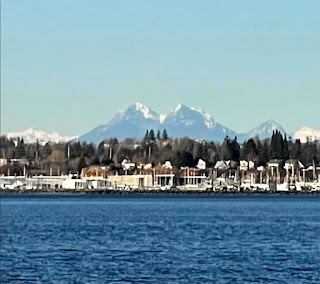 The city of Vancouver is forty miles northwest of Bellingham. Even without the zoom lens I can see the mountains of the Coast Range that tower above Vancouver.

In the distance beyond Bellingham harbor you can see the familiar pair of snowcapped “Lions” above Capilano Gorge. Even though I can’t see Stanley Park, I know it’s there below the guardian peaks that give Lions’ Gate Bridge its name: 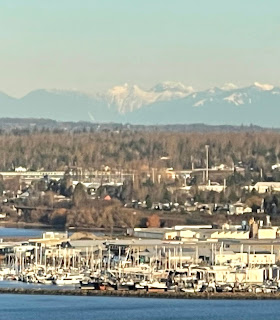 In the same picture you can see groomed ski slopes to the right of the Lions. When I was growing up in suburban Vancouver I saw the same white clearings from my bedroom window.

Here’s how I drew my childhood view in “Photographic Memories”: 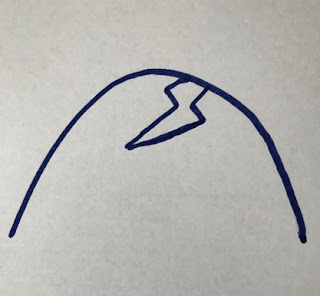 At night, folks in Bellingham can see the ski slopes lit up: 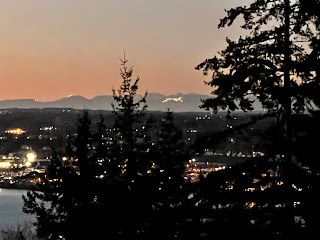 It’s like a beacon from the Promised Land – reminding me that the Canada/US border has been closed by pandemic for the last 320 days. 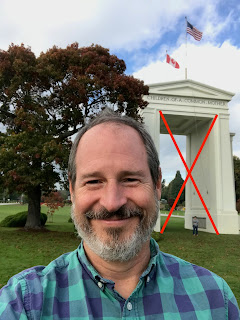 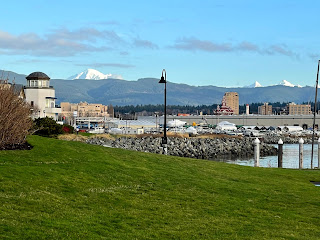 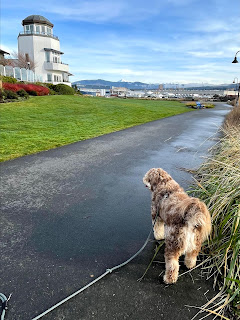 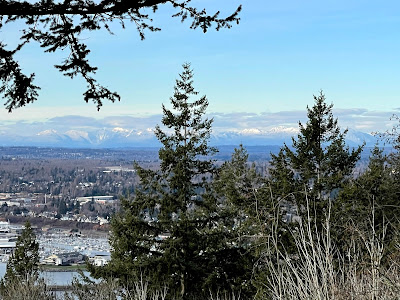 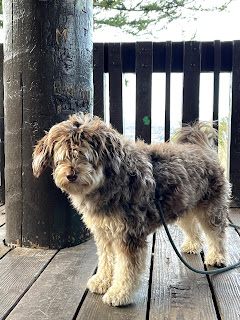 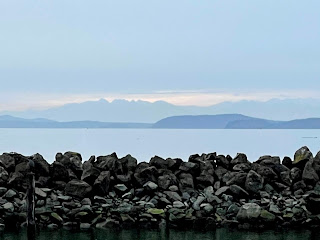 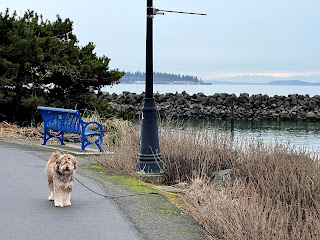 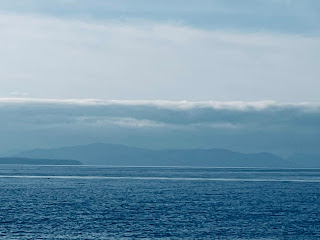 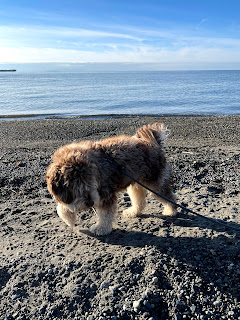 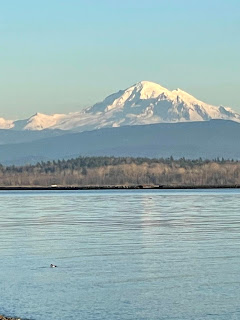 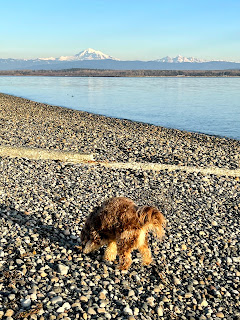 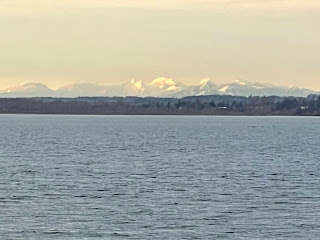 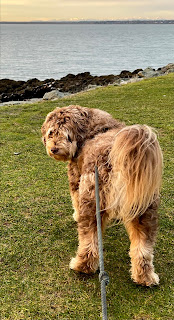