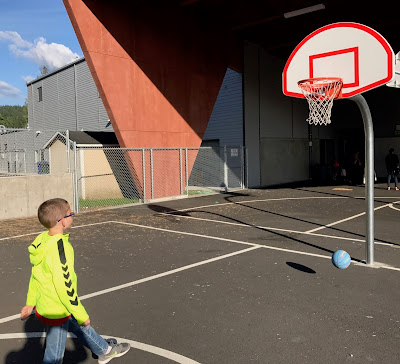 Last year I wrote about the first topic in “Puberty So Far”:

Recently I signed the girls up for an excellent two-part “For Girls Only” sex education class. The first Monday night we learned about what girls experience in puberty. I was the only male in a room with 50 preteen girls, their mothers, aunts, and grandmothers. The creator of the course, a nurse who wrote the book Will Puberty Last My Whole Life?, was amazing. She candidly answered all kinds of awkward questions. I never realized there was so much to know about tampons. Ask me about her great Macgyver tips for menstrual emergencies.

The next week was much more awkward. The topics included “What boys experience in puberty,” and “Sexuality and sexual reproduction.” The instructor left her diagram of an erect penis displayed on an easel at the front of the room while she answered various questions about dating. For an entire hour. I silently sat together with fifty tween girls, their mothers, aunts, and grandmothers, as we pretended I have the crotch of a Ken doll.

My conclusion last year: “Puberty is indeed horrible. We're already in the throes of hormonal craziness, and the random Dr-Jekyl-and-Ms-Hyde mood swings are killing me.”

This year I can report female hormones aren’t so bad after all. Because only half my daughters are unbearable drama queens. 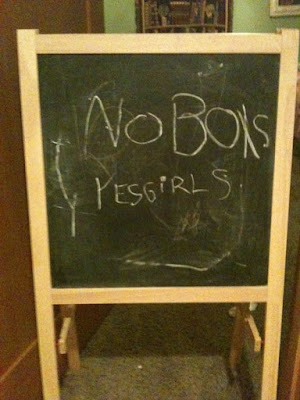 I am not a video game person. In my youth, the primitive arcade games were limited to Asteroids and PacMan. By the time the graphics got fun, it was too late for me to join in.

The closest I’ve gotten to writing about video gaming was in “Moral Alignment,” when I made fun of my middle-aged friends who still play Dungeons & Dragons. (And that doesn’t really count, because they only use dice and their imaginations.)

However, two thirds of my children love to play various online multi-player games. This year I’ve vowed to join my kids in their brave new virtual world. So far I’ve made it as far as a matinee of Ready Player One. But I’ll let you know when they reveal their video gaming secrets to their old man. 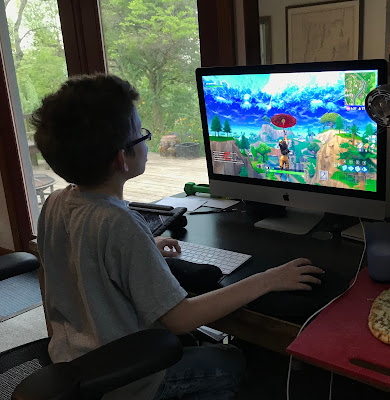 My lifetime exposure to organized sports, particularly team athletics, has been tangential at best. For example, for several years I was the attorney for the Gay Softball World Series, the oldest and largest annual LGBT sporting event. When I finally attended a softball game, I was amazed to learn each team has ten rather than nine players. (Did you know that?)

My own schoolboy days were stuffed with theater, debate, band, repression, etc., rather than with chasing balls or girls. Last year I got my first real glimpse at the alternate reality I missed when I dutifully attended each of my daughter’s sixth grade gymnastics meets. I would sit on an uncomfortable chair for two tedious hours so I could watch 30 seconds of her individual tumbling, then eventually 90 seconds of a team dance routine.

This year Eleanor added volleyball to her numerous extracurricular activities. Frankly volleyball is much more exciting than gymnastics. Each week I joined the other rabid parents cheering on the seventh-grade girls.

Meanwhile, my diminutive fourth-grade son insists he’s going to play “tackle football” as soon as he gets to middle school. Fortunately, I still have one daughter with a charming and relatable indifference to sports. 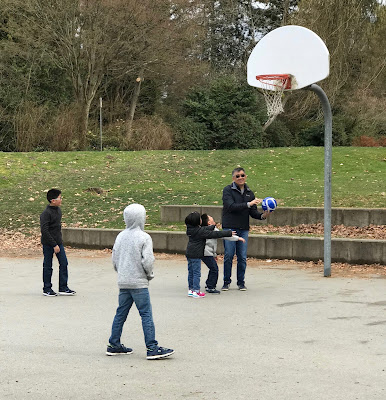 Our family photo album features five decades of pictures from Second Beach in Vancouver. This spring break my kids specifically requested we go there, although they call it “the place in Stanley Park with the cool swings and the fire truck.” Second beach also features a salt-water pool, gymnastics apparatus, and a basketball court that used to have painted traffic lines where I learned to “drive.”

Oliver loves basketball. He will play with anyone. Even his sisters. Last month at Stanley Park, Oliver was frustrated when the language barrier prevented him from joining the Chinese family playing on the basketball court. I can’t believe a have a child who will walk up and talk to complete strangers, let alone ask them to play basketball with him. 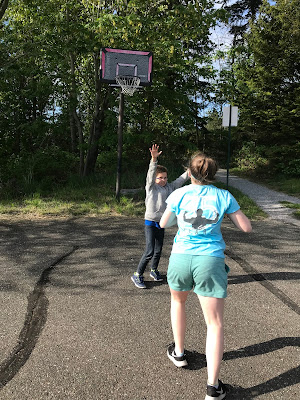 For the last thirty-seven years, my parents have lived at the end of a road where Bellingham meets the forest. Many years ago, my father put up a regulation-sized basketball backboard in the cul-de-sac for my brothers and the neighborhood kids. If the sun is shining when we go over to grandma’s for dinner, the kids and I head out to shoot some hoops before the meal.

When a very young Oliver first dragged me outside to play soccer, I put down my book and hid my sigh. As with every strange new facet of parenthood, I resolved to embrace the whole catastrophe.

I was pleasantly surprised to discover the immense natural advantage any adult enjoys when facing off against a competitor who stands under four feet tall. I bamboozled my son for years. Sadly, this edge has faded over time. I can still outrun the kids at any distance between 10 feet and 10 miles. But they’ve figured out I’m not very coordinated. And it’s gotten harder to get away with making up the rules to popular American sports.

Nowadays my children patronize my lack of athletic prowess. Nevertheless, I occasionally win shorter games on the basketball court at grandma’s house, as long as play focuses on height and wiles rather than skill.

What I haven’t told my son is that until we played together last summer, I’d never successfully shot a basketball through a regulation hoop. I couldn’t even try – because it would trigger what I now recognize as PTSD-twisted memories of being bullied in junior high physical education class in Utah forty years ago. 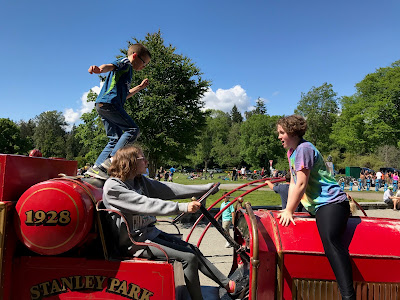