Adoption Stories: How Eleanor Got Her Middle Name 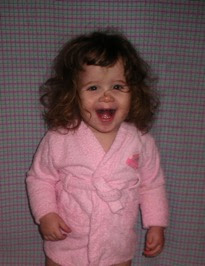 After my ex and I agreed on our newborn daughter's first name, we chose “Eileen” as her middle name. She's named after Grandma. When you combine "Eileen" with “Eleanor” and “Leishman,” my daughter’s signature becomes a dizzying spiral of l’s and e’s.

“Eileen” is my mother’s middle name. And, in one of those strange coincidences that will not surprise regular readers of this blog, “Eileen” also happens to be my sainted ex-mother-in-law Judy’s middle name.

Instead, let’s approach Eleanor’s middle name as a matter of statistics. What are the odds of having two non-Irish grandmothers named Eileen?

The Social Security Administration doesn’t publish data about middle names, but as every expectant parent knows, SSA maintains a marvelous first name database going back to 1880. The year Grandma Judy was born, “Judith” was the twelfth most popular girl baby name in the country. “Eileen” was way down the charts at #113. As you can see from www.names.org’s handy graph above, “Eileen” had languished in a similar range after enjoying modest popularity in the early 1920s.

Multiplying these two independent probabilities gives you the odds of drawing a pair of "Grandma Eileen" cards from the baby name deck: 1 in 2,239,140,170. 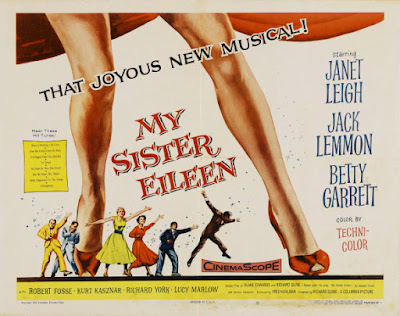 I'm more interested in another question – what caused the sudden spike in Eileen’s popularity between the births of Eleanor’s grandmothers? My Sister Eileen.

In 1942, Columbia Pictures released the movie version of this successful Broadway play. My Sister Eileen was originally based on a series of autobiographical short stories Ruth McKenney published in The New Yorker. The movie was so popular it soon inspired a movie musical remake with Janet Leigh and Jack Lemmon, as well as a separate Broadway musical.

Every version has the same plot:

Sisters Ruth and Eileen move from Ohio to New York to make it big. Ruth wants to be a writer, while Eileen is an actress. The rent a dreary basement apartment in Greenwich village, and meet a cavalcade of quirky New Yorkers. Ruth is the dreamy, quiet one. In contrast, Eileen is arrested after accidentally starting a riot. I’ve never seen My Sister Eileen. However, I’ve attended a production of the musical Wonderful Town, which is based on the same story. Wonderful Town has a lovely score by Leonard Bernstein, with lyrics by Adolph Comden and Betty Green. As I was doing research for this essay, I discovered Rosalind Russell won the 1953 Best Actress Tony for playing Ruth in the original Broadway cast of Wonderful Town.

I love Rosalind Russell. She’s amazing in classic movies from His Girl Friday to The Women. In fact, Russell’s iconic performance as Auntie Mame was one of two primary inspirations when we named our second daughter “Rosalind.” (The other homage was to Shakespeare’s sparkling heroine in As You Like It.)

Then I noticed that Rosalind Russell also played Ruth in the original 1942 movie version of “My Sister Eileen.”

As it turns out, both my daughters are named after the same pair of sisters. What are the odds? 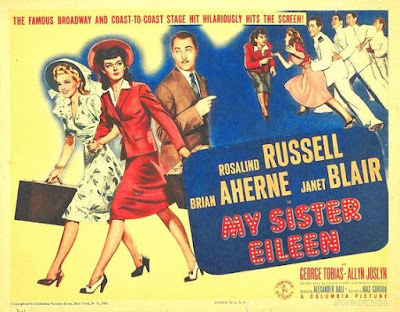 Yes, I realize the title of this essay could also be
"How Rosalind Got Her First Name." Stay tuned.