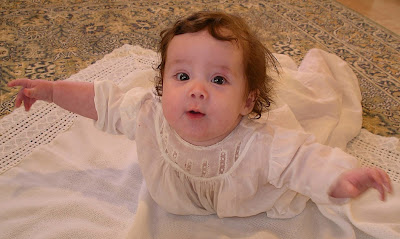 This is my daughter Eleanor. I watched as she was born twelve years ago. In the picture, she is flying in the same christening gown her great, great, great grandfather wore when he was baptized.

Eleanor isn't wearing my ancestor’s dress. I grew up Mormon, remember? Turbo-Mormon. Eight generations of hardy Utah pioneers Mormon. Missionary in Korea at age 19 Mormon. Valedictorian of Brigham Young Fucking University at age 22 Mormon. After I left the church, one of the Twelve Apostles of the Mormon Church called me “probably the biggest disappointment of all my students and friends at BYU.” I grew up that Mormon. And a Mormon just believes infant baptism is evil. (Tween baptism is fine. Trust me, they need it.)

Our faded heirloom christening gown, further yellowed by Eleanor’s nonstop vomiting, came from a real Lutheran baptism. Not one of those liberal-ELCA-female-minister-spritzing Lutheran christenings. This icy baptism would have welcomed the baby into a community of hardcore Missouri-if-not-Wisconsin Synod Lutherans. My children’s other dad comes from those good people. But these days he and his husband take the kids to a welcoming liberal Lutheran congregation across town instead.

Unlike Lutherans, Mormons have no liberal “ELCA” wing. Other than creepy polygamists, every Mormon you meet is part of one big hardcore Utah Synod. And no, the excellent Sunstone annual symposium next week doesn’t count as a Synod. Sunstone is more of a support group for misfits. Like drama club.

So you’ll be relieved to know our kids are not going to Mormon church camp this year. Or any year. I once told my daughter Rosalind one of her Mormon cousins wouldn’t be joining us for Thanksgiving dinner because she was away on her mission. She gasped. “You mean a spy mission?” I said yes. I never lie to the kids.

Eleanor was christened in Great-Grandpa’s dress before God, her two dads, my longsuffering Mormon parents, my sainted Lutheran mother-in-law Judy, and Eleanor’s gay chorus godfather John. By the English-accented rector at Saint Augustine’s Episcopal Church. But that’s another story. [Ed. note. Sorry, still no hyperlink to the future.] And here you were guessing I'm Jewish. [Ed. note. Gotcha again.]

It’s true I have not been to church for some time. That’s yet another story. The title of the book I'm working on is Anyone Can Whistle: A Memoir of Showtunes, Religion, and Mental Illness. You'll have to wait to find out many of the details.

As I drove to church yesterday morning, I attempted to calculate how long it had been. I came up with something like seven years. Not counting listening in the dark to Compline in Seattle, or attending the glorious high church services at Saint Thomas Fifth Avenue in New York. They’re both better than church.

The rector of St. Paul’s Episcopal church in Bellingham is on vacation this month, so the sermon yesterday was by the local youth pastor, Father Josh. When I was a new lawyer, Father Josh was still in college. Now he is the Episcopal chaplain at Western Washington University. I was the general counsel at Western myself, until I was fired for being disabled and gay by my unchristian employers at the Washington Attorney General’s Office.

I first met Father Josh twenty-five years ago. We both sang second tenor in the excellent Cathedral Choir at St. Mark’s Episcopal Cathedral in Seattle. Father Josh, then just Josh, was our young choir mascot. No one who sang with us in the choir would have guessed we’d both grow up to be such cool dads.

Before St. Mark’s, my choir experience was limited to elementary school. I much preferred theater throughout high school, college, grad school, and law school. After graduation I still needed some kind of creative outlet, but acting would never fit the schedule of a brand new lawyer at a big law firm.

Saint Mark’s was the perfect place for me to begin the 90s. Newly admitted to the bar, fresh from kissing my first guy, the Saint Mark’s community helped me put down roots in Seattle. And to finally finish coming out. Meanwhile, Saint Mark’s amazing music program introduced me one of the great delights of my life today, the centuries of church music comprising much of the Classical canon. Those philistine Mormons had kept it from me. (Just like coffee, sex, and alcohol.) Singing in the Cathedral Choir taught me the music fundamentals I have relied on for twenty-two years in Windy City Gay Chorus, Seattle Men’s Chorus, and now Vancouver Men’s Chorus.

In hindsight, joining the choir at Saint Mark’s turned out to be one of my very few smart choices ever. Or maybe I was just lucky – wandering through the door as a choral neophyte during the muddled interregnum between the Dean suddenly firing the Cathedral’s old beloved brilliant musician, and the Dean replacing him with the then-new beloved brilliant musician. Or something.

In the Mormon church, the children’s program is called “Primary.” We sang songs like “I Am a Child of God,” “Pioneer Children Sang as they Walked,” and “Popcorn Popping on the Apricot Tree.” When I was in Primary, “Blazers” was the class for the oldest boys, just before turning twelve and graduating to Boy Scouts. Being a Blazer was a great honor, but a lot of work. You had the opportunity to earn pins and badges and stuff. The most important emblems went on your personal Blazer banner. You earned each by memorizing various passages of scripture, or by meeting some attendance or worthiness milestone.

I never liked the little metal emblems on the lower part of the banner. They bent easily and soon fell away. Of course I still jumped through whatever arbitrary hoop each represented. Gotta be perfect to please these people.

But I loved the glass medallions on the top part of the banner. Each contained some forgetten olde tyme scripture image. My favorite cuff links look just like them, but with map images. Those Blazer medallions were almost as beautiful. They shone. They magnified. They stuck to the banner. God, I wish I still had my naugahyde Blazer banner from the 70s. (I stole the picture from John Hamer, now a gay Missouri Mormon.)

In Blazers you earned a medallion by memorizing and reciting each of the thirteen Articles of Faith, which are like a catechism of Mormons’ most basic beliefs. Obviously I had to earn every one. The most coveted medallion was for memorizing the Thirteenth Article of Faith. Thirteen was much longer than the other twelve. That year I was the only boy in our class who could make it by memory all the way to the end. I still can. It happens to be what I believe:

We believe in being honest, true,
chaste, benevolent, virtuous,
and in doing good to all men;
indeed, we may say that we follow
the admonition of Paul—
We believe all things,
we hope all things,
we have endured many things,
and hope to be able to endure all things.
If there is anything virtuous,
lovely, or of good report or praiseworthy,
we seek after these things.

While visiting my parents in Bellingham years ago, I would sometimes tell them I was heading over to Episcopal services at Saint Paul’s. Really I was just going stir crazy at home, and needed an excuse to meet some unsavory character for brunch. I’d only driven by the church before yesterday.

Turns out Saint Paul’s is quite nice. Decent music. Good sermon. During the announcements after the service, Father Josh asked any first-time visitors to raise a hand. Our conductor Willi does the same thing with the audience at each VMC concert, so I couldn’t resist. The ushers then gave each of us one of these cards: 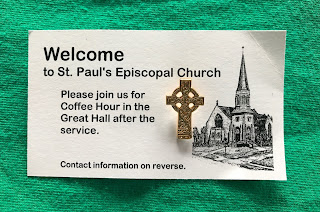 In my whole life, no one ever gave me a pin just for showing up before.