What I Would Rather Be Listening To 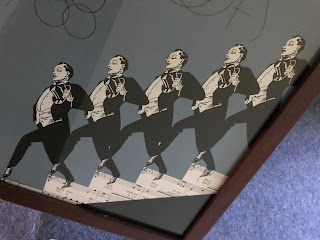 Classical music seldom makes it to the top of the listening charts, however. It’s about the words.

Much as I love music, deep down I’m really an English major. And I love writers who not only write well, but who can also find someone to make their words sing – especially the rare writers who do all the composing by themselves, like Cole Porter and Stephen Sondheim. I listen to things like Tin Pan Alley and the Great American Songbook, the Beatles and Leonard Cohen, Broadway old and new as long as it’s good, all as interpreted by the vocal masters. My collection includes jazz albums, cabaret compilations, original cast recordings, plus stacks of Ella Fitzgerald and Frank Sinatra and their marvelous ilk.

I enjoy all kinds of voicings and orchestrations, from solo to group, big band and piano bar to gay chorus and Beethoven’s Ninth. But if pressed, I would probably express a preference for a cappella male vocals.

Earlier this year, Vancouver Men’s Chorus sang in a concert headlined by Chanticleer. These twelve men based in San Francisco are the best vocal ensemble I know. They sing flawlessly in every possible musical style. I loved their Rachmaninoff vocalese. But the highlights of Chanticleer’s concert were their renditions of “Love Walked In” and “Somebody to Love.” Both songs showcased elegant arrangements of a classic melody weaving between the verses, chorus, and bridge, with varying voices singing solo, duo, trio, quintet, polyphony, and tutti in turn. It's my favorite kind of vocal arrangement.

You recognize the appalling thing I just described, don’t you? A Whiffenpoof song. I've now revealed my deepest, darkest secret.

Not the actual “Whiffenpoof Song” itself. Just a beloved pop standard in the style perfected each year by Yale’s fourteen Whiffenpoofs, the Ivy League’s oldest and best a capella singing group. [Ed. note: Chanticleer is beyond perfection or comparison.] Many of my favorite songs come from Whiff versions -- "Midnight Train to Georgia," "Everything Happens to Me," "For All We Know," "Too Darn Hot." I own Whiffenpoof albums from four decades. I've attended Whiffenpoof concerts in four decades. Who knew Robyn’s “Call Your Girlfriend” works best as a PFLAG coming out anthem?

But I’m an equal opportunity fan of all things Whiffenpoofy. I watch Pitch Perfect and Pitch Perfect2 with the kids -- but only the musical numbers, the plots are beyond me. I know the words and music to everything ever written by Gershwin, Porter, Kern, Arlen, Sondheim, Bernstein etc. One of the best things about attending Yale Law School, even better than the humane lack of grades or the perennial #1 ranking, was the chance to attend concerts regularly featuring a wide variety of collegiate a capella ensembles....

My daughter Rosalind is right, I’m never going to have another boyfriend.