Adoption Stories: What happens at Walmart....

Your adoption roller coaster ride began with the bitter ending to Carrie and Shawn's story. As I wrote a couple of weeks ago, when Carrie and Shawn decided to keep their baby our social worker suggested we work through our grief by writing a “Dear Baby” letter to the little boy who was never really ours.

Here is the rest of their story:

My ex-sister-in-law lives in Fremont, Nebraska, which is an hour west of Omaha, and twenty minutes south of Hooper. Ten years ago, her favorite activity was to hang out for hours with her friend Carrie, shopping at Walmart without actually buying anything.

Carrie was a sob story. Her abusive boyfriend Shawn was in prison, and she was raising three kids alone. And she was pregnant with a baby they didn’t want and couldn’t afford. Wouldn’t it be nice if she knew a nice couple who wanted to adopt a little boy?

We got a call. After deciding we were ready for another kid, we asked our marvelous adoption lawyer Raegen Rasnic to help us figure out the mechanics of adopting a baby from Nebraska. (Hint: it involves hiring various lawyers and social workers in multiple states.) In Washington, you can voluntarily assist a birth mother with her expenses during pregnancy, as long as you acknowledge she has no obligation to go through with the adoption or to pay you back, and you get an order from the court approving everything in advance. So Raegan got to work, and we made arrangements to help with Carrie’s rent and utilities. Each month we also sent her a Walmart gift card for incidental expenses.

Before you indignantly climb into high dudgeon, I hasten to disclose that U.S. tax laws promote adoption, and everything we spent over the years on both successful and disrupted adoption placements was eventually covered by generous tax credits. Adoption should never be about the money. But you’re welcome to be indignant about everything else Shawn and Carrie did.

Things were going fine until Shawn got out of prison. He moved back in with Carrie and the kids for the last month of the pregnancy. Shawn started being the one to answer the phone for our regular calls. He became increasingly belligerent and greedy.

This was one of those times when having multiple disorders magnifies the challenge of mental illness. My ex sensed from the beginning that something was wrong with Carrie’s story. In contrast, I was doubly stressed. As with Eleanor’s preternaturally smooth adoption process, anxiety made me catastrophize – losing sleep and appetite because everything in my life is doomed to failure. Anxiety is like paranoia - just because you're right this time doesn't mean you get to avoid the stress. They are out to get you. Meanwhile, my codependency means I often “do not recognize the unavailability of those people to whom I am attracted,” and “remain in harmful situations too long.” Or is that because I'm a Taurus?

You already know how this chapter ends. The week before Jason, Eleanor, and I were scheduled to fly to Nebraska to celebrate Christmas with our new baby and Jason's extended family, I got a touching email from Carrie explaining how preparing for the holidays with her three kids made her realize she wanted to keep her new little boy after all.

As I wrote in my Dear Baby letter ten years ago, “You’re not here – you never were here – you’ll never be here – and still I miss you terribly and always will.”

My 2007 self dropped a prescient hint in that same Dear Baby letter: “I can’t help wondering if he’s secretly sold you to someone else, or when exactly Carrie changed her outlook so dramatically.”

Sure enough, several weeks into the new year, my sainted ex-mother-in-law Judy ran into Carrie's entire happy family at the Walmart in Fremont. Except there was no new baby boy. Gentle inquiries to adoption professionals in Nebraska confirmed my suspicions. Shawn and Carrie indeed sold their baby to someone back east for more money.

Before resuming our indignant hike up Mount Dudgeon, let us pause a moment to express our thanks. At least the baby didn’t end up getting raised by Carrie and Shawn in Nebraska. Or by that begrudging homophobic family in Washington.

I’m a sucker for movies that make you sit through endless credits after The End before you get to see The Real End.  And then The Real, Real End.  (My impatient children refuse to sit in the theater and wait with me.)

In sorting through the financial mess from our disrupted adoption a few weeks later, I realized – as with Comcast ten years later – I had made some duplicative utility payments. It turns out Shawn had taken my $474 check made out to City of Fremont Utilities, endorsed it to himself, and convinced some cashier at Walmart to give him the cash.

This was back before I was diagnosed with PTSD. I could still handle stressful customer service encounters without the need for a routine trigger warning. So I called Walmart, and then the local police. Each told me I needed to come back to Fremont and complain in person.

Unfortunately, I’ve already crossed both Nebraska and Walmart off my bucket list. 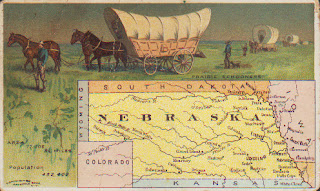