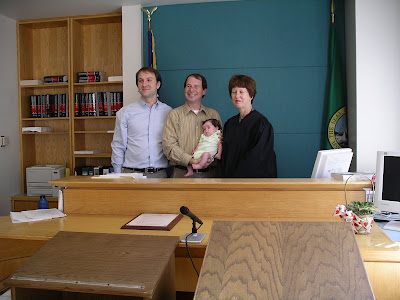 After the final court hearing for Eleanor's adoption, our marvelous lawyer Raegen Rasnic told me it was the smoothest adoption she had ever seen. At the time I thought she says that to all her clients.  Twelve years later I realize it's true.

I've been meaning to write about the roller coaster experience of becoming an adoptive parent, but I didn't know where to start. Then while going through old computer files I found this – the "Dear baby" letter our social worker suggested we write to help work through our grief after the birth mother we supported through her pregnancy told us she had decided to keep the baby. This happened just days before we were supposed to fly to Nebraska and get a newborn baby for Christmas. (I'll tell more of the tragicomic story in another episode of Adoption Stories.)

Reading it still brings tears to my eyes. I haven't changed a word since I wrote this a decade ago:

I don’t know what your parents will call you, but just last week you had become “Henry Graeme” to us.  We had crossed some line from planning to adopt another child to planning to adopt you. Physically we’d finally taken big steps like getting out the cribs and telling everyone we know about the upcoming Nebraska trip. Emotionally I’d taken even bigger steps, letting myself believe in you and in the future that contained you in our family. Nothing in my life had fully prepared me for the joy of being Eleanor’s papa, and I let down my guard and dreamed of magnifying that joy with you.

Now you’re gone, or at least the dream and future with you has vanished, and all I can see ahead is darkness.

I’m trying to be happy for your parents and wish them well in their choice to add you to their family instead of ours. Everyone knows that things will almost certainly be much harder for you there than they would have been here, but it’s not fair to be a snob and make fun of their trailer park life. You’ll have big brothers and lots of people to love you, and kids are tough, so you’ll grow up and be yourself. Just a very different self.

I am angry at your father, and a little bit at your mother – partly to distract myself from being so sad, and partly because I feel abused and stupid, and I don’t like that.  I don’t really begrudge the $8000 we chose to throw away on this always-imperfect opportunity (well, other than the fact that we’re broke and can’t afford to try this again right now), but I’m bitter about the extra $1500 that Shawn cheated us out of, and can’t help wondering if he’s secretly sold you to someone else, or when exactly Carrie changed her outlook so dramatically.  I kick myself for joking last week that they would go through with it just for the last $200 Wal-Mart gift card. And I dread the inevitable recriminations and eventually disclosure of what happened. Hopefully the vindictive impulses will end soon – getting either of your parents in trouble with the authorities isn’t going to bring my dream back, and the real victims would be you and your poor siblings.

Out of all the adoption books I’ve read, right now I’m drawn to the story of the supportive adoptive parents who were rejected after the birth, but still sent flowers to the birth mother in the hospital. Is that a magnanimous or a pathetic gesture?

Jason says he always felt there was something not-quite-right. I was the opposite, seeing parallels with Eleanor’s arrival, and I was all too willing to believe that everything was working out just right.  I resisted my ordinary impulse to assume the worst, and instead let myself want something. It’s experiences like this that send me back into my shell.

Almost a week letter I still am in a daze. I feel the kind of loss I’ve rarely experienced before, only on other occasions when I passionately wanted a different future to unfold – not getting jobs or scholarships I’d counted on, or losing vital court battles, all times when I wanted and believed something would happen to the point of dreaming about it.

A “disrupted” adoption placement is like a miscarriage, a profound near-parental loss. All three of my sisters in law have had difficult miscarriages, including losing the first grandchild after nine full months. They leave a hole in your family where something was supposed to go.

In other ways this is most like the couple of times when I’ve been unexpectedly dumped by a boyfriend – the same feeling of rejection, the impulse to argue uselessly for a reprieve, the willingness to utterly humiliate yourself, the foolish hope that they’ll change their minds, the shock and disbelief and grief over the lost future. Time heals all wounds, they say, and the immediate pain indeed fades, but this will leave a tender scar.

After decades of school and even longer away, a relative handful of lessons have stuck with me. Several are from my introductory class as a college English major a quarter century ago, including my professor’s vivid example of an effective poem title:  “To the Little Girl We Didn’t Know We Weren’t Going to Have.” The author writes of her confusion and loss at having a miscarriage before she even knew she was pregnant.

I don’t remember the poem, just the title, but it fits my feelings now. I didn’t know we weren’t going to have you – obviously if we’d known it wasn’t going to work out, we never would have let it get this far. Too far.  But now we’re not going to have you in our future, and in our family. You’re not here – you never were here – you’ll never be here – and still I miss you terribly and always will.

From the Papa you’ll never know you weren’t supposed to have.