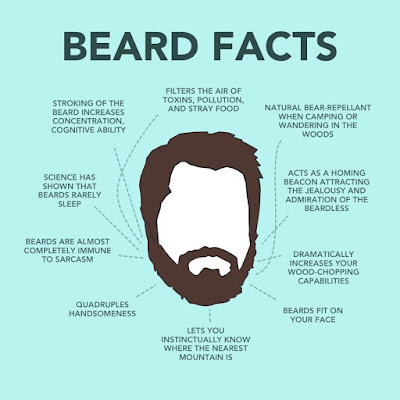 I never wanted a goatee until I couldn’t have one.


I didn’t used to be a facial hair person. Nevertheless, every Christmas for the last twenty-five years I stopped shaving in honor of Winter Break. It’s become a combination time-lapse photographic record / sociology experiment.

For most of my 30s and 40s, the beard barely lasted the two weeks of break. One year, very long ago, the beard survived until October. (There were extenuating circumstances – I was afraid my boyfriend would dump me if he saw my chin.) A couple of other times I made it to March before the itchiness drove me crazy.

As you can see from the vintage photo, my beard wasn’t always so white. I blame my children. As usual.

When I reached my 50s, I began keeping the beard until spring. I've decided it works for me. When you’re basically chinless, a beard is a useful framing device for your round face. (Apparently, like everything else, Shakespeare figured this out much earlier in his writing career.) Once you get past that prickly initial phase, beards are nice and soft. And you soon appreciate the freedom from shaving every day.

I also felt a duty to provide truth in advertising. Even though in my mind I look like a bohemian grad student, in reality I’m a middle-aged dad who drives a minivan. It was time to embrace my true identity.

The last couple of years I started the beard in September. It’s okay to wear white after Labor Day.

This year I realized I’m the only gay man in America who’s never had a goatee. So I emerged from the bathroom looking like this:

Everyone in the living room shrieked, even Oliver and the dogs. Eleanor said the dark patch in the middle made me look like I’d drooled gravy.

Shaving off the white bits made my children shriek even louder. So now I’m clean shaven once again.

Sigh. By the time I get to have a goatee they’ll just be for straight people. 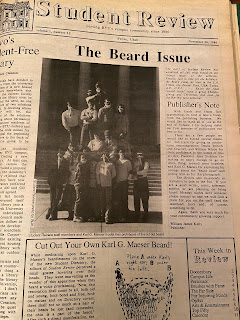