Yesterday I wrote about “equivocation,” and how Jesuit priests like the Elizabethan poet Robert Southwell nudged the meaning of the word from mere ambiguity to “the use of ambiguous language to conceal the truth or to avoid committing oneself.” 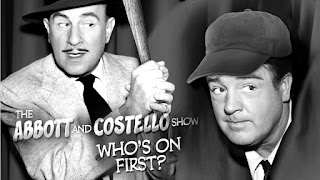 In modern English, the word “equivocation” also is a technical term used in logic.

Regular readers will recall my interest in the power of various types of logical fallacies. The fallacy of “equivocation” is using the same word or expression in multiple senses throughout an argument, resulting in a false conclusion. And confusion.

For example, in Abbot and Costello’s famous "Who's on first?" routine, the source of Costello’s bewilderment is the use of the same word – “Who” – as both the given name of the first baseman, as well as in its ordinary linguistic sense as a pronoun referring to some unnamed noun.

Words are slippery. But fun. Except when lawyers are involved.
at December 07, 2017