“Multi-tasking” may be most pernicious curse of modernity. Stimuli bombard our senses, obligations pull us in conflicting directions, and we delude ourselves into believing we can save a little time by doing at least two things at once. The frustrating result is a life of exhausted half-assery.

It’s true some very complicated tasks can nevertheless become matters of routine, freeing up our attention for other things. The most obvious example is driving. On a familiar road, in safe conditions, most of the time we are barely aware we are operating a piece of heavy equipment at high speed. I particularly enjoy my regular drive between Vancouver and Bellingham. These peaceful interludes alone in the minivan give me a chance noodle over writing projects, contemplate grocery lists, and practice not-quite-memorized chorus music.1 Other complex yet common activities that can be well-suited for fruitful autopilot mode include work meetings, house-cleaning, and, unfortunately, sex.


1Public Service Announcement: Driving on autopilot still requires a significant measure of our attention, as well as the capacity to immediately switch our entire mental focus back to the road – abandoning appropriate secondary tasks like conversation or carpool karaoke. Other alternative tasks, such as texting, require too much attention and bandwidth to be combined with driving. Distracted drivers are terribly dangerous. 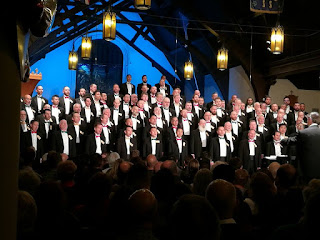 Yesterday Vancouver Men’s Chorus successfully closed out the long 2017 holiday season after countless rehearsals, two performances on Vancouver Island, six sold-out shows in Vancouver, and a charity outreach concert. For the first time ever, I volunteered to sing a solo. (It required someone to present the Jewish point of view.) Fortunately, my fleeting solo came and went each night without any microphone glitches, wardrobe malfunctions, or PTSD episodes.

Often a community chorus will rehearse for months for just one or two performances. I prefer having the opportunity to perform multiple times. Opening night offers a thrilling adrenaline rush, but it’s more fun to reach the point where things come together in a smooth routine. Eventually you have the words, notes, and even the choreography down. The audience gets a polished, unterrified performance. And you can focus your attention on the artistic details.

Anyone who’s ever been on the board or budget committee of an arts organization appreciates the vital role played by our community holiday traditions / cash cows. Like VMC and the ballet, Seattle Men’s Chorus performs their annual holiday concert numerous times during December. Every audience deserves a great show. Midway through each long concert run, SMC’s longtime conductor Dennis Coleman would begin reminding us we all needed to concentrate.

The 1940 Broadway musical Pal Joey is less well-known than Gypsy, although you’d probably recognize some of the songs from its classic Rodgers & Hart score. The lyricist, Lorenz Hart, was both a hopeless romantic and a tortured self-loathing closet case. Hart is responsible for some of the most sophisticated yet bittersweet lyrics in the Great American Songbook, including “My Funny Valentine,” “I Wish I Were in Love Again,” and “Bewitched, Bothered, and Bewildered.”

One of the characters in Pal Joey is a reporter who appears in just one show-stopping scene. She claims her greatest interview ever was with the noted intellectual / terpsichorean ecdysiast2 Gypsy Rose Lee. The reporter, played most famously by Elaine Stritch, asked Ms. Lee what she would think about each night as she performed her striptease. Her answer is the song “Zip!”


2Terpsichore was one of the nine muses, and the Greek goddess of music and dance. “Ecdysis” is the term for the shedding of an outer layer of skin by snakes and other animals. 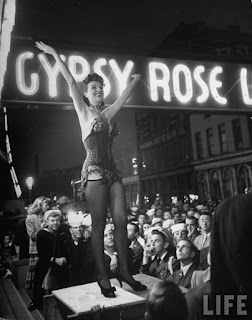 I’ve interviewed Leslie Howard.
I’ve interviewed Noel Coward.
I’ve interviewed the great Stravinsky.
But my greatest achievement
Is the interview I had
With a star who worked for Minsky.
I met her at the Yankee Clipper
And she didn’t unzip one zipper.
I said, “Miss Lee, you are such an artist.
Tell me why you never miss.
What do you think of while you work?”
And she said, “While I work
My thoughts go something like this:”

Zip! Toscanini leads the greatest of bands.
Zip! Jergen’s Lotion does the trick for his hands.
Zip! Rip Van Winkle on the screen would be smart.
Zip! Tyrone Power will be cast in the part.
I adore the great Confucius,
And the lines of luscious Lucius.
Zip! I am so eclectic.
I don’t care for either Mickey-
Mouse and Rooney make me sicky!
Zip! I’m a little hectic.
Zip! My artistic taste is classic and dear.
Zip! Who the hell’s Lili St. Cyr?3

3Lili St. Cyr was a famous burlesque performer and thus one of Gypsy Rose Lee’s competitors. But you would already know that if you’d seen Rocky Horror Picture Show a million times. Susan Sarandon’s scantily-clad Janet ends the song “Don’t Dream It, Be It” with the words “God Bless Lili St. Cyr!”

Here’s a YouTube link to a video of Elaine Stritch performing the entire song. 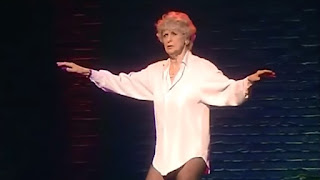 The VMC song containing my stressful brief solo lines came at the end of the concert’s first act. So during the second act of yesterday’s closing night, I was finally able to let go and relax. The chorus and band were polished. I had the words, notes, and even choreography down. My mother, daughter, and friends all enjoyed the show. I smiled at the audience.

I was in the zone. At times I sang on autopilot. In fact, during the numerous sentimental verses of one interminable ballad late in the show, I wrote this entire blog post in my head. Zip! 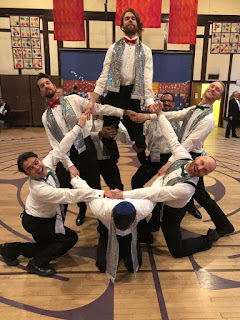