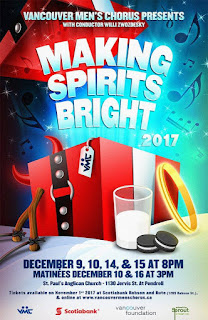 This is hell week for Vancouver Men’s Chorus – tech rehearsal yesterday, dress rehearsal tomorrow, opening night Saturday, and two more shows on Sunday. As usual, my goals are (1) don’t catch the annual communal cold; (2) don’t end up standing in the front row; and (3) don’t accidentally sing a loud solo during a silent rest.

This week is also the time for memorizing those last few numbers that haven’t stuck in my brain yet. Fortunately there aren’t any songs in Icelandic this year. And after singing the same African hymn in three different choruses, I finally remember its Yoruba words. Even the French carol is already familiar, although we’re having a dispute over whether to use Parisian or Quebecois pronunciation.

Instead of weird foreign sounds, this year I am struggling with the text of one of the songs from Benjamin Britten’s Ceremony of Carols. Britten wrote musical settings for eleven early English poems during a transatlantic voyage back to England in 1942. He and his longtime partner/muse Peter Pears were returning home after several years of exile in North America.

We are singing Britten’s sixth movement, “This Little Babe.” The text comes from Robert Southwell’s 1595 poem “Newe Heaven, Newe Warre.” Southwell draws an extended allegorical image of the newborn baby Jesus as a fierce warrior, with alternating descriptions of the nativity and the battle against hell, beginning with:

This little babe, so few days old,
Is come to rifle Satan’s fold;
All hell doth at his presence quake.
Though he himself for cold do shake,
For in this weak unarmèd wise
The gates of hell he will surprise.

The paradoxical poem is in early modern English, dating from the same time as Shakespeare’s plays and the King James Bible. The archaic language is not the problem, since I studied literature from the period in college and grad school. Instead, I’m frustrated by the tongue-twisting tempo. The song is insanely fast, with the tenors, basses, and baritones racing in a canon to a rousing conclusion:


If thou wilt foil thy foes with joy,
Then flit not from this heavenly boy. 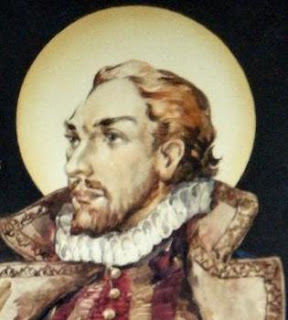 I didn’t remember Robert Southwell’s name from my English major days. When I saw the poem’s publication date on our score, I assumed he was one of the Oxford- and Cambridge-educated “university wits” whose erudition is often contrasted with Shakespeare’s rustic background. However, last week I happened to be reading a book about Britain’s transition from the reign of Elizabeth I to James I.1 The author included an entire chapter about Southwell, entitled “Equivocation.” It turns out Robert Southwell is an actual saint – canonized by the Pope in 1970.

1James Shapiro’s The Year of Lear: Shakespeare in 1606.  It’s an interesting book, but not as good as Shapiro’s Contested Will: Who Wrote Shakespeare, or A Year in the Life of William Shakespeare: 1599.

After the whipsawing counter-reformation of her Catholic elder sister Mary’s reign, Queen Elizabeth restored the Protestant Church of England. Elizabeth also fostered a semi-détente with her Catholic subjects, generally leaving matters of faith to individual conscience. However, the Catholic Church itself was seen as a political threat to the kingdom. During the 1580s, when England feared invasion by Spain and terrorism by supporters of Elizabeth's Catholic rival Mary Queen of Scots, Parliament enacted legislation declaring all Jesuit priests to be seditious traitors. Any Jesuits lingering in England for more than forty days were automatically condemned to death and dismemberment. Harboring them was a felony punishable by death.

In 1586, the Superior General of the Jesuits called two priests on a suicide mission to serve the flock in their native England. The older of the pair, Henry Garnet, was eventually captured and executed in 1606 in connection with the Gunpowder Plot against King James.

Garnet’s missionary companion, Robert Southwell, was born to a Catholic gentry family in Norfolk, three years before Shakespeare’s birth. Southwell went to seminary in Belgium as a teenager, and was ordained as a Jesuit priest in Rome. Southwell volunteered for the mission to England in his early twenties, barely older than a Mormon missionary today. For the next decade, Southwell and Garnet were the only Jesuits in England. They lived separately in hiding, each harbored by devout Catholic families for a few weeks or months at a time.

In 1592, Southwell was living near London with the Bellamy family. Their house was filled with secret hiding holes. Even though the family had been suspected for years of harboring priests, none had ever been caught. Then the authorities arrested Anne Bellamy, aged 29. They handed her over to Richard Topcliffe, England’s most notorious freelance torturer and bounty hunter. Like Trump’s former National Security Advisor Michael Flynn, Anne flipped. (Unlike Topcliffe, Special Counsel Robert Mueller did not impregnate his suspect to gain cooperation. Nor has Mueller arrested any parents who refused to provide a handsome dowry for a suspect’s shotgun wedding to an assistant prosecutor.)

Using Anne’s information about Southwell’s movements and hiding place, Topcliffe captured the priest at the Bellamy home. Southwell was tortured by Topcliffe and interrogated in the Star Chamber, then left to rot in the Tower of London. After his trial three years later, Southwell was hanged, drawn, and quartered.

In addition to his day job as a Jesuit priest, Southwell was a writer. Southwell penned both prose religious tracts and poetry during his years in hiding. Some of Southwell’s works were published in his lifetime, while others were rushed into print – without his name – immediately after his death. Southwell’s writing had a substantial influence on many other writers, including his contemporary Shakespeare. 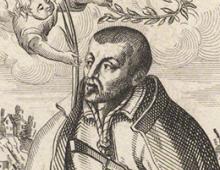 Southwell’s text “This Little Babe” is an allegory. Famous examples of allegories in literature include Edmund Spenser’s The Faerie Queene and John Bunyan’s Pilgrim’s Progress. Allegory is dreadfully out of fashion these days, just like the doublets and jerkins men wore in Elizabethan times.

What is an allegory? Ask an English major. Figurative language encompasses a wide variety of linguistic tools intended to evoke potentially paradoxical images or ideas. ("Figuratively" used to be the opposite of "literally," until young people ruined the latter word.)  For example, “symbols” are concrete things that represent abstract concepts. Writers often use a single symbol to convey multiple unspoken meanings. In contrast, a “simile” bluntly says X is “like” Y, or X acted "as" Y.  A “metaphor” says or implies X is Y. “Allegories” are extended metaphors. Some allegories are exhaustingly over-extended metaphors: The Faerie Queene consists of over two thousand nine-line stanzas. No one has read the whole poem during my lifetime.

In Southwell's allegorical “This Little Babe,” each stanza outfits baby Jesus with the accoutrements of a general preparing for battle. Our brain operates through patterns of association. Figurative language is a particularly powerful mechanism for evoking association, and thus for conveying the author’s intended meaning about the battle between heaven and hell. Or rather, the author's intended meanings: poetry exploits ambiguity by allowing language to refer simultaneously to more than one thing. 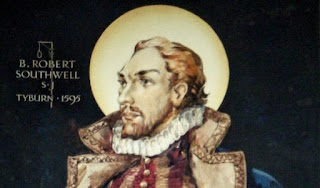 When Shakespeare wrote his first plays in the 1580s, he used the word equivocation in its then-current sense as a synonym for ambiguity. Ambiguity is good – at least if you’re a poet.

In modern English, however, “equivocation” no longer refers to innocent ambiguity. Instead, the word’s primary definition is “the use of ambiguous language to conceal the truth or to avoid committing oneself.” Equivocation can also be used as a synonym for “prevarication,” or plain old “lying.”

The word’s meaning changed almost overnight during the ministry of Robert Southwell and his Jesuit brothers. “Equivocation” was a doctrine that allowed faithful Catholics facing persecution to hide the truth. Southwell’s priestly partner Henry Garnet wrote an underground treatise identifying four different techniques for equivocating. First, you could simply choose ambiguous words. For example, Shapiro’s book gives the example of denying an accusation of harboring a priest by testifying “he lyeth not at my house,” because the priest isn’t telling lies at the house. Second, you could omit important information – saying “I went to the house for dinner” without mentioning you had Holy Communion for dessert. Third, you could exploit ambiguity between verbal and nonverbal messages, agreeing with the questioner “The priest went that way,” while secretly pointing in the opposite direction. (In my playground days we just crossed our fingers.)

The fourth technique was the most controversial: “mental reservation.” This allowed your thoughts to contradict your words. For example, you would testify “I didn’t see the fugitive priest…” then finish the sentence in your mind with “…hide in the attic.” God would know you weren’t lying. Meanwhile, your words would mislead the investigators, judge, and jury. During Elizabethan and Jacobean times, “equivocation” was seen as a pernicious doctrine threatening public order and the rule of law. Shakespeare explored the implications of such disorder in his later works, particularly Macbeth, which seems prescient in our own reality-denying era.

Interest in the Jesuit doctrine of equivocation faded after the end of England’s long Civil War between Catholics and Protestants.  A century later, Ben Franklin wrote a comic verse about mental reservation:

Some have learned many tricks of sly evasion,
Instead of truth they use equivocation,
And eke it out with mental reservation,
Which, to good men, is an abomination.
Our smith of late most wonderfully swore,
That whilst he breathed he would drink no more,
But since, I know his meaning, for I think,
He meant he would not breathe whilst he did drink.

So on opening night, what will I do if I can’t remember Southwell’s words at Britten’s breathless tempo? Sing “watermelon, watermelon,” of course. That’s the word choral singers mumble when they can’t remember the lyrics of a song. But I’ll do it with “mental reservation,” thinking of a baby in military uniform the whole time. God won’t mind.