One of my three children is a hypochondriac.  (We all know which one I’m talking about.)  Someday I may regret my refusal to go to the Emergency Room over an alleged case of bubonic plague or Ebola. But until we move to Canada or the USA achieves universal healthcare, I can live with that risk. 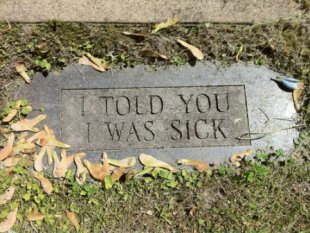 In my first blog post about how brains work a couple of months ago, I described the “Roger drinking game” played by colleagues from my first legal job: “identify a conversation topic that would reduce me to silence.” No one ever won.

It turns out don’t have to go to Yale Law School to play the game. According to Nobel prize-winning psychologist Daniel Kahneman, “The normal state of your mind is that you have intuitive feelings and opinions about almost everything that comes your way.”

In his book Thinking, Fast and Slow, Kahneman describes how our brains rely on two contrasting mental processors, which I've referred to as Thing 1 and Thing 2. The first system is fast and automatic, multi-tasking as it retrieves memories and generates intuitions. In contrast, the second system allocates our brains’ limited conscious attention to effortful mental tasks.

According to Kahneman, one way Thing 1’s automatic system reduces the mental burden on Thing 2 is to “generate intuitive opinions on complex matters.” If the answer to a difficult “target question” doesn’t immediately come to mind, Thing 1 will substitute “a related question that is easier and will answer it” instead of the target question. The substitute question is a “heuristic” – “a simple procedure that helps find adequate, though often imperfect, answers to difficult questions. The word comes from the same root as eureka.”

Returning to my hypochondriac daughter: it's hard to predict occurrences of very rare events. But when you haven't had a single vulpine sighting despite numerous cries of wolf, a reasonable heuristic would be to leave your wolf probability forecast set at zero. 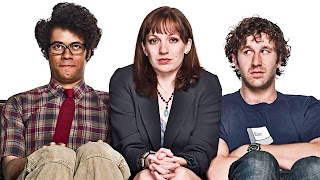 The British sitcom The IT Crowd takes place at the London headquarters of fictional corporation. The IT department is housed in a dingy basement office. The team consists of geeky savant Moss; shy Roy; and their ambitious-but-technically-ignorant manager Jen.

Roy’s exasperation and laziness results in a classic IT heuristic. Regardless of their problem, help desk callers all hear the same tape-recorded question: “Have you tried turning it off and on again?” 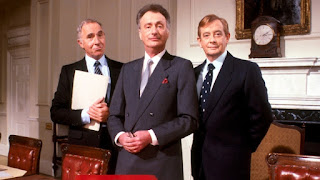 One of my all-time favorite television programs is the 1980s British political satire Yes, Minister, along with its sequel Yes, Prime Minister.  The show centers on the dynamic between a career politician and a career civil servant. Jim Hacker MP is named as Minister of the fictional “Department of Administrative Affairs.” His efforts to implement self-promoting new policies are foiled by the department’s bureaucratic Permanent Secretary, Sir Humphrey Appleby. The Minister’s frazzled Principal Private Secretary, Bernard, is whipsawed between his two masters. Occasionally the Minister and Sir Humphrey join forces against common enemies, such as their rivals’ attempts to reduce government efficiency by eliminating the Department.

All three characters are hilarious, and all three portrayals brilliant. But the highlight of each episode is usually a dazzling speech or colloquy showcasing Sir Humphrey, played by the late gay actor Nigel Hawthorne.

One memorable exchange sums up how bureaucrats evade responsibility for their errors.  Sir Humphey describes this powerful heuristic by cataloging the “Five Standard Excuses” for failure:

Sir Humphrey: First there’s the excuse we used for instance in the Anthony Blunt case.

Sir Humphrey: That there is a perfectly satisfactory explanation for everything, but security forbids its disclosure.

Second, there is the excuse we used for comprehensive schools:  that it has only gone wrong because of heavy cuts in staff and budget which have stretched supervisory resources beyond the limits.

Jim: But that’s not true is it?

Sir Humphrey: No, but it’s a good excuse.

Then there’s the excuse we used for Concorde: it was a worthwhile experiment, now abandoned, but not before it had provided much valuable data and considerable employment.

Sir Humphrey: The fourth, there’s the excuse we used for the Munich agreement. It occurred before certain important facts were known, and couldn’t happen again.

Jim: I thought everybody knew that.

Sir Humphrey: Not the Foreign Office.

Sir Humphrey: Five, there’s the Charge of the Light Brigade excuse. It was an unfortunate lapse by an individual, which has now been dealt with under internal disciplinary procedures. 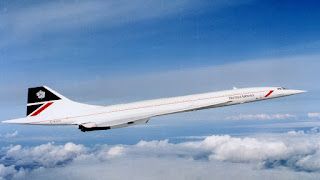 I have the opposite of hypochondria – what Mosby’s Medical Dictionary calls “la belle indifference.” I’ve never broken a bone, or been to a hospital other than as a visitor. I can’t imagine being sick enough to go the ER. I wouldn’t want to be a bother.

Nevertheless, in the last couple of years I have gotten to know my excellent Bellingham doctor. I’ve even figured out his heuristic for me. Whenever I show up with some new complaint, he will select from a repertoire of three standard responses:

1. It's just another typical anxiety/PTSD symptom.
2. It’s a common side effect of my medications.
3. It’s what happens when we get older.

Before my next appointment, he might as well prepare a tape recording of each explanation.

Still, I was encouraged by my doctor’s visible excitement when he got to step outside of the box and diagnose me with Tennis Elbow. It’s good to know his whole brain is working.