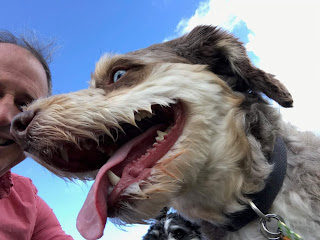 On one of our walks this week, sweet-natured Bear accidentally traumatized a toddler. I gave the mother some pamphlets about Post-Traumatic Stress Disorder.

Unresolved trauma can leave psychic scars, resulting in everything from claustrophobia to fear of flying. There’s a whole cadre of mental health counselors offering “systematic desensitization therapy.” They attempt to reprogram the patient’s amgydala – the almond-shaped brain structure that controls our ancient “fight or flight” instinct. As patients are gradually exposed to a phobic situation, their amygdala gets increasingly accustomed to the specific stressor. Eventually the patient’s brain stops releasing hormones like adrenaline and cortisol into the bloodstream.

In a version of this therapy called “flooding,” counselors simply expose their clients to the full horror of their phobic situation. Repeatedly. Supposedly the amygdala learns from this experience that things aren’t so bad, and stops releasing stress hormones. Laypeople call this approach “sink or swim.” Or “abuse.”


As I wrote earlier this year in “Passive Aggression,” some people are born with a profound sense of place. For example, as you’ve probably figured out by now, I’m mad about Vancouver, British Columbia. Everyone should be – Vancouver is stunningly gorgeous and warmly welcoming. Other than being close to family, the best thing about my move to Bellingham has been spending as much time as possible in Vancouver.

I originally moved up from Seattle four years ago to take a job with the Washington Attorney General’s Office as chief legal advisor to Western Washington University. As I’ve chronicled on this blog, the job didn’t work out. But the kids are thriving here. Despite the occasional biblical plague, now I’m thriving here too. Even though my parents moved to Bellingham thirty-eight years ago, this summer for the first time Bellingham felt like my home. 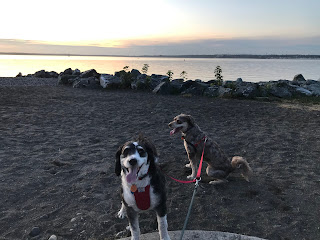 Western Washington University is Bellingham’s largest employer and our dominating community presence. Other than when I worked at Western during 2015-16, I’ve always been a townie. Nevertheless, I’d occasionally visit the university for school events and community meetings. The girls' high school is across the street from Western. Despite my PTSD and various unpleasant work memories, I haven’t had any serious qualms about visiting campus. At least most places on campus.

A couple of years ago I needed to meet someone in Old Main, where my office as the university's general counsel was located. Although I’d walked by the building a few times, I hadn’t been back inside since the Monday morning in 2016 when my supervisor’s supervisor’s supervisor arrived to take away my keys, and sent me home forever.

I was nervous as I walked through Old Main's long halls. However, as with my other cautious visits elsewhere on campus, I was relieved to find the building itself didn’t trigger any PTSD symptoms. Then I unexpectedly saw one of my abusers.

Except I didn’t see actually her. Half my visual field disappeared. I literally, clinically, and visually disassociated. This was one of only two or three times in my life when something like that has ever happened to me.

I haven’t been back inside Old Main since then. And I became nervous about returning to campus at all. 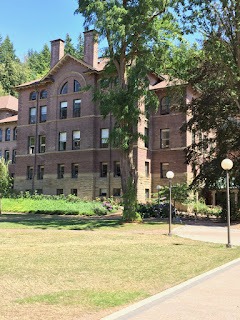 “Aversion therapy” actually refers to treatment where the patient is exposed to a stimulus while simultaneously subjected to some form of discomfort. The purpose of aversion therapy is reduce the likelihood of engaging in the targeted behavior. For example, when one of my children developed a nail-biting habit, I ordered a nausea-inducing nail polish. Of course my child merely acquired a taste for nasty nail polish.

In August my ex and his husband filed for divorce, and my ex moved to the Midwest to start a new life. The kids will be staying with me fulltime, but they look forward to visiting Daddy during school breaks.

To make the transition as smooth as possible for the kids, I ended up taking over their lease on a comfortable ranch house. It’s been an adventure. After all these years living with Victorian antiques under cathedral ceilings, who knew I really belonged in a mid-century modern rambler? With a couple of dogs?

Our house is perfectly located up the hill from historic Fairhaven Village and Bellingham’s charming waterfront boardwalk. The neighbors are comically friendly. We’re close to the kids’ schools.

We’re also just a block from the university. All of the dogs' favorite routes for walks go through campus. They're particularly fond of the rose garden next to Old Main.

Despite the unfortunate circumstances of my departure from the Washington Attorney General’s Office three years ago, I bear no ill-will toward any of my former clients at Western Washington University. To the contrary, I enjoyed my time at the university, and would welcome the opportunity to be part of the campus community again. Folks in Seattle can only dream about such a lovely setting and effortless commute.

Unlike typical wrongful termination settlements with the State, the Settlement Agreement that my lawyer negotiated does not bar me from seeking employment with Western or other state agencies. Indeed, one of the parties’ intentions when we mediated my claim was to facilitate efforts to find suitable employment in the Bellingham area. Every time there’s a lawyer-adjacent job opening at the university, I submit an application.

So far I haven’t gotten any interviews. My mother says it’s because my blog writing is too frank. But the Washington Law Against Discrimination forbids employers from retaliating against applicants who previously asserted their right to be free from discrimination. My Settlement Agreement with the State goes an step further and prohibits my former employers from saying anything about me beyond my name, rank, and serial number.

I think Western hasn't invited me to interview for any of these jobs because I’m a middle-aged white guy. Or gay. Or lavishly overqualified. In any event, hopefully by the time Western is ready to hire me, I’ll be ready to go back to work. 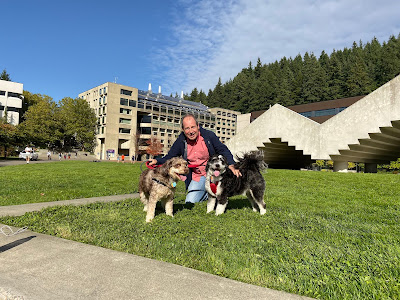 The modern words “aversion” and “avert” come from old Latin and English roots meaning “to turn away.” Who can forget the classic exchange in Monty Python and the Holy Grail between King Arthur and God:

Avoidance, denial, and repression can be useful coping mechanisms in a crisis. But they’re not healthy longterm strategies.

Sometimes we can overcome the effects of traumatic experiences by desensitizing ourselves – directly facing the unpleasant stimuli, and persuading our brains we have nothing to fear. Other times we can channel negative energy into positive endeavors. Or we can avert disaster by plotting a new course.

A couple of weeks ago, I was copied on an unexpected letter from a government lawyer who should have known better than to burden us all with clumsy lies. Reading the letter predictably triggered a rush of PTSD symptoms. Fortunately, I was able to take the dogs on a long walk through campus and the arboretum.

Therapy can go from being a crutch, to a tool, to a muse. Recently I wrote about my experiences in "Walking the Dogs":

As we begin our walks, I’m often still stewing over some lawyerly letter, or another futile job application, or a Machiavellian public records request. I’ve turned into cranky R.P. Tyler from Good Omens as he walks Shutzi – writing letters to the editor in my head in response to each indignation. Fortunately, Bear and Buster refuse to put up with lawyer talk.

On this day we all needed an extra long walk. As we left the house, I was mentally drafting an outraged response letter, plus a snarky bonus email. It helped me soothe my symptoms, process my anger, and channel my energy into something arguably productive.

Then we ran into a lesbian walking her gentle golden retriever through the Quidditch quad on campus. The sun was shining. We chatted as dog people do. For the first time in weeks, Bear and Buster miraculously didn’t bark at the other dog.

As the dogs and I continued our walk, I abandoned my indignant mental letter. Instead, I started thinking about the ways people can learn to overcome adversity. When we got home the dogs napped on the couch. And I wrote down this essay. Fall quarter started last week. On one of our walks, the dogs and I wandered by a horde of students waiting for convocation outside Old Main. I kept hearing sighs of “Ah, cute....” It's never going to be about me.

Change takes time. That can be a good thing. By the time I finally get a job interview in Old Main, Buster and Bear will be certified as “Service Dogs,” rather than mere “Comfort Animals.” So I’ll get to bring them with me. It’s the law. 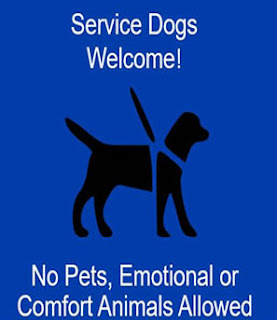